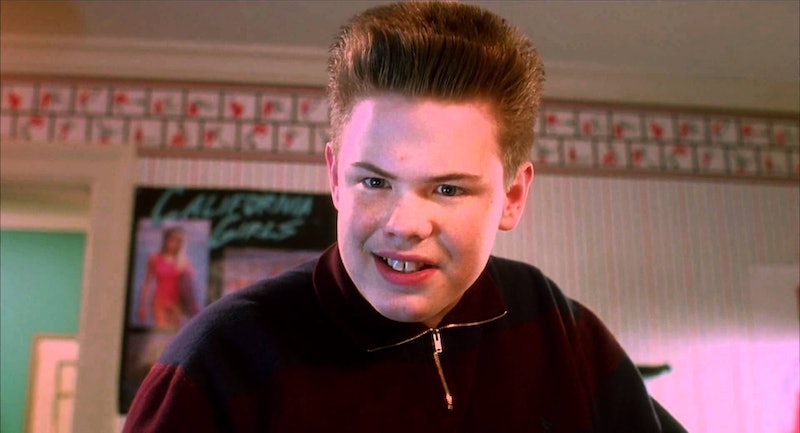 13-year-old Devin Ratray didn't know when he auditioned for the part of Buzz McCallister that Home Alone would go on to gross over $280 million at the box office. But he did suspect that it would be something special, considering the talent involved — and the fact that it wasn't exactly your traditional movie set. Reflecting on the series (which recently turned 25 years old) to Bustle, Ratray recalls scooter-ing around the high school (the same one The Breakfast Club used) with his co-stars, the entire cast — kids and adults alike — letting loose and generally having a great time.

"The ADs would be chasing Mac [Macauley Culkin] around the school on a razor scooter," the actor says, adding that off-set, the extended McCallister clan made the Chicago suburbs their home and playground, getting together outside of work for mall trips and marathon video games sessions. "We all got along rather well and got closer and closer during film production... it was long hours but there were a lot of funny takes, and we were happy and lucky to be there."

Years later, with Home Alone and its sequels now massive successes, Ratray has come to recognize just how lucky he and his castmates really were to be part of such a beloved film. Says the actor, "People felt a familial relationship with me when they would see me on the street... they truly felt like I'd been in their homes during some of the most quiet, intimate Christmas mornings of their lives."

While Ratray understands why Buzz — the McCallister family bully who just wants to meet some French babes — is such an enduring and beloved presence, like many actors who show up to do a job and then find themselves a part of a phenomenon, he didn't come to terms with that perceived closeness immediately. "It took me a while," he says. "Shedding youth and becoming an adult and realizing that this film had become more culture than just a movie."

Still, there's no regrets here, especially when it came to working with writer/producer John Hughes. Ratray says that at the time of the first Home Alone, any film by the Brat Pack director "was going to be a huge project and was going to be an awful lot of fun and something every kid wanted to do." For the actor, Home Alone was his "first film school," and while it was difficult for the actor to envision the "30 pages of slapstick" in the screenplay that describe Kevin's elaborate home invasion defense system, so the final product practically blew him away.

"Once I saw it, it was the largest lesson in filmmaking I'd ever experienced. To see what I read on script just translating into non-stop laughter," Ratray says, "my eyes opened up and I realized, wow, that's the power of cinema."

The enjoyable atmosphere only increased on Home Alone 2: Lost In New York, which the actor describes, fittingly, as "coming back home." Though there were some minor mob scenes that occurred when Ratray and his now-famous co-stars would see a movie or walk through Times Square (Culkin even required a bodyguard), he insists the experience wasn't marred in his eyes. "Macauley seemed totally at ease though and almost relieved when he was on set with us," Ratray says. "He could actually just continue to be himself and continue to be a little kid without any scrutiny or cameras or anything."

After the first two movies in the series, though, many of the actors put a pause on their film careers to pursue other interests. Ratray took a four-year break from the business to attend film school, and in the time since has amassed an eclectic and lengthy list of credits, including roles in features like Nebraska, series like Louie and Agent Carter, and even an original stage musical by the composers of Frozen. ("I'm dancing with 24-year-olds!") When I spoke to him, he'd just come off a day of shooting a mysterious HBO project helmed by director Steven Soderbergh. He's sworn to secrecy on the details of Mosaic, but tells me that if it's successful, it "will be a new genre of a way to watch film."

Yet no matter what new projects come along and how their paths have diverged over the years (Culkin, for instance, has done everything from rock music to Robot Chicken), the original Home Alone gang are forever bonded by the '90s holiday staple. They recently reconnected in honor of the first movie's 25th anniversary, Ratray says. Where? The same place as everyone else: Facebook. Off-set, it seems, the McCallisters really are just like you and me.