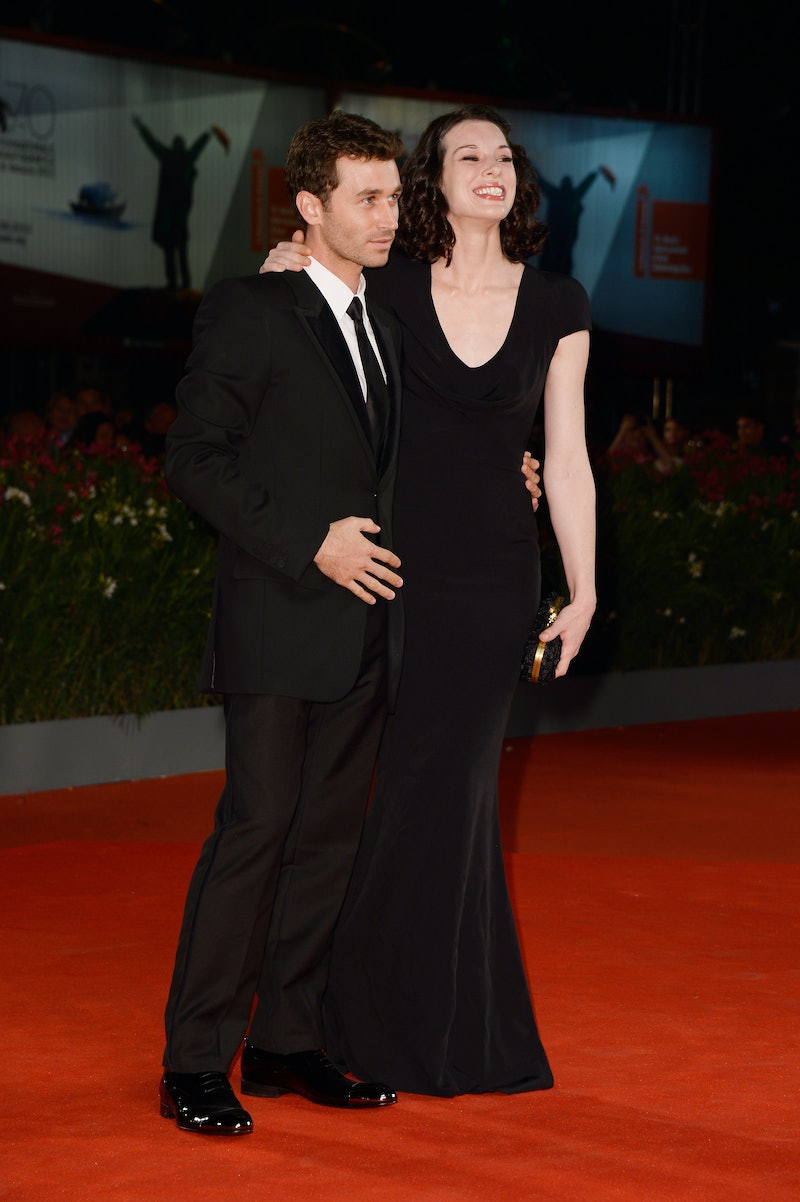 Stoya's allegations on Twitter about her ex-boyfriend mince no words: "James Deen held me down and f*cked me while I said no, stop, used my safeword. I just can't nod and smile when people bring him up anymore," she wrote on Satuday.

Deen responded to Stoya's tweets the following day: "There have been some egregious claims made against me on social media . . . I want to assure my friends, fans and colleagues that these allegations are both false and defamatory."

Twitter has exploded since Saturday with support for Stoya, with many tweets accompanied by #solidaritywithstoya.

According to Who's Dated Who, Stoya and James Deen started their relationship in September 2012. The site adds that the two "got back together in April 2013," which sounds as though there was a split somewhere in there. Indeed, Stoya confirmed that she and Deen were dating in an interview with the Huffington Post in June 2013.

By November 12, 2014, Stoya and Deen had called it quits, according to a piece in the Daily Beast. "'Oh, we’re not together anymore,' he [Deen] says as if he were casually offering me more wine," writes Emily Shire.

Though it's not entirely clear when they broke up exactly, Stoya took to her blog on November 24, 2014, to write about, among other things, giving a blow job to a man who is based in Queens. (Deen is based in Los Angeles, according to his Twitter account.)

Stoya also took to her blog four days before to write rather cryptically about the relationship's dissolution. On November 20, 2014, she wrote:

"I was in a romantic and sexual relationship with another person for approximately two and half years. That relationship ended. I believe it needed to end and that I needed it to end. This belief has no effect on the fact that I hurt in ways I can’t currently understand."

Though the exact dates of Stoya and Deen's relationship are unclear, they definitely knew each other and worked together professionally before September 2012.

"there have been instructional sex tips created from people watching us bang. i am not exaggerating. if you don’t know the greatness that is me and stoya humping then google that shit and do some research. it is terrifying how good we are and having sex with each other."

That said, it seems as though he writes things like this about women he works with all the time, so it's totally possible that they hadn't gotten together yet. While Who's Dated Who reports that they officially got together later that year, in September 2012, it seems as though the two were still navigating how to date as public figures almost a year later. In an interview with the Awl published August 12, 2013, Stoya says:

"So we’re kind of super awkward about it still—at least, I’m super awkward about it still. My boyfriend is really awesome, and I would totally talk about him, except then, things that I say will get quoted. And then things might get awkward. So, as a policy, it’s like, my boyfriend: 'Is it James Deen? I’m not telling you.' Which then in itself is awkward, because everybody knows that we’re dating. I’m still navigating how to set boundaries without being a dick."

To me, this suggests that they started dating a little later than September 2012, almost a full year before this Awl interview. Then again, Deen blogged about having "a heart erection" in a post about Stoya on September 29, 2012, in which he said things like, "stoya is amazing, stoya is beautiful, stoya is intelligent and stoya is MINE." Here he linked to his previous post, from April 2012 (above). In the comments section? Lots of cheerleading, including one commenter identified as Carrie asking, "Awe, you two are cute together, is Stoya the prom queen?" Yes, reported the Village Voice in 2013: "Online, she calls him 'Daddy,' and he calls her 'The Prom Queen,'" they wrote.

My takeaway on all of this? Being a public figure sounds exhausting and really difficult. In the fallout of an already complicated situation, in a time when everything plays out in real time on the Internet, I imagine that all Stoya wants is some peace. Then again, taking to Twitter automatically brings her private life public. Her antidote? Going offline until December 17. Sounds wise.