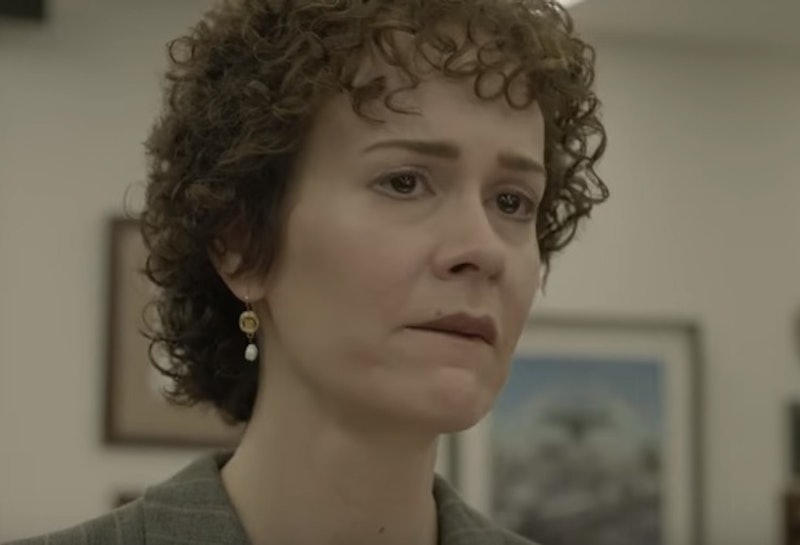 We've known for a while now that one of the most infamous trials in history, the O.J. Simpson case, was getting the Ryan Murphy treatment in FX's American Crime Story: The People v. O.J. Simpson. Now, we've got the trailer to go with it. The gritty American Crime Story trailer is a departure from Murphy's usual glossy fair on display in American Horror Story and Scream Queens , but many of his regulars are on hand. Most notable is the always wonderful Sarah Paulson stepping into the role of prosecutor Marcia Clark. In many ways, Paulson's Clark is the most prominent character in the trailer, proving that while Simpson gets namechecked in the title, there is no mistaking this show is about the trial in all of its messy, attention-grabbing craziness.

The trailer puts all of the lawyers front and center, from Clark bemoaning that she has no desire to be a public figure to Courtney B. Vance as the famed celebrity lawyer Johnnie Cochran. Anyone who was around in the mid '90s will be instantly transported back to watching the case (or watching their parents watch the case) with rapt attention. Based on The Run of His Life: The People v. O.J. Simpson by Jeffrey Toobin, American Crime Story is meant to go inside the world of the prosecution and the defense team as they plead their cases in front of the entire American public — and I have to admit the trailer is an intense, effective ride full of shocking moments (only some of which involve those iconic '90s duds).

It's not just the epic perm she is rocking that instantly allows Paulson to disappear into Clark; it's also her inherent skills as an actress. Just from the sneak peek of her channeling Clark inside the courtroom and out, it seems almost inevitable that Paulson will be looking at an Emmy nomination in 2016 — maybe even two if she nabs one for AHS: Hotel.

Yes, the show is going there. While the main focus is on what happened during the trial, the infamous chase scene is being adapted — including the Simpson fans who cheered the former football player on.

3. John Travolta In A TV Show

Aside from a couple of one-off guest appearances, Travolta hasn't starred in a television series since the '70s. Seeing him pop up in the trailer — even if you knew he was in the show — is one of those mildly surreal moments.

It is easy to forget that the Kardashians being famous is not a recent event. The family became part of the public eye during the Simpson case when Robert Kardashian stood by Simpson as part of his defense team. The trailer depicts not only Robert, but also his wife at the time, Kris.

Simpson is talked about way more than he is seen in the trailer, but Cuba Gooding, Jr. gets his moment to shine when he utters the trailer's most noteworthy line. When he realizes his defense team is emphasizing his race, Simpson says, "I'm not black; I'm O.J." — it is hands down the most Murphy moment in the whole trailer.

6. When It Becomes Clear The Sideshow Aspect Of The Trial Is Being Embraced

Riots! Tantrums! Lie detector tests! There is no denying the case became a media palooza, and American Crime Story is going to take you back to every crazy moment.

That moment you realize this show is probably going to reopen the Simpson debate all over again. At least it isn't debuting until after the holidays, so you won't get sucked into any heated family debates over pie.