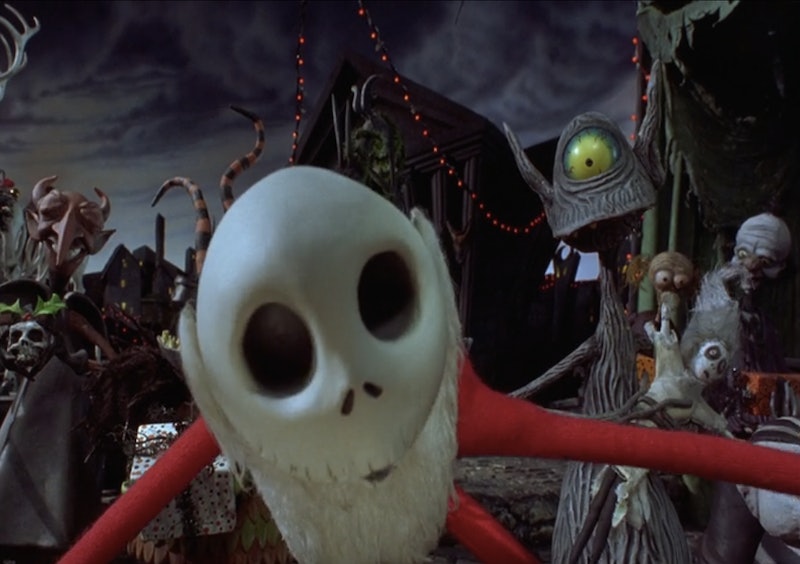 So I'm closing in on 25, and my parents still get me Jack Skellington merchandise every Christmas. Embarrassingly enough, last year my dad hit up five stores to find Pumpkin King slippers that were a paramount part of my list. The truth is, even if you're a retired mallgoth the obsession with Nightmare Before Christmas is strong, and never truly dies. And although hearsay is that it's really a Halloween movie, I still feel as though December is the perfect time to pop in the movie for a rewatch... and side-eye all those weird things you've never noticed before.

Let me let you in on a secret, because we're such good friends: no matter how many times I see this movie, I always notice something new. It's just so wonderfully weird and intricate that details tend to slip through the cracks. This time around, though, I got a little crazy and tried to pluck out glaring lapses in logic and consistency issues. Because... that's a normal thing to do with a movie about a skeleton who hijacks Christmas.

Anyway, join me as I chronologically document all the strange things I wondered about your favorite holiday flick on cultural appropriation, The Nightmare Before Christmas.

1. If Marilyn Manson Collaborated With Pier One Imports, It'd Look Like This

It fits right into my apartment's decor.

2. Oscar The Grouch Is Looking Worse For Wear These Days

3. I Was 75 Percent Convinced These Skeletons Were Satanists, But No

I still don't know what's on their heads, tho.

4. So Sally's Participation In This Is That She... Combs Her Hair?

Also, what's so spooky about the wind?

5. The Awkward Moment When You Can See The Bats' Strings

6. What The Hell Is On The Left Witch's Face?

7. Sally's Life Situation Is So Bad She Routinely Has To Resort To Drugging Her Creator-Dad

Just let that sink in.

8. Jack Has The Ability To Summon Ghosts From Pumpkins, Apparently

Being the King of Halloweentown has some perks.

Wow, he has a LOT of things to highlight in his resume.

"Dad, plzzzzz, I was just combing my hair."

I know you have to suspend disbelief with a film like this, but here's the thing that strikes me. Each holiday has it's own tree realm, yes? And within each holiday realm, their "job" so to speak, is to bring the holiday to our world.

Now, this makes sense with Christmas and Santa and even something like Easter. But how... exactly is Jack and company bringing Halloween to us? They're not doling out candy. They're not sauntering down to Earth, as far as I can tell. All they're doing is singing. So what exactly is their purpose?

Suddenly it makes sense that this one is having an existential crisis.

Whoa, pump the breaks, how does Jack know what mistletoe is? He's never been here before, and clearly Halloweentown's main exports are deadly nightshade and hen bane.

15. How Buried Are Those Houses In The Background?

Or is this just a wonky attempt at perspective?

16. Santa Likes To Throw Open His Door And Laugh Wildly.

18. How The Hell Did Jack Hijack That Yuletide Whimsy-mobile?

Did he murder The Grinch?

20. And I Ask You, Where Is Jack Getting These Books?

I'm pretty sure he couldn't casually walk into the Christmastown library without a scene... or a library card.

22. When Your Dad Says He Won't Drive You To Hot Topic

Ok, but seriously, this scene gets more and more disturbing as I get older.

24. TBH, It's Kind Of Jack's Fault For Not Being Specific

I'm not saying that Lock, Shock, and Barrel aren't in the wrong for picking up the Easter Bunny, I'm just saying if there's like eight doors you should be specifying which one to go through off the bat.

25. Apparently Sawing And Smacking Something With A Chain Is How You Make Toys

This is why no one is making Christmas correctly.

27. Apparently The Trick-Or-Treaters Didn't Try To Kidnap Santa Again Until The Literal Night Before Christmas

See, now, that's totally on them.

28. Also Jack Decides To Give Santa A "Vacation" After All His Other Work For The Year Is Done

And then he steals his hat.

That's the only explanation for all this blacklight.

As a Baby Mary Grace I thought it was a doll, but I got one of my own when I was 15 and it's listed as "Scary Teddy."

Incidentally I laugh super hard at this part of the montage, which I think must make me a horrible human being.

She is a delight.

33. "There's Still No Sign Of Santa Claus. Although The Impostor Has Been Shot Down, It Looks Like Christmas Will Have To Be Canceled This Year."

34. Side Note, Jack's Already Dead, So Why Is Everyone Worried He'll Be, As Oogie Puts It Later, Double Dead?

I guess if he exploded into a million pieces than like, yeah, it'd be hard to put him back together. Sally gets around it, though, I'm just saying.

35. What's Happening Here, Is He Going To Eat Them?

Snake and spider stew with a Sandy Claws garnish?

36. OK, There Is NO Way That Santa And Sally Would've Been Rescued Within The .2 Seconds Before Jack Shows Up

37. Um, Any Reason Santa Didn't Use This Move Earlier?

I know he wasn't tied up his entire visit because Jack and him compared hands.

Clearly this is the point of the film where Danny Elfman stopped trying.

41. I Guess This Is Romantic, But I'm Frightened By The Logistics Of This Kiss

How does it work without lips...?

Yeah, I guess it doesn't make sense to apply logic to something as wonderfully weird as Nightmare. Either way, I encourage you all to Netflix it up and muse to yourself, "What's this, what's this?"