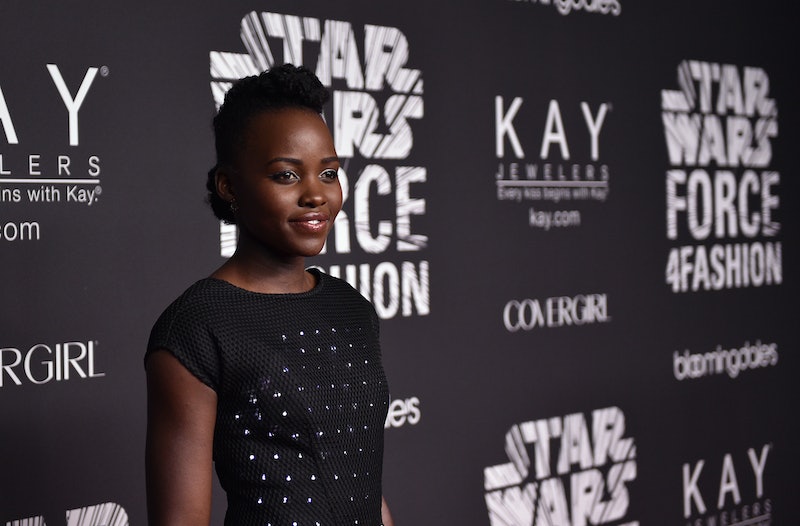 I think we can all safely agree that Lupita Nyong'o slayed the Star Wars Force 4 Fashion red carpet. That said, there's more to Nyong'o's ensemble than meets the eye — her dress, which was covered in galaxy-esque LED lights, was designed as a collaboration between ZAC Zac Posen and Google Made with Code, a nonprofit geared to inspire more young girls to pursue a career in computer science (and indeed all STEM — science, technology, engineering, and math — fields in general). The LEDs were actually coded by young girls around the country, effectively upping the cool factor from very, very cool to basically infinity and beyond. Oh, and here's the kicker — you can even design your own version of Ms. Nyong'o's LED-lit Posen dress on their site, if you're so inclined (and, LBR, who isn't?).

As per usual, Ms. Nyong'o styled her already-perfect dress to perfection — she paired the star-studded frock with futuristic black and silver point-toe pumps, as well as some truly epic graphic silver winged eyeliner. She's always been something of an expert at coordinating her eye makeup with her sartorial choices, and this might just be one of her most on-point eyeliner ever — let's take a look!

Absolutely, unimpeachably killer — and it gets even better when you see how nicely her makeup complements the ZAC Zac Posen x Made with Code dress.

What do you think? Could LED lights be the final frontier in space-themed fashion? The dress was perfectly on theme for the Force 4 Fashion launch, which she attended alongside co-stars John Boyega and Daisy Ridley (who were similarly well-dressed). The launch party celebrated the unveiling of designs by 11 top designers, among them Diane von Furstenberg, Cynthia Rowley, and Opening Ceremony, who all designed looks inspired by Star Wars: The Force Awakens. Starting today, these designs will be displayed in Bloomingdales windows at the flagship store in New York City, and they will eventually be auctioned off to benefit the Child Mind Institute.