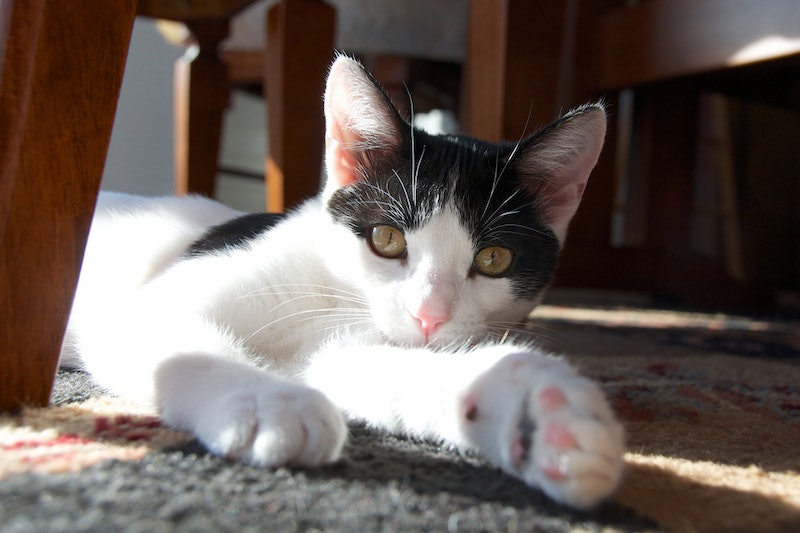 When it suddenly became apparent that cats are terrified of cucumbers, this random tidbit of knowledge kind of blew the Internet's collective mind. But hey, guess what? That's not the only weird cat fact you probably didn't know. Cats are strange and mysterious creatures, and it turns out there's much to learn about them — even if you already own several and are therefore convinced you know everything anyone could ever possibly want to know about them.

Cats have been around for so long that we don't totally know when or where they were first domesticated. It's thought that domestication may have first occurred in ancient Egypt around 4,000 years ago; however, other evidence suggests that it may have happened 8,000 years ago in Cyprus, or even up to 12,000 years ago in the Middle East. Given the demeanor of most cats, I'm pretty sure they'd all say, “Silly human. We domesticated you, not the other way around” — but that's just supposition on my part. (What can I say? I have a weird soft spot for anthropomorphized animals.)

We know they don't like being startled; we know they dream; and we think we know what they dream about — so just for good measure, here are 12 more weird things we know about cats. Because admit it: You're dying to know what the word for a group of cats is, right?

1. They Sweat Through Their Paws

Because they're covered in fur, cats have comparatively few sweat glands throughout their bodies. Most of them are on the pads of their paws—which is why you'll sometimes see little wet paw prints when your fuzzy buddy walks on tile or linoleum during the summer months: Your cat is sweating through its paws. They also cool themselves via panting and licking their fur.

Kind of in the way that ogres are like onions: They share a common feature. For cats, the umbrella thing comes into play when they're falling — they tuck themselves into an umbrella shape, which enables them to always land on their feet. It's called the cat righting reflex.

3. They Can Drink Seawater

Although it's rule number one if a human is stranded on a deserted island never, ever to drink seawater, cats actually don't have that problem. Their kidneys are so efficient that they can filter out the salt, allowing them to hydrate even if all they have to drink is the great, wide ocean.

4. They Know How To Deal With Hairballs All On Their Own

No need for you to give them any fancy anti-hairball treats — as long as your feline pal is an outdoor cat, that is. How do they do it? Cats eat grass. Since they lack the necessary enzyme to digest the grass, they'll often vomit after they eat it — but you know what that vomiting does? It clears out anything indigestible that might be hanging out in their digestive track, including hairballs. Cats really are enormously self-sufficient.

5. Cats Don't Have a Sweet Tooth

Thanks to a genetic defect, cats can't actually taste anything sweet. Sorry, Fluffy.

6. A Group Of Cats Is Called a Clowder

Sounds like of like a cross between a clown and a bowl of chowder to me, but hey, whatever floats your boat, cats. According to Merriam Webster, "clowder" is a possible variant of the word “clutter.”

7. They Spend as Much as Half Their Lives Cleaning Themselves

True story. They'll also occasionally groom their humans by licking them — it's a sign of affection.

8. Purring Serves More Than One Purpose

It's not just a thing that cats do when they're happy. They can also do it when they're stressed — and it's possible that it might be a form of self-healing, too (which you may already know if you've read Oryx and Crake, but I still think it's cool). Domestic cats purr at a frequency between 25 and 150 Hertz — which, according to Live Science is also “the frequency at which muscles and bones best grow and repair themselves.” As a result, we suspect that cats' purring may have evolved as a survival tactic over time.

Even if your cat is healthy, “unusual external events” make it just as likely to refuse food, throw up a lot, and deposit its waste somewhere other than its litter box, according to researchers from Ohio State University. This might explain why one of my cats spent four days vomiting recently, even though she's doesn't usually have a delicate stomach — my partner and I had company staying with us. Mystery solved.

10. Nose Prints Are The Equivalent Of Fingerprints for a Cat

Every cat's nose print is as unique as a human's fingerprints. Just, y'know, in case your cat is ever caught trying to steal the tuna sandwich you were planning to eat for lunch and ends up booked for burglary.

11. They Can Be Right-Pawed or Left-Pawed

12. Cats Don't Think You're Capable Of Taking Care Of Yourself

It's why they bring you mice and other dead animals (or in the case of my two very indoor cats, toys) — they think you suck at hunting, so they're bringing you dinner. How sweet.

More like this
The 8 Best Collars For Cats Who Hate Collars, According To A Vet
By Lauren Moison
The 4 Best Food Bowls For Dogs With No Teeth, According To Experts
By Maria Cassano
Dog Trainers Swear By These 15 Little-Known Tips For Making Your Pooch Behave Better
By Allison Bolt
This Wi-Fi-Enabled Pet Feeder & Camera Gave Me Peace Of Mind On An Overnight Trip
By Danielle Calma
Get Even More From Bustle — Sign Up For The Newsletter