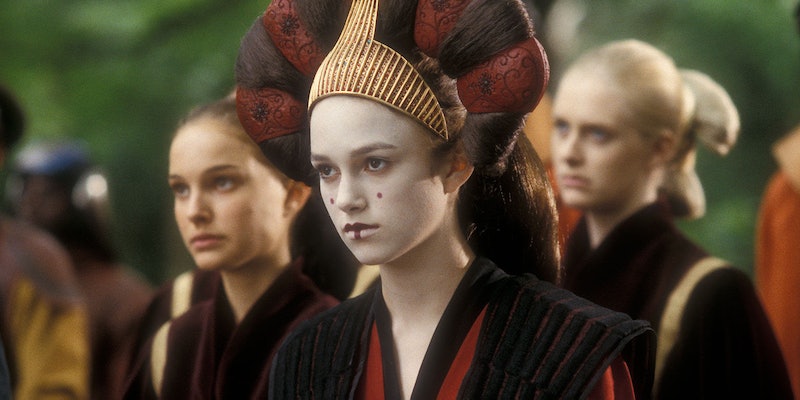 The Star Wars franchise has made superstars out of the actors that have appeared in all of the movies. In the original trilogy, Mark Hamill, Carrie Fisher, and Harrison Ford were mostly unknowns and now they are household names and pop culture icons. Hamill has become a fanboy icon, Fisher is an accomplished writer and actress, and Ford is freakin' Indiana Jones, for crying out loud. The same goes for the prequel stars — sure, the movies weren't the best in the franchise, but they broadened the reach of Natalie Portman and Ewan McGregor. It also introduced viewers to Hayden Christensen, and granted everyone's wishes of turning Samuel L. Jackson into a Jedi Knight with a purple lightsaber. There have been many big marquee names in all of the Star Wars movies, but there have also been many famous Star Wars actors you never knew were in the series.

If you combine all the ensembles of all six movies — stars and extras — the number is massive. It's probably enough to populate a small country. That said, the revolving door of cast members in any Star Wars movie is bound to have an actor or two who may not have been huge then, but are now. From The Phantom Menace to Return of the Jedi, here are some of the now-recognizable faces you might've not realized were in the films.

1. Keira Knightley As Sabe In The Phantom Menace

You may have missed her because she was a decoy posing as Queen Amidala, who was played by Natalie Portman, who was posing as her handmaiden Padme in the scene above. Confusing. right? Anyways, Knightley and Portman look very much alike in that fancy makeup.

2. Dominic West As A Palace Guard In The Phantom Menace

Before he was having an Affair or getting into trouble on The Wire, West had a small role as a palace guard in Episode 1 of the franchise. It was definitely one of those blink-and-you'll-miss-it moments.

3. Deep Roy In Various Roles In The Empire Strikes Back And The Return of the Jedi

The actor, known for playing every single Oompa Loompa in Tim Burton's Charlie and the Chocolate Factory, had multiple roles in the first Star Wars trilogy, including Yoda. Who knew?

4. Sofia Coppola As Sache In The Phantom Menace

You probably don't remember Sofia Coppola as one of the many handmaidens in Episode 1, because it was only for a split second and you can barely see her face.

5. Keisha Castle-Hughes As Queen Apailana In Revenge Of The Sith

The Whale Rider and Game of Thrones actress appeared very briefly, wearing fancy royal attire in the final installment of the prequels.

6. Julian Glover As General Maximilian Veers In The Empire Strikes Back

He may not be a huge name, but Julian Glover is in the acting class of people like Patrick Stewart and Ian McKellan. In addition to working for Darth Vader in The Empire Strikes Back, he was also a bad guy in Indiana Jones and the Last Crusade. More recently has been seen as the bearded Grand Maester Pycelle on Game of Thrones.

7. John Ratzenberger As Major Derlin In The Empire Strikes Back

You heard that right. The guy from Cheers and the voice of Hamm in Toy Story fought for the Rebel Alliance.

8. Greg Proops As Fode In The Phantom Menace

Comedy nerds might enjoy the fact that "the smartest man in the world" voiced one half of the two-headed creature that provided commentary for the pod races in Episode 1.

9. Joel Edgerton As Young Uncle Owen In Revenge of the Sith

At the very end of Episode III, baby Luke gets handed off to Aunt Beru and Uncle Owen, and guess who plays a young Owen? The actor that creeped us out in The Gift, Joel Edgerton.

10. Rose Byrne As Dorme In Attack Of The Clones

Rounding out Queen Amidala's all-star squad of handmaidens was Rose Byrne. Before she was planning weddings in Bridesmaids, she was Amidala's lady in waiting.

11. E.T. As Himself In The Phantom Menace

This is more of an Easter Egg than a cameo from an actor. If you were paying attention during the Galactic Senate scene in Episode 1, you probably noticed E.T. and his crew phoning home.

I wonder what crop of cameos and actors the new trilogy will bring.