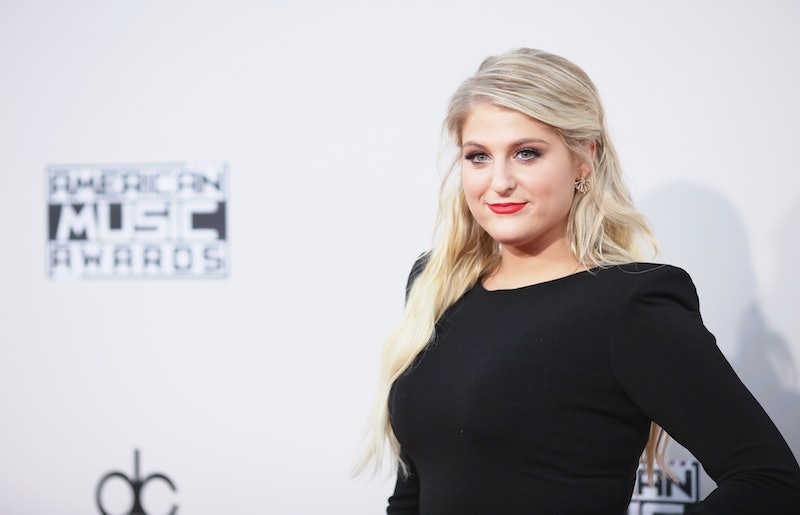 It's hard to imagine a world where the phrase "all about that bass" wasn't a commonly used Instagram hashtag. We can thank newly minted pop star Meghan Trainor and her song "All About That Bass" for that line. It wasn't Trainor's only success of the calendar year: her singles "Lips Are Movin'," and "Dear Future Husband" got considerable airtime (and also induced plenty of toe-tapping) while her collaborations with artists like Charlie Puth and John Legend proved she was was a very worthy duet partner. So, with Grammy nominations approaching fast on Monday, Dec. 7, it's worth wondering: could Trainor be nominated for a Grammy this year?

Well, here's what we know.

Trainor may be only 21, but she's already a Grammy-nominated artist. In fact, she was nominated not once, but twice for "All About That Bass," which received nods for Record Of The Year as well as Song Of The Year. Trainor's song was released on June 30, 2014, which made it eligible for the 2015 Grammys. This year, in order to be eligible for the 2016 Grammys, albums or recordings must have come out between Oct. 1, 2014 and Sept. 30, 2015.

Fortunately, Trainor did release a full album this year. Though Trainor has three independent labels under her belt, her first album with a major record label was released within the eligibility dates. Trainor's record Title was released by Epic Records on Jan. 9, 2015, which means that she has met all of the requirements to be nominated for another Grammy this year.

Trainor fans, your girl still has a shot at another Grammy nod — but just in case she doesn't make the cut this year, don't worry. This young singer has already made a major mark on the pop scene with her first album, and given her current track record, her next one should be just as obsess-worthy.