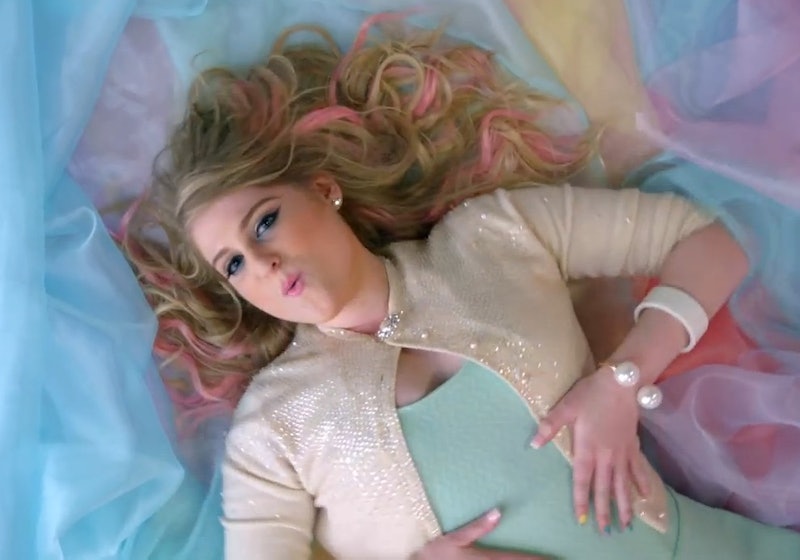 I'm really loving the hit songs that are coming out these days that are focused on celebrating women with full figures. I know songs like "All About That Bass" aren't the first of their kind, but they are the first of their kind that have become such huge, mainstream hits. America has still got such a ways to go before it finally acknowledges that the average woman within its borders is not as skinny as the models on the billboards, but the fact that songs like "All About That Bass" can support full figures and become hit songs makes me happy. However, what doesn't make me happy is the fact that "All About That Bass" couldn't do that without a little skinny shaming. And it's not the first one to do that, either.

Another huge hit of the summer that was dedicated to celebrating girls with curves as "Anaconda", Nicki Minaj's amazing update to Sir Mix-a-Lot's "Baby Got Back". However, much like "All About That Bass", Minaj devoted a throwaway line to body shaming. Well, Minaj devoted more than a throwaway line. One entire verse from the song was devoted to saying, "Fuck them skinny bitches," over and over again. Like I said, I'm really loving all the popular songs devoted to giving the spotlight to girls of every body type, but wouldn't it be a more positive message to do that without tearing down girls of other body types?

I understand the allure of skinny shaming when it comes to songs like this. The word "fat" is thrown around to insult women as often as the word "ugly", because women are still overwhelmingly judged by their looks regardless of what they are doing or saying to make someone else so angry to begin with. I can understand why it might be nice to have to be able to throw an insult back in their faces, since our society places women of a certain body type on a pedestal above women with fuller figures. I'm not dismissing that feeling at all.

However, Minaj, for one, has always made it a point to preach to her fans that women should be building each other up instead of tearing each other down so it was incredibly disappointing for her to sell a competitive mentality to her fans in "Anaconda". In Trainor's defense, at least "All About That Bass" went on to say no I'm just playing although it sounded disingenuous in the song. It would have been very simple for both "Anaconda" and "All About That Bass" to avoid skinny shaming in their songs, even without doing a complete rewrite of their lyrics.

Don't use the phrase "skinny bitches".

This is the most obvious thing that I can think of. Both "Anaconda" and "All About That Bass" reference skinny bitches and I don't think I even need to talk about what a disappointing phrase that is. Remove it from both songs and they're ten times more inclusive already.

Focus on the positives instead of the negatives.

"All About That Bass" and "Anaconda" were both already about having a full figure and the men that love those figures, so why even bother to bring thinner girls into the equation at all? It would have been a great improvement for the songs to stick to the subject matter they were trying to get across rather than comparing full figured women to "skinny bitches".

Praise women of all body types.

If "All About That Bass" and "Anaconda" wouldn't be the same without discussing both full and thin figures, then why not remain positive about both? Instead of telling skinny bitches off, why not say that the song isn't for them but they can still listen anyway? Or that no matter what your figure is like, you're still beautiful? We need more body positive anthems that are actually body positive, please and thanks.

More like this
Spice Girls’ Net Worth: The Richest Member Is Wealthier Than The Rest Combined
By Hugh McIntyre
Doja Cat Wore Surrealist-Inspired Schiaparelli To The BBMAs
By Dominique Norman
Cardi B Explains To David Letterman Why She Uses Her Star Power For Politics
By Jake Viswanath
The Very Best Quotes From Dr. Taylor Swift’s NYU Graduation Speech
By Grace Wehniainen
Get Even More From Bustle — Sign Up For The Newsletter