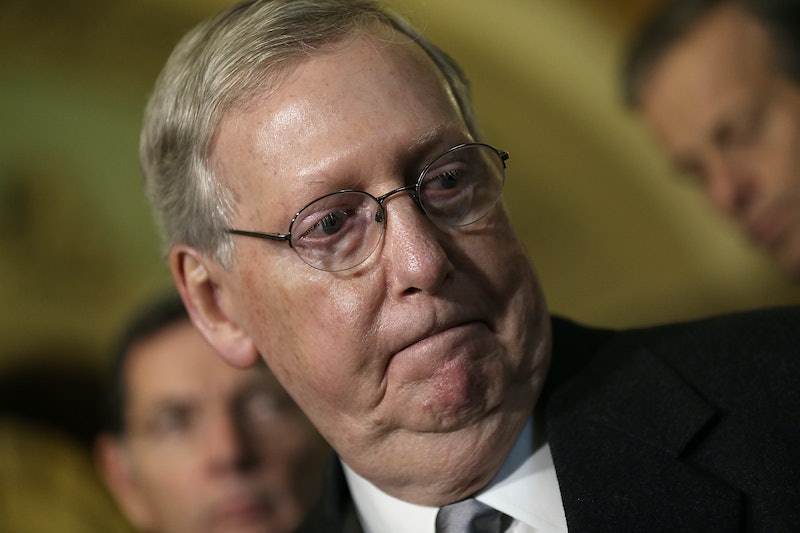 The Senate has passed a bill on a 52-47 vote that would repeal the central components of Obamacare and defund Planned Parenthood. This is the first time the Senate has passed an Obamacare repeal bill, and it will land on President Obama’s desk pending its expected approval in the House of Representatives. But let’s not get ahead of ourselves here. Obama will veto this legislation, and despite some claims to the contrary, the Senate’s action on Thursday means precisely diddly-squat for the ultimate fate of the Affordable Care Act.

First, let’s look at the bill itself. It would completely gut Obamacare by scrapping many of its foundational elements, including federal exchanges, health care subsidies to low-income Americans, individual mandates, employer mandates, and the expansion of Medicaid. It’s pretty all-encompassing, and goes even further than a similar repeal bill passed by the House in October.

But the White House has already pledged to veto it, and while passage of this bill is a symbolic victory for Republicans, it does absolutely nothing to change the fundamentals of Obamacare repeal. When it comes to getting rid of the Affordable Care Act, the bottom line is, and always has been, this: Republicans need to A) win the White House, and B) retain control of Congress in order to get rid of the law. Period. Until that happens, the ACA isn’t going anywhere, and nothing Congress does before then will change this fundamental calculus.

Yet some have argued that Thursday’s vote in the Senate will actually improve the GOP’s chances of ultimately getting rid of the bill. According to Politico, the Senate GOP is “carefully laying the groundwork for dismantling the law” if they win the presidency next year. This argument hinges on the granular inner-workings of Senate procedure, and while it’s not a good argument, it’s at least worth debunking. Bear with me here.

Nowadays, most controversial bills in the Senate get filibustered. Republicans were able to pass this bill only because they used budget reconciliation, a Senate procedure that allows senators to make a bill immune to a filibuster if it falls within certain requirements. (The requirements are complicated, but in essence, the bill must pertain to the federal budget.) Democrats used budget reconciliation to pass parts of the Affordable Care Act back in 2010 and eliminate the threat of a GOP filibuster; on Thursday, they got a taste of their own medicine.

But wait — who decides whether a bill qualifies for budget reconciliation? That would be the Senate parliamentarian, a government official who basically never gets discussed except when budget reconciliation comes up. The parliamentarian is appointed by the majority party, and it’s her job to review a bill and decide whether it qualifies for reconciliation. If she says yes, as she did this time, the bill is immune from a filibuster, and can thus pass with fewer than 60 votes.

The current parliamentarian is Elizabeth MacDonough. Politico argues that because she gave this bill the go-ahead, it’ll be easier for Senate Republicans to convince her to do so again in 2017 if there’s a Republican in the White House. But that’s nonsensical: Unless Republicans make an idiotic strategic mistake and replace MacDonough with someone else, she'll be the parliamentarian next year, and she’s already decided in the GOP’s favor. The human being who would need to be convinced in 2017 has already been convinced; presumably, she would rule the same way next year as she was now.

Really, this minutiae is just a distraction from the fundamentals of the issue, which have never changed. If Republicans capture the White House and keep their hold of Congress, they will be able to repeal Obamacare. If they don’t, they won’t. Make no mistake — Thursday’s vote was a show vote, intended to placate the Republican base, and nothing more.