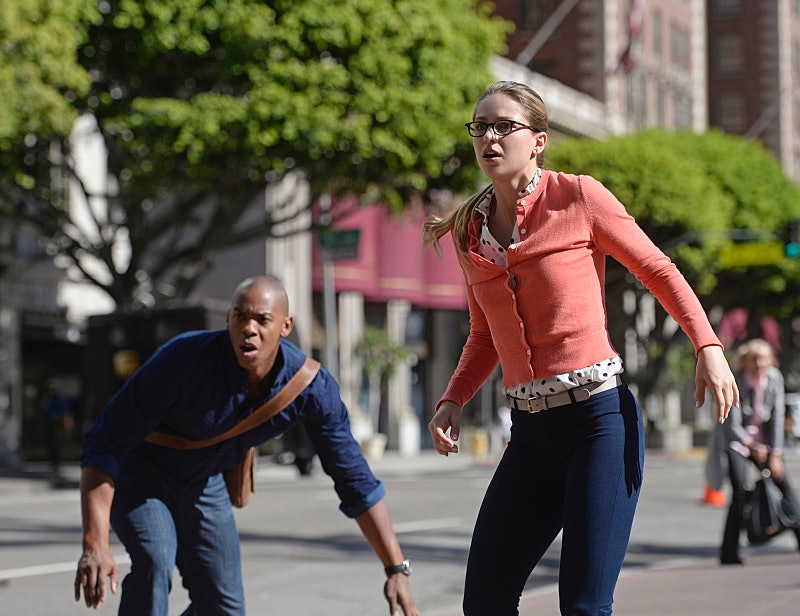 Normally, you wouldn't think something like a little flesh wound would be much cause for concern, but when it happens to someone who's supposed to be indestructible, everyone is going to sit up and take notice. So you can imagine Kara's shock when she cut her hand on a piece of broken glass during last week's episode and started bleeding for the very first time. (At least without the wound automatically healing itself.) Clearly, Kara has lost her healing powers on Supergirl , thereby making her vulnerable in a way that she's never been before. But it's not just the "what" that concerns me — though having human vulnerabilities definitely puts her in serious danger. However, I'm even more curious about how this happened to begin with. How did Kara lose her Supergirl abilities?

We know that she just recently battled against the military cyborg Red Tornado, so odds are this confrontation may have had something to do with this temporary mortality experience. But when it comes to any superhero series, it's important to never just automatically assume anything. There are a lot of different factors and possibilities that may have come into play to make Kara so unusually weak. So as a way to help narrow down our search, let's take a look at some of the most likely scenarios that could explain this surprising plot development.

It's A Physical Issue

During her showdown with the Red Tornado, Kara tapped into pretty much all of the rage she's been holding back on for so long. It's quite possible that all that used energy simply maxed her capabilities out for the time being (like blowing a fuse, if you will) and she just needs a day or two in order to recharge.

It's A Mental Issue

This can be a little bit trickier to deal with. Perhaps this sudden power blockage is rooted in Kara's emotional state. Clearly, she's dealing with a wide range of complex feelings (anger, loneliness, resentment), especially in regards to her identity. In fact, she's always wanted to be a normal human being. So maybe, when all of those emotions came bubbling to the surface, it acted as a road block to her powers. Perhaps by rejecting (or resenting) who she is, she lost her super capabilities, which means she has to embrace who she is before this situation can ever hope to rectify itself.

For all we know, this problem has nothing to do with her encounter with Red Tornado. There could be another danger out there that's only just now coming into play. We haven't heard from Kara's Aunt Astra for a while. Maybe she somehow found a way to use kryptonite to her advantage so that it won't necessarily cause pain to Kryptonians but make them lose their powers because #science? Either way, we know that kryptonite is a definite weakness for both Kara and Clark, so it would make sense if this ends up factoring into the equation in some way.

We still don't know what this guy's deal is, but given the red eyes he tends to glow at us every now and then, I'd say he could be up to no good and is weakening Kara as a way to distract her from seeing his bigger plan.

It's Just A Test

Then again, maybe this is just another superhero test courtesy of the D.E.O. that's meant to help Kara in her training process. Hey, when it comes to a show like this, not even the sky is the limit.