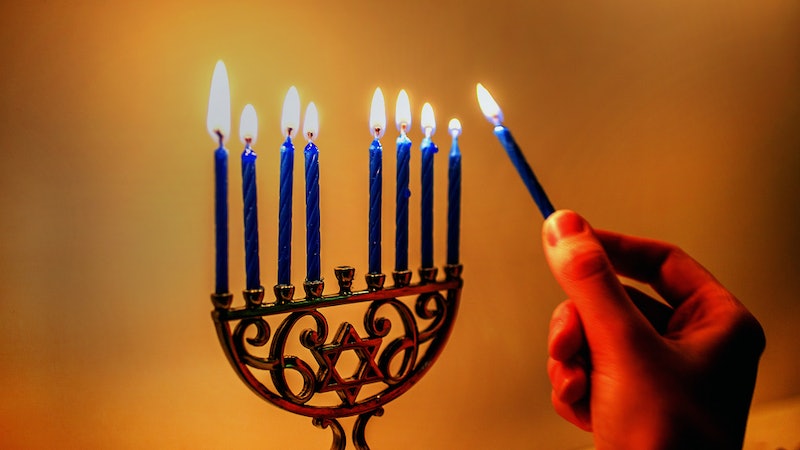 Most people know that I'm kind of a Scrooge when it comes to the holidays. I don't want to listen to Christmas music, and — if it doesn't include Charlie Brown, the Grinch, Rankin-Bass, or a leg lamp — I probably don't want to watch that heartwarming holiday film that's on TV. And if it happens to involve an angel named Clarence, rest assured: I will make fun of it every chance I get, bad Jimmy Stewart impression and all.

Don't worry, nothing catastrophic happened to make me this way. My dad didn't get stuck in the chimney and die in a Santa suit on Christmas morning. I actually enjoy the holidays — shopping, wrapping presents, eating good food, seeing family and friends — just in small doses. I'm talking can-we-exchange-presents-by-mail kind of small.

See, I think food, friends, and family are all great things, to the extent that I kind of bristle at the idea of concentrating them all into one or two weeks at the end of the year. No one is their best at the holidays, because everyone is stressed out from the shopping and decorating and traffic, not to mention the struggle of coordinating your holiday parties. I think my blood pressure is going up just thinking about it.

Because no one can really be their best person during the season of giving, everyone has a bad holiday story to share. Whether your cat knocked over the menorah or your drunk uncle peed on the Christmas presents, the awful holidays recounted in these stories will make you feel better about your festive disasters. Here are the 12 worst holidays in books.

1. In God We Trust, All Others Pay Cash by Jean Shepherd

"You'll shoot your eye out." That's all Ralphie hears whenever he tells an adult what he wants for Christmas: a Red Ryder BB gun. His relentless pursuit of this one gift leads to a terrible, but still heartwarming, Christmas his family won't soon forget.

Kenya's activist parents celebrate Kwanzaa, unlike the rest of their Christmas-loving peers. When she decides to stage a Kwanzaa celebration at her school, it turns out worse than she expected.

3. Harry Potter and the Order of the Phoenix by J.K. Rowling

With Arthur Weasley receiving treatment at St. Mungo's for both a basilisk bite and his self-stitching incident, the Golden Trio spend Christmas in the hospital. While there, they learn how Neville Longbottom spends his holidays.

4. The Santaland Diaries by David Sedaris

If you've ever wondered what it's like to be helper elf to a department store Santa, take it from David Sedaris: it's worse than you could possibly imagine.

Emma has tried really hard to match up her friends, Harriet and Mr. Elton. She thinks she's been successful, until Christmas rolls around and Elton proposes to her instead of Harriet.

6. Anne Frank: The Diary of a Young Girl by Anne Frank

In 1942, Christmas and Hanukkah fall very close together, so the Annex holds two small celebrations. It's an eye-opening look at the holidays under the grimmest of circumstances.

7. Harry Potter and the Deathly Hallows by J.K. Rowling

Most of the Christmases in Rowling's bestselling series were cheery, what with sweaters from Molly Weasley and magical decorations in the Great Hall. But Christmas in Harry Potter and the Deathly Hallows was a grim affair. Ron was gone, and Harry and Hermione got attacked by Nagini in Godric's Hollow.

8. I Was Told There’d Be Cake by Sloane Crosley

Sloane Crosley grew up in a Jewish household that had a Christmas tree, not a Hanukkah bush, because "[w]hy borrow a holiday when you can steal it?" I Was Told There'd Be Cake includes her essay, "Christmas in July," which — if you're feeling like a lax Jew this holiday season — will probably make you feel all better.

The titular Little Match Girl ventures out on a Christmas Eve night to sell matches to support her family. What follows is a heartwarming tale of the worst Christmas ever, bar none.

10. I’m Dreaming of a Black Christmas by Lewis Black

What's it like to be a single, crabby Jewish guy at Christmas? In I'm Dreaming of a Black Christmas, comic Lewis Black will tell you. As he observes, "[Jews] don't really even [compete with Christmas], as Chanukah is proof that we just gave up."

12. Kitchens of the Great Midwest by J. Ryan Stradal

Kitchens of the Great Midwest is one of 2015's most-under-appreciated works of fiction. Prepare your tissues, folks: nothing sucks worse than being orphaned on Christmas Eve.

More like this
'Mayfair Witches' Already Changed 2 Major Characters From The Books
By Grace Wehniainen
8 Charities To Donate To During Black History Month
By Alexis Morillo
90 Epic Truth Or Drink Questions To Play 'Say It Or Shot It' With
By Bustle UK
8 Things You Can Do To Appreciate Lunar New Year
By Elizabeth Tsung
Get Even More From Bustle — Sign Up For The Newsletter
From hair trends to relationship advice, our daily newsletter has everything you need to sound like a person who’s on TikTok, even if you aren’t.