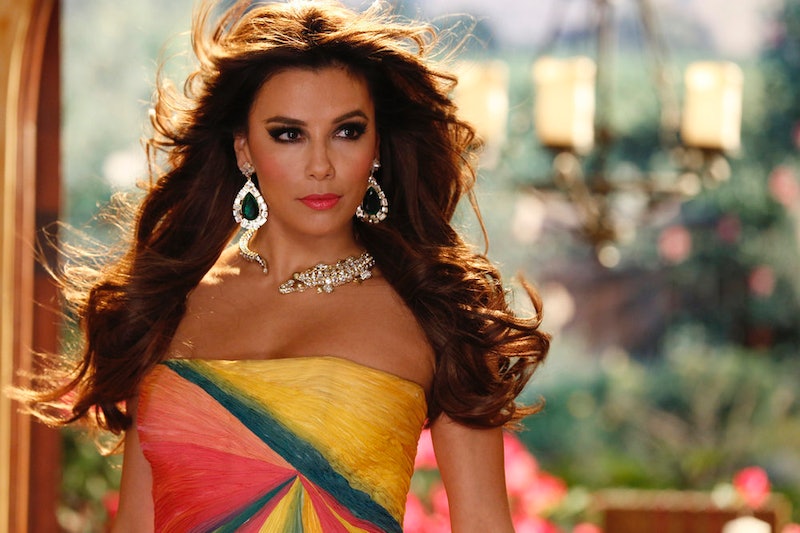 Eva Longoria is back on TV in her new NBC comedy Telenovela , where she plays Ana Sofia Calderon — the star of a Spanish-speaking soap opera. While Ana Sofia has got the looks and attitude to be the show's leading lady, the problem is she can't actually speak Spanish, so does that mean that Eva Longoria can't speak Spanish either? The workplace comedy, which the former Desperate Housewives star is an executive producer on, isn't close to biographical for Longoria, but the actress can definitely relate to the struggle Ana Sofia faces linguistically.

Longoria is from Corpus Christi, Texas and is a ninth generation American of Mexican descent. She told Los Angeles magazine that her parents spoke Spanish to each other, but that they didn't speak to her in Spanish because students weren't allowed to speak the language at school. As Longoria eloquently stated in that interview:

"[My family] never crossed the border; the border crossed us. We’ve owned the same ranch land since 1603. That’s a big faux pas to think 'Latino' is synonymous with 'immigrant' or with 'not from here.' I’m not an immigrant. ... But America is the only country that promotes monolingualism. Here it’s English, English, English. Every other country makes their children learn a second language very early on. So as my political and social activism grew, I was like, 'I really need to learn Spanish.' So I did."

In a 2011 interview on Piers Morgan Live, Longoria told Morgan that she had only learned to speak Spanish about two years prior (she actually had learned French before Spanish). At that time, she was also getting her masters degree in Chicano studies and political science. She defined Chicano studies to Morgan as "the study mostly of the Mexican-American movement that has happened in the United States, and the history of Mexican-Americans. Actually of all Latinos, but specifically Chicano is usually referencing someone of Mexican-American descent."

The intelligent actress has long been grasping with the idea of what it means to be Mexican-American, especially when it came to the fact that she didn't speak the official language of Mexico. For O, The Oprah Magazine in 2010, Longoria described her struggle associating with a specific nationality when she went on a trip to Mexico:

"I'm proud to have a Mexican heritage, and I'd always deeply rooted my identity in it. Then, about ten years ago, I went to Mexico ... when I got there, I was perceived as American because I didn't speak Spanish and at the time knew very little about the history of Mexico. Yet in America, I was considered Mexican because of how I looked and my last name. It was confusing. I thought, 'If I'm not Mexican, and I'm not American, who am I?'"

While Telenovela is most definitely a comedy and doesn't promise to dive as deep as Longoria has in her personal life about the identity of Latino-Americans, the character Ana Sofia may (if you pardon the pun) "speak" to people like Longoria. "It's very difficult to live in our community if you don't speak Spanish — everyone will judge you," Longoria said in an interview with EFE in Miami. In the same interview, her cast mate Jencarlos Canela agreed that "a lot of Latinos don't speak Spanish perfectly and feel rejected in our community ... these people ought to be represented."

The half-hour show, highlighting the behind-the-scenes of the workings of the Spanish soap, is getting a two-episode preview after The Voice on Monday, Dec. 7 at 10 pm, before it premieres at its regular time on Monday, Jan. 4 at 8:30 pm. And, beyond the starring in a soap opera and all the physical comedy, Longoria is creating an important character on Telenovela that many people in America may be able to relate to and who haven't had a voice on American television until now.