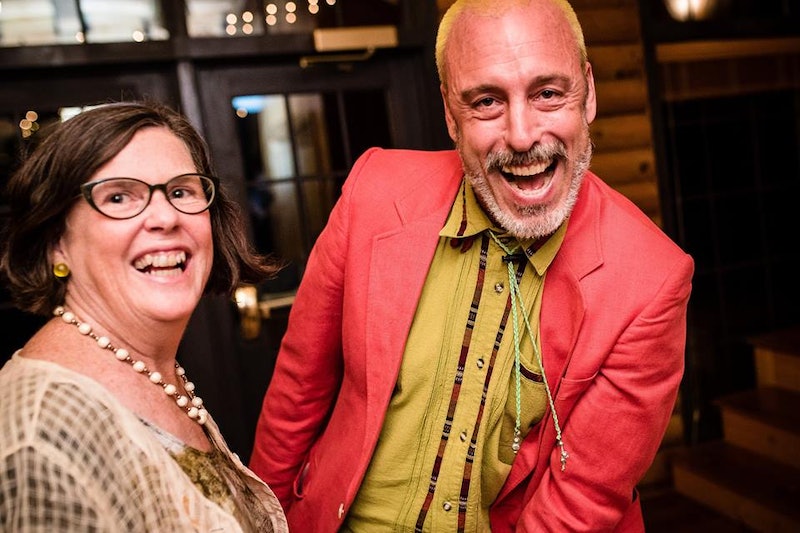 When I decided I wanted to lose my virginity, I told my dad before I even told my high school boyfriend. I was 15, flying on first love, and I knew that I was ready. And because I was raised by feminist, sex-positive parents who’d always been open about sex, I also knew that I needed to protect myself against pregnancy and get on the Pill before we did it — and that my dad would help make that happen. I remember being a little bit nervous about telling my dad but also really excited because this was such a huge, awesome thing that I was about to do! I wanted to share it with him! And you know what he said? He told me he wished I was a bit older but that he loved my boyfriend, trusted me to make good decisions, and couldn’t think of a better person for me to lose it to.

We have this cultural understanding of Daddy as protector of teenage girl purity — but that’s never what my dad was. Instead, my dad trusted me to make my own decisions about my body, my sexuality, and my relationships. He always supported me and, yes, protected me but didn’t feel the need to protect me from myself. He made sure that I had the tools to protect myself physically and emotionally in relationships and that I knew I could always come to him, for anything.

My dad, Stu McGowan, raised seven teenagers, two of whom (myself included) are his biological kids and the rest of whom needed a family and found ours. In a household that was packed to the rafters with teenage hormones, he and my mom guided us through our first relationships, our first times having sex, our chosen birth control methods. They lived by example, showing all of us what an equal partnership looks like and what it really means to live by your ideals. Our nightly family dinners (6:00, sharp, every evening) were raucous and no topic was off limits — although the boys did have to be reminded sometimes that they couldn’t come to the table in their boxer shorts.

We all know what the protective dad looks like, but I think it’s time to explore a new model, one that believes in and allows for teenagers — girls especially — to have their own agency and, yes, sex lives.

So I called my dad and asked him to tell me about his top lessons that he learned from being a sex-positive, feminist dad. Here’s what he told me.

1. When It Comes To Sex, Trust Your Kid

While he admits that it was hard sometimes, Stu says that the number one thing a sex-positive parent has to do is trust their kid. He says that’s about letting your kid experience sexuality the way they’re going to experience it and making sure you’re available to be there for them if and when they need it. It’s a fine balance between getting out of their way and being available but the key is understanding that your kid is a separate person from you with their own wants and desires.

2. Trust Yourself As A Parent

But trusting your kid also means trusting yourself. Stu says that most of the hard work actually comes before a kid is sexually active.

“Most of your work is done by six, seven, eight years old; whatever the particular age is for your kid,” he told me. “Whatever you lay down at that point is going to be the direction your kid goes. You have to trust that it worked and that’s not an easy thing to do.”

My parents knew that they put good morals into my brothers and I and that they taught us the right lessons. That’s what allowed them to trust us to make the right decisions and, for the most part, we did.

3. Don’t Default To Mom Doing The Housework And Childcare

This one isn’t sex-related but it’s definitely an important feminist lesson I learned from my parents. My dad told me that when he and my mom got married, my mom told him that when it came to housework and childrearing, “It’s not you do 50 percent, I do 50 percent. It’s we both do 100 percent.” And that’s something they both stuck to. They both cleaned; they both watched us; they both cooked until they taught us how to cook. None of us left the house thinking that it was Mom’s job to scrub the toilet or that cooking was something only women did. Gendered tasks around the house just wasn’t how we were raised.

“I’m proud as can be that every single one of my boys knows how to cook,” Stu told me.

4. Don’t Think You Can Get Away With Only One Sex Talk

I don’t remember when I learned about where babies come from because sex wasn’t a taboo topic in our house. There was no one big “talk” but instead it was just something that was part of our lives. My parents answered any questions we had and my dad says that they were conscious of the fact that kids are always listening, so they made sure to put forward a sex-positive message all the time. Obviously the message changed as we got older — being age-appropriate is important too — but it was a conversation that was always happening.

The one talk I remember us having that was super direct and clear, however, was the conversation about consent. He made it very, very clear to his five sons that in addition to it being immoral, there would be serious legal consequences if they ever did. But in general? Sex talks “weren’t that big a deal. It was just what you were used to.”

My parents hammered it into our heads that it's wise to use two forms of protection, because every birth control method can fail. They made sure I was on the Pill and that my brothers knew not to have sex without a condom, even if the girl said she was on the Pill.

My dad told me the story of when one of my brothers — who was 18 at the time — let it slip that he and his long term girlfriend weren’t always great about using condoms. He went to Costco and bought three boxes of 120 condoms each, gave them all to my brother, and told him that he never wanted to hear him use the excuse of not having a condom again. Problem: solved.

6. Don’t Make Comments About How Women Look (Especially In Front Of Your Kids)

My dad remembers carrying me as an infant down the main street of our town. He was young — only 24 when I was born — and a beautiful woman walked by. He looked her up and down and even watched her walk away, only to turn back to my baby googley eyes staring up at him from his arms.

That was the moment, he says, that he realized that a lot of things were going to have to change, particularly when it came to how he interacted with women. And for my entire childhood and teen years, I never heard my dad comment on how other women looked. He knew that his kids — but me especially — would absorb those looks and comments and the messages they conveyed. He didn’t want me, his daughter, to feel like I had to live up to certain beauty standards and he didn’t want his sons to objectify women that way, so he lived by example.

“Body image was wicked important for me, with you,” Stu told me. “I thought, ‘Every action I take regarding other women’s looks or bodies is going to affect the way my daughter thinks about herself.’”

But more than anything else, my dad says that a sex-positive, feminist dad loves his daughter for who she is.

“Whatever you were was right,” he told me. “That was what you were. I had no qualms about telling you that you were an awesome kid, a beautiful girl. I had no problem with that. That’s part of what it means to be a loving dad.”