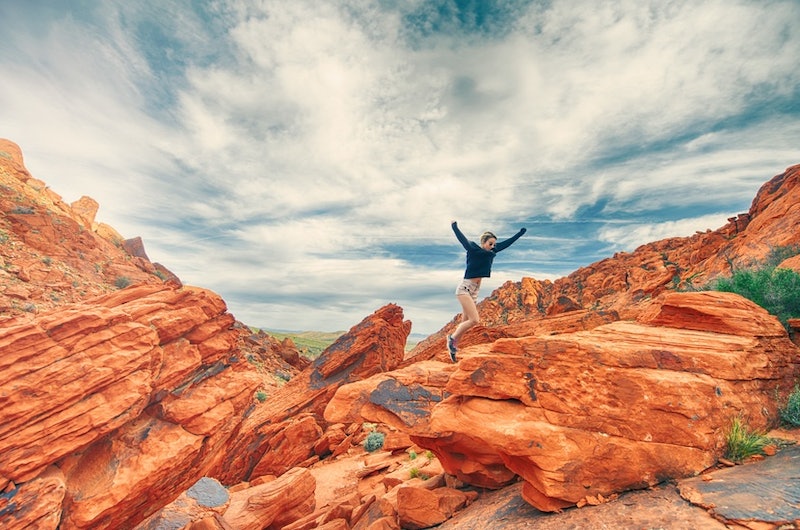 While learning how to say yes more might seem like a no-brainer, we all have moments where the knee-jerk reaction is an automatic no. Sometimes you don't even realize it's happening: No thanks to margaritas on a Friday night, no to going on that road trip on your three day weekend, pass on getting falafels after work, um maybe you'll go on that date next week, and nah to the house party you have to go to solo. Sometimes plans just don't sound appealing, and what can it hurt staying in and watching Netflix, instead? But one thing you might not realize is that these small no's might be getting you comfortable in blocking opportunities and instead keeping you snug in your safe zone.

If it's easy to pass up a friend to spend an hour or two in a corner booth at that barbecue place, it can be just as easy to decide not to go on that awesome camping trip come summer. Or if you might feel intimidated going to a networking event at work, you might crack to that same intimidation when it means taking up a project you might not be 100 percent ready for (but can kick butt in if only you tried.) Saying no is a slippery slope, but going the other way and saying yes can be hard. Not to mention scary. So how do you make yourself agree to more?

Below are seven tips on how to say yes more often — follow them and see how your life begins to change.

1. Realize You Don't Have To Lose What You Already Have

Often times we feel that if we accept one thing, we have to give up another. If you accept more tasks at work, you'll leave the security of your old job behind. What if you can't handle the responsibilities, or what if you drop the ball because you don't have the experience? You could get fired. But saying yes doesn't mean you have to say yes to the full monty; you can agree to a baby step first, and then move further up later. The important thing here is just to try with the yes.

Adrian Savage, author of Slow Leadership: Civilizing The Organization and contributor to LifeHack, says, "What holds most people back is fear of losing what they already have, however imperfect it might be. Just remember that you are in control of the experiment. You can try a little change as easily as a huge one."

Take on some responsibilities instead of all of them; ask to take on one project instead of five. Moderation is totally doable.

2. Admit That No Matter How Scary It Is, There Might Be Something Better Around The Corner

Admit to yourself this one thing: You know that with a refusal, there's no change. That might be comfy, but how much are you cutting yourself short by not letting yourself see what else is out there?

Savage points out, "So many people go through life and work convinced that there is only one path open to them. That makes it true, because they never try anything else. But the world is a huge, glorious experiment, not a set of rules to be followed and boxes to the checked. The closer that you stick to the same script, the less you will discover about what might be even better."

Whether it's agreeing to go on a date, braving a networking event, sending out that scary email, or applying for a job you don't think you'll ever get, taking a risk with a yes opens more doors for you than staying safe with a no.

3. Ask Yourself How You'll Regret It If You Say No

If it's hard for you to take a leap, try to switch the narrative of your excuses. Instead of seeing why you shouldn't accept, imagine the best case scenario and suss out how you'd feel missing out on that. Put a little FOMO into the equation.

According to Ken O'Quinn, leadership writer at career development site Fast Company, "Anticipating that things will not turn out well influences the choices people make, says psychologist Matthew Crawford." So ask yourself, "How will I feel if the editor would print my story and I missed out on that opportunuty?" or "How would I feel looking at my friend's Rome pictures, knowing I'd be eating gelato right there beside her if only I said yes?"

Chances are, worse than if you had said yes and it didn't work out.

Grant Davis, editor for Entrepreneur Magazine, points out, "On the other hand, no is easy. You don't have to change your life, much less get up off the couch, with no. There's zero risk of failure with no. Of course, there's also zero chance of success."

So if you feel like answering with the usual refusal when an opportunity comes tripping down, just remember even if you fail, at least you had the shot for success with a yes. Which is more to say with a refusal.

5. You Have The Power To Add Possibilities With A 'Yes'

If you feel like you don't have many choices in life, chances are it's because you've been shooting them down. A willingness to say yes opens doors — it's like a dominoe effect. You never know what kind of friends/ business opportunities/ referrals/ cool invites you can dig up if only you show up for one thing.

Savage shares, "Few possibilities in your life? You have little potential. To increase it, add new choices." It's like a decision tree: The path usually ends if you choose "no" and it usually keeps going to a different fork if you choose "yes."

6. Say No Only If You Want To Go Backwards

If it's really hard for you to say yes to a certain situations, frame it this way: A yes will move you forward, but a no will push you backward. And who likes erasing their progress?

According to self-development site Power of Positivity, "But here’s the reality: a yes will always give you more than a no. A no is guaranteed failure. Nothing is ever stagnant, so a no is usually backward progress." Motivate yourself by honoring all the progress you've already made; don't wipe away hard work whether if it's for your job, social life, or confidence.

7. It's A Sure-Fire Way To Build Confidence

When you say yes and it works out, you begin to gain faith in what you're capable of. Power of Positivity points out, "When you say yes more often to what feels good you open up the floodgates of opportunity. Here, you gain more beliefs in your abilities. This newfound confidence will bring even more positive momentum on your journey to success."

Chances are the thing you were scared to try wasn't as difficult as you imagined, and it'll only make you bolder to take on and try more — because you really can handle it.