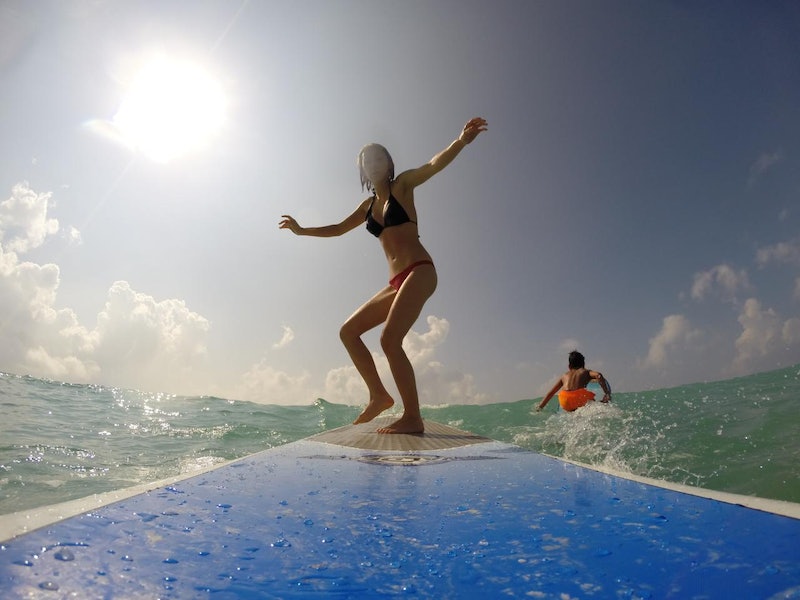 We all have them: firsts. First dates, first kisses, first days of school. Our life is a collection of them. The opposite of firsts is fear, for we’ll never do anything—live on our own, buy a car, ask out that stranger—if we don’t take a risk to try something new. It’s really that simple, black and white, do it or don’t do it.

A man walked on the moon and a woman became the first person to fly across the Pacific and Atlantic oceans alone, impacting them and others. These may be extreme examples, but you can be your own Neil Armstrong or Amelia Earhart. Some men tried wearing makeup for the first time, other people had sex, while some grandmothers tried pot (can you imagine?!). Gretchen Rubin created a whole empire based on The Happiness Project, where she tested her limitations and did several new things over the course of a year, bettering her life (and the world’s, I’d say). She did everything from sing in the morning to make an effort to get more sleep (by keeping her room dark and not getting sucked into answering emails or watching Netflix, for example). Without someone trying something first, many things would not exist: coffee, cars, phones, you name it.

Of course, Oprah is all about trying new things, too:

“Do the one thing you think you cannot do. Fail at it. Try again. Do better the second time. The only people who never tumble are those who never mount the high wire. This is your moment. Own it.”

A therapist friend of mine always says, “Do the thing you’ll regret more.” I thought about occasions where I’ve feared doing something for the first time (like going to a hip restaurant alone) and then being glad I did it (I'd feel empowered, more confident, and repeat the experience again and again at other cool eateries, until it was second-nature).

Doing things for the first time reminds me of Cognitive Behavioral Therapy (CBT), putting yourself in a seemingly uncomfortable situation that becomes less of a big deal the more it's done. And, surely, we've all heard the Eleanor Roosevelt quote, "Do one thing every day that scares you." Are you?

Here are reasons you, too, should do more firsts.

Popeye had his spinach, what do you have? A friend of mine was going on job interviews and kept getting panic attacks thinking about them. I wrote "anxiety" on a rock and gave it to her and she carried it with her wherever she went so it would be there during her anxious moments. She said it worked (perhaps mind over matter or else I’d be a millionaire) and she kept facing interview fear after interview fear. Eventually, she said it got easier, wouldn’t have a panic attack beforehand, and became a pro when meeting with HR personnel. (And, yes, she landed a job.)

Recently, I went to a storytelling show in Chicago and was moved by one of the speakers. I told him so afterwards—we had a mutual friend who runs another storytelling show, Mortified—and he revealed that Mortified had been the first one he ever did, and that led to him loving it and doing about 100 shows since. He said he'd been terrified at first, but saw other people had fun doing it and would be mad at himself if he didn't try. Like author Anne Lamott says in her book, Bird by Bird: Some Instructions on Writing and Life, starting is the hardest part and she advises to start small. So do it. You never know.

3. You could have a life-changing epiphany, discover your unknown potential, pursue a whole new career path, change the type of person you date, etc.

Remember how you didn't want to take that temp job at a non-profit, but then realized you felt more fulfilled than you did at your last job (where you'd spend 80 hours a week doing something that was okay, but that you didn't love)? Then you didn't want to do that marathon (you're not a runner; you're barely a walker!), but it was for a good cause. Soon, you loved running. And then there was the friend who wanted to set you up with her boyfriend's roommate. You were hesitant, but eventually agreed, and that first date turned into your fiancé. Hence, the unknown often turns into a surprising known, so why not give it a chance?

Sometimes, firsts are easy, but they're often challenging—and the tougher they are, the more you'll grow as a person, having gotten out of your comfort zone. Everything you experience is educational, from being lost in a big new city to mastering the bus and subway system. There is no growth without change, i.e., a "first."

5. You'll have a stronger appreciation for others who have done firsts you want to achieve.

You admire people who have done things you want to do, too. They inspire you to do the same or something related, whether it's taking improv classes, moving to New York to write, teaching abroad, or a thousand other things. Once we start and do what they've done, we'll unknowingly motivate yet more people to do it—or something even better.

6. When you face one new first, you’ll want to do another and it'll catapult into an endless number more.

Overcoming a first will increase your self-esteem and confidence, which will empower you to do another thing for the first time, maybe even one that scares you (like public speaking). You can add more and more new things to your "firsts" agenda. A friend can make a to-do list, also, and you can cross items off together.