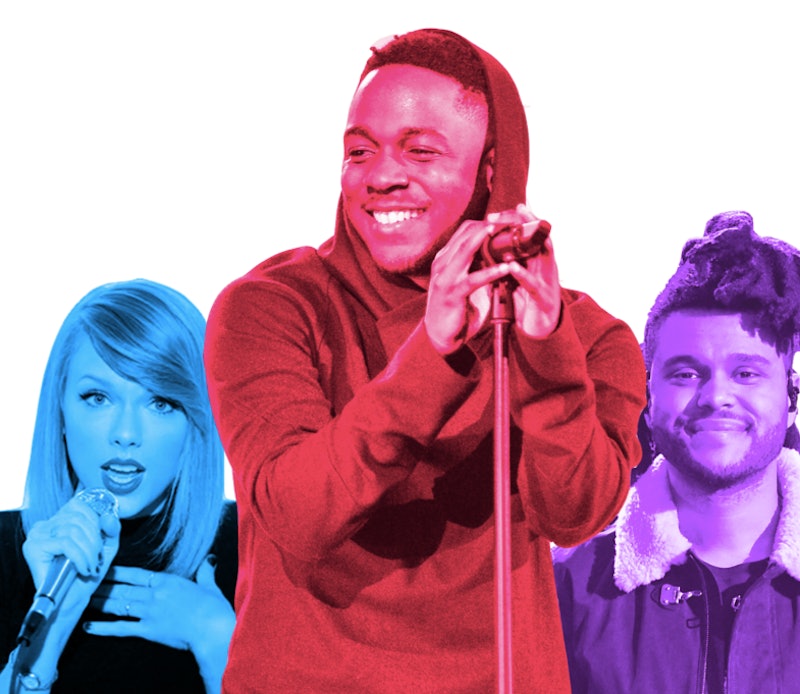 It might be Monday, but at least music fans get a little treat in the announcement of the 2016 Grammy nominations. As one of the most highly-anticipated music award shows, the Grammys are pretty much like the Oscars, but for music. So, if you received a nomination, it's a pretty big deal. As always, there are many artists getting a lot of love this year. With that said, who has the most 2016 Grammy noms?

It might surprise you, but it's not Taylor Swift. Who is it? It is none other than Kendrick Lamar with 11 nominations. Whoa. That's quite the impressive amount of noms for one year. Way to go, Kendrick Lamar! First, let's give him a 'round of applause. Now, here's what he scored nominations for.

Close behind Lamar with seven nominations are The Weeknd and Taylor Swift, which doesn't come as a surprise. They both have had some huge hits, especially with Swift's 1989 and The Weeknd's "Can't Feel My Face" and for his work on the Fifty Shades of Grey soundtrack.

I think it's safe to say that Lamar, Swift, and The Weeknd are all celebrating as the leaders of most noms for the 2016 Grammys and I can't blame them.