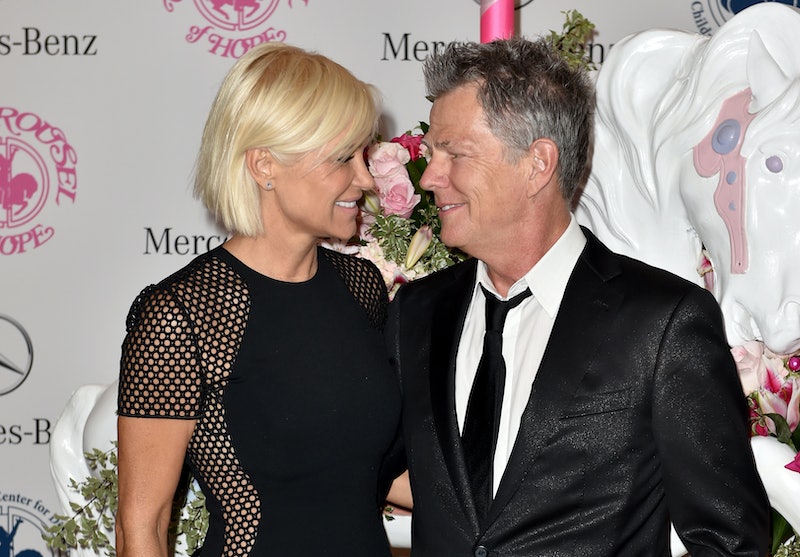 Real Housewives fans were pumped for the season premiere of Real Housewives of Beverly Hills. Well, until the fandom's morale took a hard hit with the announcement, on the same day of the premiere, that Yolanda and David Foster were divorcing. I couldn't believe the news when I heard it. They were the absolute perfect couple, at least as far as I could tell. David wasn't super present on RHOBH, but every time he was there, I could not help but feel the love between the two of them. Even through TV and social media, I felt like I was third wheeling with the former couple. Although I was only seeing them from afar, I feel like we all got to be a part of some of Yolanda and David Foster's cutest photos throughout the years.

Fans of Yolanda and David were pretty upset to hear about the demise of a seemingly perfect relationship, so I can't imagine how the reality star and music producer actually feel about the situation. But don't worry about Yolanda, she isn't letting the split get her down. The reality star even tweeted, "Love, respect and friendship is what should be left over when falling in love has faded away...... #HonorYourTime." So, let's abide by her wishes and take a look back at some of Yolanda and David's best moments.

This was just a month before they announced their split. The two went to the game to celebrate David's birthday and he even referred to Yolanda as the "Best Laker Girl Ever" in the caption. This seems so far from a couple who is about to divorce. I still can't believe it.

Everyone who watches RHOBH knows how much Yolanda loves her lemons, so that makes this photo of her and David especially cute.

3. Kissing In The Lake

This looks like a photo of a couple that is really truly in love. I could never imagine the two people in this photo splitting up less than five months later.

David was Yolanda's biggest support during her battle with Lyme disease. He did the challenge and even nominated big celebrities like Oprah Winfrey, Ariana Grande, and Katharine McPhee to take part in raising awareness.

I would have never expected a wealthy couple like the Fosters to take part in anything rustic like camping, so it's pretty refreshing to see these two having a good time roasting marshmallows over the fire.

Even with the daily troubles of Lyme disease taking over Yolanda's life, she and David still tried to have a romantic Valentine's Day with some flowers and time in bed.

Aside from wondering who took this intimate photo, my next thought was about how in love these two look laying next to each other.

David and Yolanda look like a normal couple out on a date night, and they were adorable taking this photo with their chef.

9. Smiling From Ear To Ear

The Fosters were always a very affectionate couple. Whenever we saw these two together, their smiles were always big and beaming.

Sure, they are smelling roses, but all I see was that they were looking at each other and didn't seem to notice anything else around them.

11. Gazing Into Each Other's Eyes

Yes, they are both wearing sunglasses, so they are not exactly gazing into each other's eyes, but I'm sure they can see past each other's lenses. Nevertheless, this is another precious moment with the former couple.

In all honesty, the matching vests are pretty cheesy, but it really worked for them. They really do seem genuine about it.

13. Chilling On The Boat

We can't even see their faces in this photo, but the closeness is definitely there. These two could not be any closer to each other unless they were sitting on top of each other.

The former couple tried to stay positive throughout Yolanda's Lyme disease journey and they took plenty of photos together during her various treatments.

It really seemed like these two were going to make it. They seemed so close and positive through thick and thin, but in the spirit of Yolanda's tweet, let's look at these old memories to honor their time together and not dwell on the separation in the present.