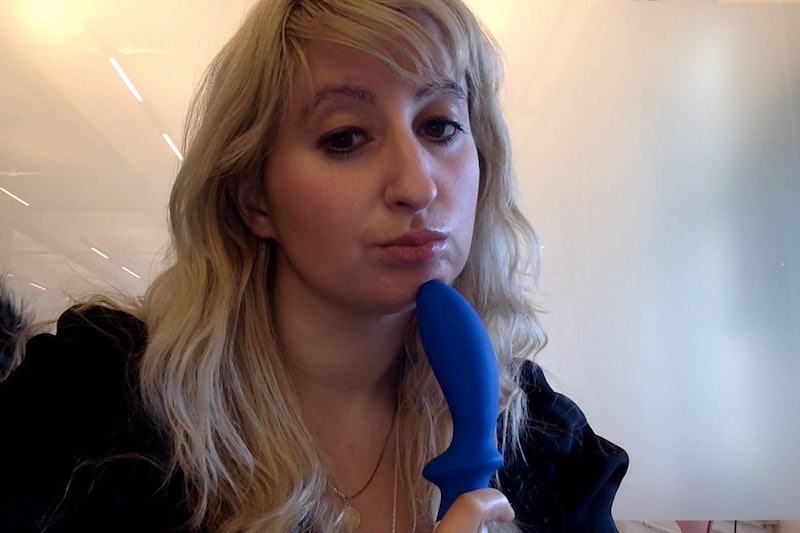 Forcing myself to click my Tamagotchi for seven days straight presented a real challenge, both on a logistical level and to my own identity. How did I come to the point where I was sending myself Google calendar reminders to pleasure myself? Eventually, I managed to remember every day, and the experiment began in earnest.

I hadn't told my boyfriend about the experiment. It wasn't that I didn't want him to know; I just felt like fewer and fewer things in my life were just for me, with no purpose but to make me feel good. I missed having an aspect of my sexuality that didn't involve having to figure out if someone else was having fun, or if I was doing a good job.

I finished a jog, and while still clad in some comically dorky tights (I did have time to take off my high-tech jogging fanny pack, thank you), I got down to business. And business was ... difficult.

I've always kind of thought of my own horniness like a tube of toothpaste: There's a set amount for the near future, and you can either work through it slowly or squeeze it all out at once. By Day 4, I felt like the tube was pretty fairly squeezed, and I would have been just as happy to watch some TV show about a British detective.

On Day 6, my non-masturbatory life just happened to feel like it is going to hell in a hand basket. At least you can jerk off, I muttered to myself spitefully. Then at least you'll have accomplished something today.

I got in my bed and immediately realized that my hand was not going to cut it. I took out my most industrial-strength vibrator — the one that needs to plug into a wall socket and makes sounds like I'm grinding coffee. I didn't have a sexual thought in my head; I was simply going through the motions. It's a situation I've been through many times in my partnered sex life, but rarely in my solo sex life. I was having, I realized, bad sex with myself. I kept plowing away, and eventually, I noticed that I was crying. I had been tamping down my feelings by staying busy the rest of the day, but here, with my Hitachi Magic Wand and nothing else to think about, I cried.

My tears remind me of the only sustained period of my life during which I regularly masturbated for non-sexual reasons. A few years ago, everything seemed to be going wrong for me. My anxiety made sleeping more than four hours a night impossible, and the sleeplessness compounded every worry and sadness. During this time, I felt too exhausted to have sex, or do much of anything besides watch TV or stare listlessly at my work computer for hours.