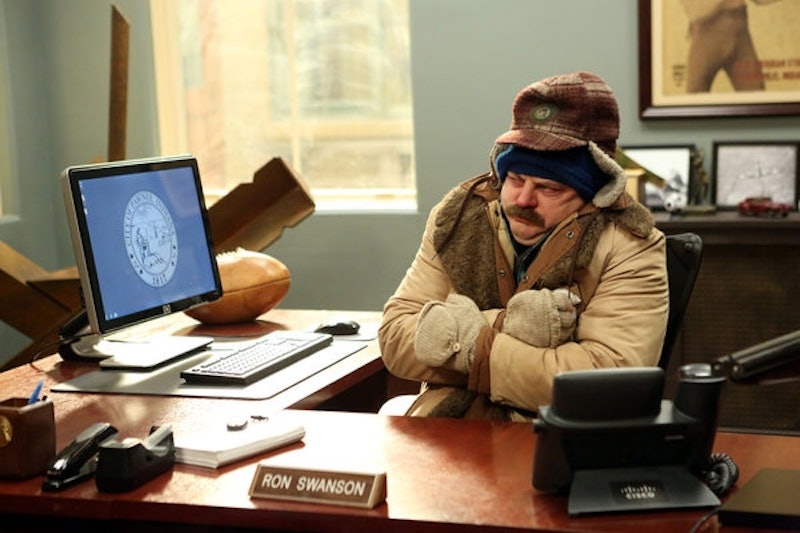 With all the gifts to buy and wrap, flights to catch, and parties to attend, getting sick before the holidays is probably the last thing on your to-do list. It's not the Grinch you have to worry about stealing Christmas, it's catching that nasty winter cold and missing the festivities! So, if you don’t want to spend your time celebrating under a bajillion blankets with only a box of tissues for company, you will definitely want to familiarize yourself with sneaky signs you’re getting sick.

"There are not as many pre-cold signs as there are with something more serious like the flu," Dr. Niket Sonpal, adjunct assistant professor of clinical medicine at Touro College of Osteopathic Medicine, tells Bustle. "People can seemingly go from one minute to the next and have a scratchy throat, sneezing, runny nose, cough, and feeling of fatigue."

It seems like colds become a lot more frequent in the wintertime. The end of year can be a super stressful time, and stress can suppress your immune system. The sudden change in weather, and the plunging temperatures, can make you feel like you’re about to come down with something awful. (Though as Dr. Sonpal points out, "No matter what your grandma might have told you, spending too much time in the cold air doesn’t make you sick.")

It’s time to be extra vigilant, and break out that hand sanitizer, because no one wants to spend their vacay laid up, sipping broth instead of eggnog. ‘Tis the season to drink a ton of fluids and get plenty of rest so you can fight any bug that might come your way. Thankfully, if you stay aware of these signs, you can fend off spending time sniffling.

You might have caught a cold if you are experiencing these symptoms:

If your nose has a mind of its own, and people are saying "bless you" so much you'd think the Pope was around, then sorry to tell you, but you probably are coming down with something. "If you are sneezing and coughing with greater frequency than usual and you have a runny nose, and head or chest congestion, you can assume this is the beginning of the common cold unless your symptoms worsen, in which case you should see a doctor," Dr. Sonpal says. Be sure to cover your mouth next time you sneeze because you might be passing the germs along to others with every ah-choo!

If your nose is like a faucet and is running clear and watery, then a sore throat and congestion are not far behind. You have cold my friend, and it's time to have that '80s movie marathon and make some soothing tea.

"At the beginning of a cold, you are typically coughing up some sort of phlegm, getting rid of an irritant in your lungs," Dr. Sonpal says. If a steamy shower and a Ricola or two hasn't helped with the hacking, be wary. A sudden acute cough means you're probably gearing up to fight a virus. Coughs are our bodies' way of healing themselves, clearing the upper airways and throat to help with infections brought on by cold or flu. Drink plenty of fluids to help, and break out that humidifier!

If it hurts to move, that tough gym class might not be entirely to blame. If the soreness sticks around for a few days that could be a sign of the flu. Start taking some medicine for the pain, like ibuprofen, drink plenty of fluids, reduce your stress, and get lots of sleep, and you will probably start to feel better.

Whether you're wearing so many layers you've basically cocooned yourself, then it's probably time to take your temperature. A low fever — under 100 degrees-ish — can go hand in hand with a cold coming on. It's not worth rallying for happy hour if you've got these symptoms, you don't want to push yourself and make things worse.

Sometimes a cool cloth on the forehead or popping some ibuprofen just doesn't cut it when it comes to scaring off a headache. Unfortunately, this pain can be a symptom of the cold and flu, or a sinus infection. Relaxing in a dark room can help ... or there is always stuffing your face with gingerbread (though not as of yet a medically proven treatment)!

Feeling stuffed up can slow you down big time. To clear that congestion, Dr. Sonpal recommends gargling with warm water and salt as well as doing a saline rinse to clear out bacteria.

A decrease in appetite can be part of our body's inflammatory response, according to HuffPost. It may help conserve energy to fight the virus, and can also be affected by a stuffy nose lessening our smell and taste. Still, "Make your meals count and be sure that you are getting the maximum amount of nutrition from everything you eat," Dr. Sonpal says.

Are the winter blues turning into flat out exhaustion? If you'd rather slump around the house in your PJs than going to your friend's karaoke holiday bash, you might be ill. Your body is telling you to slow down so it can fight the infection. "Sleep regulates the release of the hormone cortisol, which stimulates cells that boost the immune system," Dr. Sonpal says," so feel free to snooze the night away.

The common cold is highly contagious, so you are not doing anyone favors by going into work. Stay home, and let the cold take its course.

This article was originally published on Dec. 7, 2015