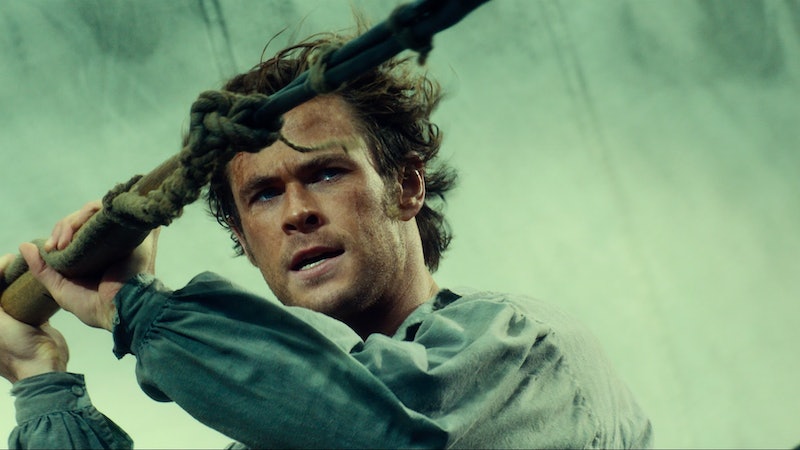 Calling all English lit nerds (including myself): you're going to want to check out In the Heart of the Sea for more than the fact that it stars your dream husband, the ever-handsome Chris Hemsworth. In the Heart of the Sea (which should not be confused with 2000's Cast Away, FYI) tells the story of a whaling ship expedition gone terribly wrong when said ship is sunk by a bull sperm whale. The surviving crew is left thousands of miles away from land and ultimately find themselves delving into cannibalism in order to survive. One word: YIKES. If this story sounds vaguely familiar, you're absolutely in the right. In the Heart of the Sea is based on a book of the same title by author Nathaniel Philbrick.

The nonfiction book was published in 2000 and was about the whale ship Essex, which actually was sunk by a sperm whale in 1820. (This was the real-life incident that ultimately inspired the great American classic Moby-Dick by Herman Melville.) Philbrick's novel won the National Book Award and is now finding its big-screen adaptation directed by Ron Howard, who's also directed Apollo 13 (1995) and A Beautiful Mind (2001), just to give you an idea of what we can expect from In the Heart of the Sea.

Howard said to the Toronto Sun about the novel, "When this came along... I thought it offered a lot of opportunities — and the story surprised me. I had no idea that Moby-Dick was inspired by a real story, and I also knew nothing about The Essex and the transformative power of that event and the survival struggle they faced on some of the characters. I thought it was just a really unique opportunity to explore the mystery and the drama of the ocean in a more mythic way, and yet it was inspired by truth. So it kind of reminded me a little bit of what I really liked Apollo 13, from a narrative structural standpoint and also what it reveals about the characters." For those of you who worry about book-to-film adaptations, fear not — Philbrick has seen the finished film and gave his seal of approval. "I was very pleased with it," he said to the Wicked Local Wellfleet, and added that he felt "lucky" to have Howard directing the adaptation. The adaptation of Philbrick's novel was a long time coming.

According to the Wicked Local Wellfleet, the film rights for Philbrick's book were optioned 15 years ago, after its publication. It seemed that the book was to remain in film adaptation limbo forever, until 2013 when Hemsworth came across the story, liked it, and "attached" himself to the project (star power never ceases to amaze, am I right?) But the journey from novel to film didn't stop there — Howard had phone conversations with Philbrick about the story and even read two more of Philbrick's books — one about the history of Nantucket, Massachusetts (where The Essex hailed from) and Why Read Moby Dick. One important cinematic element to look out for in In the Heart of the Sea is the echo communication between whales, which Philbrick said that Howard was interested in and even visualizes in the film.

It's always comforting to know that when dealing with a book-to-screen adaptation that the director and author have been as close in contact as Howard has been with Philbrick. Both of their visions are bound to make the film spectacular, as it sounds as if it's gearing up to be a glorious cinematic feast to boot (and I'm not just talking about Hemsworth, I swear).