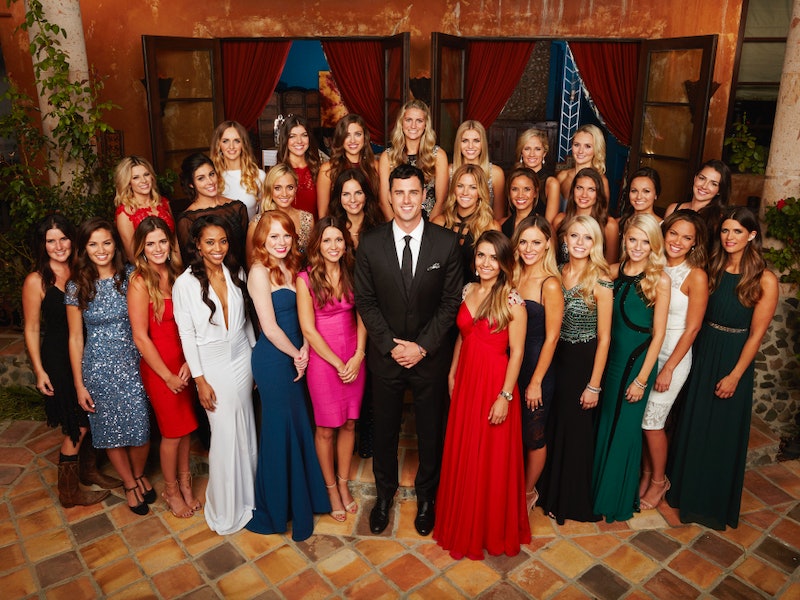 Another year, another season of The Bachelor. This year, Ben Higgins, fan favorite of Kaitlyn Bristowe's The Bachelorette, scored the title of America's most wanted boyfriend, and now ABC has announced all of the Bachelor contestants vying for his heart. Will things work out better for Higgins now that he's the one in charge of the roses? Considering that ABC is plugging him as the "perfect ten, err, perfect Ben" I'd say that the odds are definitely in his favor. Of course, that doesn't mean that he won't have to deal with a few challenges along the way — like, for example, making sense of the Bachelor contestants' super weird jobs. Us Weekly just reported what each woman's profession is, and they're about as bizarre as you could have hoped for.

This is hardly the first year that a ABC dating series has featured characters whose jobs definitely don't seem like they exist outside of a reality television show. In fact, Bristowe's Bachelorette season featured men whose careers were vague titles like "junkyard specialist" and "amateur sex coach." Basically that means that these contestants are allowed to write down literally any job that they want (no matter if it really exists) and the powers that be at ABC just throw their hands up and go, "okay, sure, you can be a 'healer.'"

So what weird jobs are we in for this season? Here are a few contestants whose jobs make virtually no sense.

Jackie has a *real* job, but it's definitely one you need to Google. Fortunately, you don't have to, because I already did. Gerontology is the study of aging and older adults, and many gerontologists are involved in public policy or research. It's unclear what Jackie actually does, as the field is pretty broad, but at least her job isn't as vague as "dog lover."

The Texas native is a self-described "cowgirl," which could mean a bunch of things. She could be a professional horseback rider. She could work at a Coyote Ugly-esque bar in Daisy Dukes and boots. She could literally raise cows. Either way, you know that the show is going to play up the whole "cowgirl" bit as much as humanely possible.

You have to appreciate Rachel's honesty: she could have gone with a title like "aspiring jewelry designer" or "former waitress" and no one would have questioned it. Rachel may not have had a job when she started The Bachelor, but at least she can safely put "reality show contestant" on her resume now.

Your guess is as good as mine with this one. Does she raise chickens? Really enjoy eating chicken sandwiches? The heir to the Chick-fil-A fortune? Most importantly, even if all these things were true, why would she choose this as her Bachelor title? Tiara is officially the season's biggest question mark.

I think most twins would tell you that being a twin is not a job, but apparently that changes when you and your sister go on a reality show. Haley is joined by her seemingly identical twin sister Emily, and I can't help but think that this could cause so much family drama. Why would either sister be okay with competing for the same guy, knowing full well that one of them is going to be rejected on national TV? (If you're rolling your eyes and saying "for ratings," you're smart.)

I am already excited for the spinoff series about these twins that is so obviously ahead of us.

Get to know these girls and more when Season 20 of The Bachelor returns on Monday, Jan. 4.