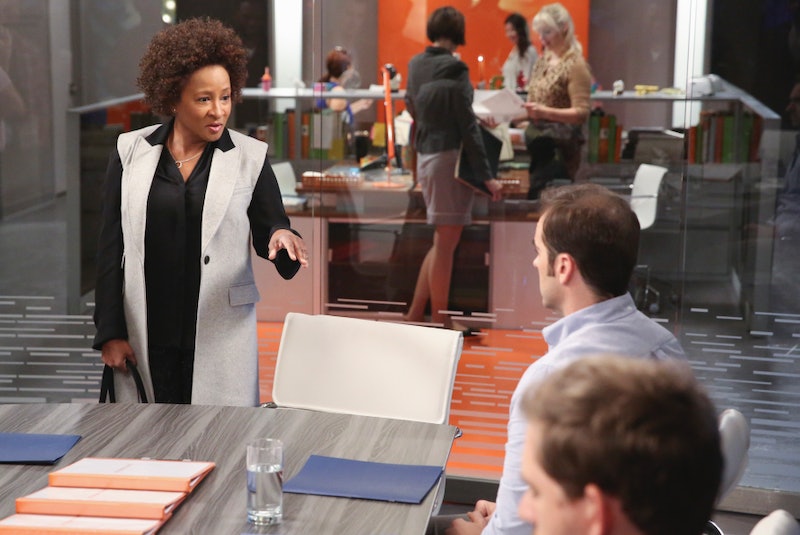 The most recent episode of black-ish debuted Wanda Sykes' new character, the ex-wife of Dre's boss and current owner of half of the company. And, even though her character claims that she doesn't want to "shake things up" at work, she's already shaken up the cast — but how long will Wanda Sykes be on black-ish ? When The Hollywood Reporter initially broke the story that Sykes was going to be joining the cast, they said that she would be a recurring character with an arc during the show's December episodes. But, after the Dec. 9 episode "Stuff," black-ish will be on a short winter hiatus.

Hopefully Sykes sticks around for longer than that, and comes back to the show in January, because she's a lot of fun in the role of Daphne so far. And, there's no limit on how many times the show could cut to Dre going through some kind of work problem, especially since it already has been working on developing a more stable work ensemble for Anthony Anderson to play off of. And as a black woman, she'll bring a new voice to Dre's workplace — especially since she's the boss.

But Sykes' availability is limited, since according to Hollywood Reporter, she's also going to be a guest star on this season of House of Lies. So, she'll be splitting her time between the two shows. It's certainly possible for a guest star to do so — Laurence Fishburne was on black-ish Season 1 and Hannibal at the same time, with no problems there. And Pops was the standout Season 1 character, too, so there's even a precedent for a double-duty performer being particularly hilarious.

Deon Cole, who plays Charlie Telphy, has been the most valuable non-Johnson player for a while now, but Sykes has given him a run for his money in just a single episode. Of course, he'll still be missed, but he revealed on Twitter that the reason he's off the show is because of his position on TBS' Angie Tribeca.

Since that show is preparing to drop all of its episodes at once on January 17, and is already filming a second season, Cole must not have been available to shoot black-ish. But, now there's a new hilarious character here to fill in his place. Wanda Sykes' Daphne will have to become the newest black-ish heavy joke hitter. I think she'll be up to the challenge — and hopefully she sticks around for awhile.