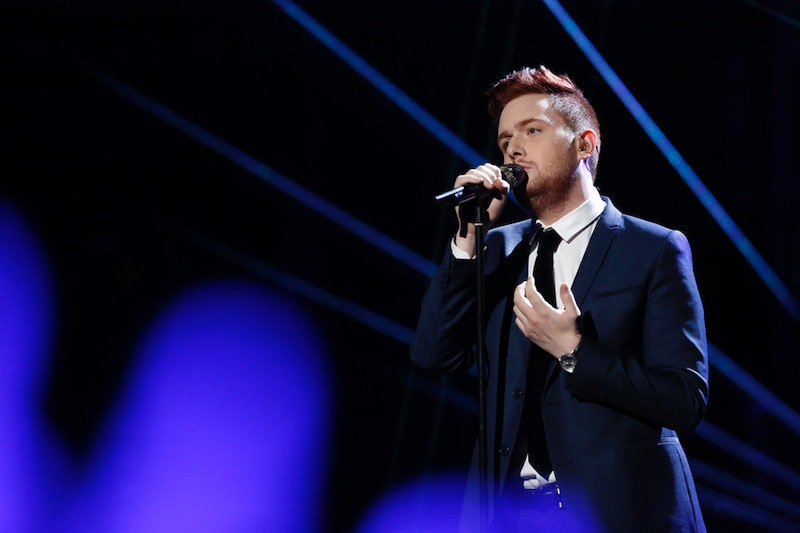 GOOSEBUMPS. That's all I have to say about Jeffery Austin's The Voice semi-final performance to Cher's "Believe." Well, not really — there's a lot to say, and they're all good things. Austin's performance was totally stripped down and extremely emotional — which is what made it so great. If he was able to wow the rest of America the way he did me and the coaches, then there's a chance that this is the performance that will get Austin into the Live Finale.

Speaking of the next week's Live Finale, only four of the remaining nine contestants will be performing, so tonight is obviously a crucial night for the semi-finalists and Austin's performance is going to be hard to beat. The 24-year-old's arrangement of "Believe" was strong, emotional and full of beautiful vocals. It was as if Austin cast a spell over me with his voice — my head was forced up from my computer and my eyes couldn't move away at the screen. It was THAT good.

Austin has proven himself to be one of the greatest ballad singers on this season of The Voice. He's blown us away with other hits like "Dancing On My Own" and "Turning Tables," but this is no doubt his greatest performance yet. The Team Gwen singer has greatly increased his chances of making it to the Final 4 with tonight's showing, but will it get him there? It's not definite.

Austin's greatest competition in this game is Jordan Smith. Unfortunately for Austin, Smith is also a ballad singer and he has quite the following. Smith has yet to perform tonight, but if his previous performances are any indication, it's going to be a performance to remember. There's no rule that says both ballad singers can't make it to the finale, but most likely only one will advance. No matter if that one to advance is Austin or Smith, Austin at least got a tweet from Cher, and that's a victory in itself.

More like this
Rachel Fuda Gave Birth Just Weeks Before 'RHONJ' Season 13
By Brad Witter
Twitter Thinks This Is The Real Reason Zach Sent Christina Home On 'The Bachelor'
By Grace Wehniainen
Danielle Cabral From 'RHONJ' Is No Stranger To Reality TV
By Brad Witter
Genevie Explained Why She Was Wearing A Sling During 'The Bachelor'
By Grace Wehniainen
Get Even More From Bustle — Sign Up For The Newsletter
From hair trends to relationship advice, our daily newsletter has everything you need to sound like a person who’s on TikTok, even if you aren’t.