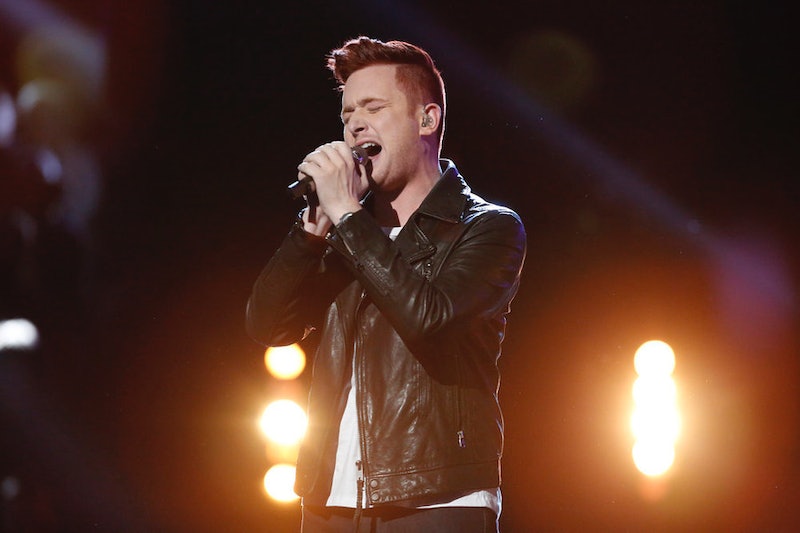 It's not an episode of The Voice until tears are shed — well, not really, but they've certainly become a staple this season. The Top 11 show ended on an emotional note with Jeffery Austin's powerful rendition of Robyn's "Dancing On My Own." Seriously, Austin's performance was so moving it brought his coach, Gwen Stefani, to tears. By stripping the song down to it's skeleton, he was able to give the lyrics a new meaning. This skill is a valuable one in the music industry, and is not one that many of his competitors possess. With this performance, Austin has proven himself to be a strong competitor in this game and is bound to go far as long as he continues to find a way to stand out.

Austin has been one of my personal favorites since the beginning, but his performances always seem to get overshadowed by a similar contestant in this game — Jordan Smith. There are many similarities between Austin and Smith, which is why Austin often falls to the background. Both men have soulful sounds and are able to inspire people with their music. The issue for Austin is that Smith is a little better than him.

While Austin is great, Smith is amazing. Smith established himself as a unique artist with his mind-blowing performance of "Chandelier" in the Blind Auditions. Since then, he's continued to grow his following by delivering moving performances week after week. Plus, he's usually placed last in the show, which also gives people the impression that he's the best — since the producers usually save the best for last.

The game was changed this week, though, when Austin was given the opportunity to perform last. This, paired with his excellent song choice and touching intro, helped him rise above Smith. Austin was able to steal the spotlight by doing something a little different than his norm. By stripping down a popular dance song — something Smith hasn't yet done — Austin established himself as an innovator and made himself stand out. If he can continue to do this, he'll have enough ammo to even the playing field between him and Smith — and if he does it right, he might even come out victorious.