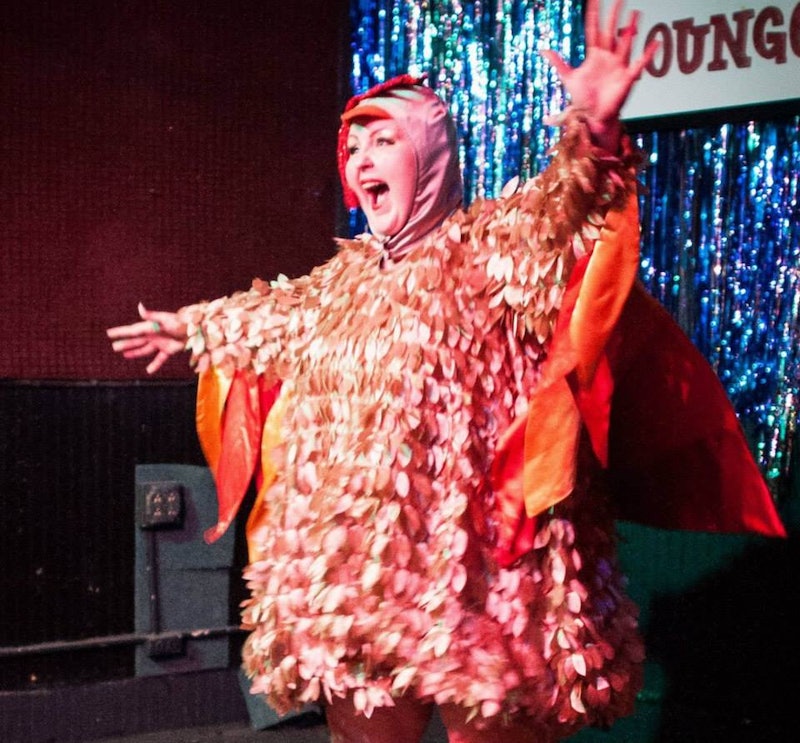 I recently watched the documentary Burlesque Undressed , which signaled my introduction to the world of the intersection of body positivity and burlesque. TBH, I used to think that burlesque was principally a celebration of nudity and little else; something designed more for the male gaze and less for the women performing themselves. But watching the docu-film was a first glimpse at the reality. The burlesque industry is, in fact, a forward-thinking, body positive industry in which, it would seem, everyone is welcome.

Before conducting some research, I was pretty clueless as to what constituted a burlesque performer. When thinking of the term, I imagined mostly white women with perfectly proportioned hourglass figures strutting their stuff and making the audience gasp in delight — basically Dita Von Teese. I didn't realize that burlesque performers come in all shapes and sizes, genders, and ethnicities. Whatever the medium and whatever the routine, it's clear that many burlesque performers radiate self love and want to encourage others to do the same. And any lingering doubts we might have about that are likely more rooted in sexism and the stigmatization of the nude, female body than in truth.

Here are just some of the body positive burlesque performers making strides to inspire you to love your unique body as well.

Blaize is a buxom babe who knows how to own her body. Her website informs readers that she is, "Europe's top showgirl and burlesque queen." What I love most about Ms. Blaize is that she is an ambassador for All Walks Beyond The Catwalk, an organization founded by Erin O'Connor, Debra Bourne, and Caryn Franklin, which aims to "challenge the fashion industry’s dependence on unachievable and limited body and beauty ideals by respecting diversity." This is a movement we should all get behind.

Lillian Bustle is a riot! Here she is seen performing her 2015 holiday act, for which she acts as a ballet-dancing, strip-teasing turkey, while pulling comedic and cutesy faces. Her feather-embellished underwear is just glorious. Aside from her burlesque talents, Ms. Bustle promotes body positivity activism and gave an epic TEDx Talk entitled "Stripping Away Negative Body Image," which highlighted the importance of loving your own body while analyzing how burlesque helped her on her own personal self love journey.

The tantalizing and talented Perle Noir, otherwise known as the "Black Pearl," is according to her website's bio, "Described by many as the 'reincarnation of Josephine Baker.'" I spotted Ms. Noir performing in Burlesque Undressed and was mesmerized by her act (which is inspired by Josephine Baker herself), and in which Perle Noir wore a banana skirt and really got the crowd going. This representation of the diversity of burlesque while paying homage to some of the classic greats was a sign to behold.

Michelle L'amour is a lady who loves her butt and wants others to love their behinds, too. This clip is from a performance called "The Buttcracker," where she puts her butt cheeks to work in a ballet-inspired number. It's hilarious and provocative in equal measure. Ms. L'amour also wrote an article for the popular burlesque blog 21st Century Burlesque and gave gals advice on how to make the most of their ASSets so we can all show our butts some love.

Dita Von Teese in not afraid to poke fun at the term "sexy," which we can all gauge from this video in which she does plenty of "unsexy" things, such as filing quarterly taxes and microwaving a lean cuisine entrée, in a provocative manner. IMO, Von Teese is proving that anyone can be sexy, and our interpretations of the word are often rooted in social constructs.

Von Teese also released a line of luxury maternity lingerie for new moms called Von Follies. During an interview with Elle, she explained, "My lingerie lines — even before the maternity bras — are not about seducing men or even being sexy. It's about bringing beauty and luxury to your everyday life, and not storing it on the shelf or putting it on for a man. My relationship with lingerie has always been about self-seduction and what makes you feel good." Lingerie for new moms that's actually meant to make them feel glamorous and body pos? Oh, yes.

Mat Fraser is an awesome actor and burlesque performer, often known for his role as Paul the Illustrated Seal in American Horror Story: Freak Show. In an interview with ABC, Fraser discussed how his mother took thalidomide during pregnancy. "I was brought into this world with these small and perfectly-deformed limbs that you see before you," he said. "However, it did get rid of the morning sickness, so, you know, not all bad!"

Fraser doesn't let anything get in the way of his performing and further discussed casting people with disabilities with ABC. "There's no excuse really for not casting a regular wheelchair-using actor in a wheelchair-using part," he added. "People call it cripping up. It's akin to blacking up or black-facing in America. I always say: If you're worried about whether it's OK or not, just replace the world disabled with black. And if it still seems OK, carry on." It's brilliant to see a man in the burlesque industry totally owning his body and encouraging others to do the same.

Midnite Martini specializes in aerial burlesque and her performances are breathtaking. However, it has not always been an easy path for Ms. Martini. According to her site, she "fell victim to the pressures of the 'perfect' body and developed binging and purging and body dysmorphia." After overcoming such demons through her loves of aerial and burlesque, she began focusing on instilling positive body image in others. Her website reads, "Midnite has never shied away from her past struggles and is happy to use her position in the community now to talk openly about body image, eating disorders awareness, and the empowerment of burlesque that helped her finally find love for her body."

If you are feeling like you don't love your body as much as you know you should, perhaps it's time to turn to burlesque and pave the way to a body positive future.

Want more body positivity? Check out the video below, and be sure to subscribe to Bustle’s YouTube page for more hacks and tricks!