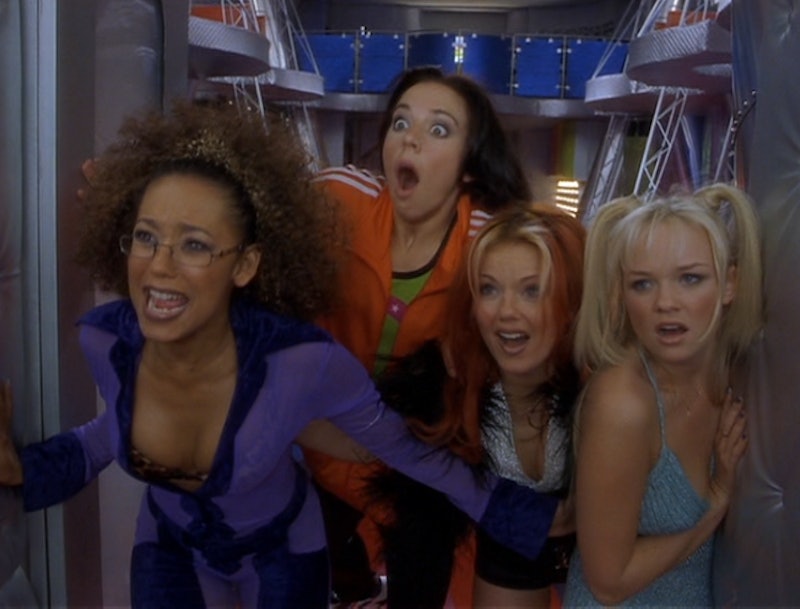 Although the year you were born totally wasn't up to you, the kids of the '90s are notorious for our nostalgia and our persistence in returning to the trends of our childhoods. By recreating '90s trends and bringing the styles back in vogue, we get to hold onto our past innocence and put off becoming "real" adults for just that little bit longer. Because how in the hell can I be expected to understand my tax returns when I'm still wearing overalls, right mom?

The desire to hold onto yesteryear is probably one felt by almost every generation in its 20s dealing with not being teenagers anymore, yet being perceived as adults in the eyes of most. Our parents went through it, our kids will probably go through it, and in 10 years time, I bet everyone will be wearing T-shirts from Forever21 that read "'00s Kids RULE." Maybe by idolizing the time period we grew up in, we make it easier to blame our problems of today on the time period rather than ourselves.

But without getting too deep, even if the '90s wasn't the best decade (it was) there are still a lot of styles to be taken from this pivotal time known as our childhoods. I mean, if these looks were good in the golden days, why wouldn't they be good now?

And don't forget that chokers don't begin and end with tattoo chokers. Baby goth me had a studded choker as well as a plain piece of black ribbon to tie around her neck for that très chic look.

Making your own tie dye is actually really fun and easy. To bring it to the 21st century, dip dyeing your clothing is basically the same process but with a cooler result.

Plaid and tartan basically became universal after the '90s. Whether we're talking a worn, flannel shirt in a Kurt Cobain style or a bright matching Clueless plaid set, this look is effortlessly cool.

We wore them as kids, and they were one of the most unlikely contenders to make a comeback (seriously, did nobody get the memo about how badly these shoes can cut you up?). But for the full '90s nostalgia effect, wear some frilly ankle socks to protect your feet.

These are the butt of that eternal dad joke: "I think you need some new jeans. Those have holes in them." Why? Because dad was too old in the '90s to understand ripped jeans and he's too old to understand them now. Really, they're a staple of any grunge kid's wardrobe.

Platforms have definitely been around for centuries and were made all the more popular in the '70s, but the '90s took on this trend and brought it to a whole new level. The '90s platforms were the champion footwear of The Spice Girls, and who doesn't want to be a Spice Girl?

The best part about wearing a scrunchie is that they almost look even cooler on your wrist. So if your hair's having a down day, then your scrunchie doesn't have to go to waste.

Maybe in the 21st century we can wear both straps of our overalls for a more Kylie Jenner casual look.

Backpacks are the unsung hero of my life. Although a bubble backpack is a bit impractical for my party lifestyle, my cute leather one leaves both hands free for busting some moves. That's '90s style.

The '90s was a mash-up of the IDGAF attitude of grunge style and the bright colors of Pokemon and Gwen Stefani. By throwing back to each of these '90s staples — and with the right amount of nostalgia in hand — we can easily figure out how to incorporate essential '90s looks into our own personal sartorial repertoires.

Want more '90s inspo? Check out the video below, and be sure to subscribe to Bustle’s YouTube page for more!

More like this
Rita Ora’s Sheer Dress & Mermaid-Inspired Prosthetics Stun At British Fashion Awards
By Sophie McEvoy
24 Photos Of The 'Love Actually' Cast Then & Now
By Grace Wehniainen
17 Photos Of The 'Wednesday' Cast Vs. The 1991 'Addams Family' Cast
By Grace Wehniainen
The 'Kenan & Kel' Reunion On 'SNL' Took A Dramatic Turn, Thanks To Keke Palmer
By Brad Witter
Get Even More From Bustle — Sign Up For The Newsletter