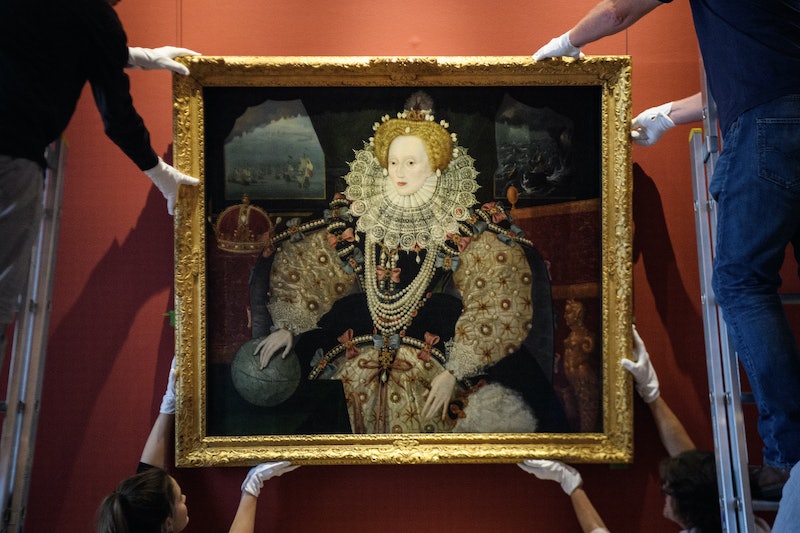 These days, most of us don't have to deal with any strange protocol regarding our hair. We can go big, go bold, go natural, or dye it lavender to look good on Instagram, and nobody can do a damn thing about it (though sometimes, managers and bosses still try to control how women — especially black women — wear their hair in the workplace). But in the past, women's hair was considered a powerful, intensely symbolic thing, which supposedly offered up information about a woman's sexuality, social status, magical abilities, and values. It's been dyed by leeches, piled on our heads to squash our brains, donated to temples to attract spirits, and generally subjected to all manner of indignities. It's a wonder we haven't evolved to be bald.

Many cultures have strong histories of viewing hair as powerful or mystical. There's the tradition of "witch bottles" in 17th century England, for instance, which dictated that putting some of your hair in a bottle and either exploding or burying it would protect you from witchcraft. And then there's the Biblical myth of Samson and Delilah, where the legendary strongman's strength is completely sapped after his hair is secretly cut in the night. But throughout the ages, female hair in particular has been the subject of many strange beliefs, and these beliefs were reflected everywhere from medicine to fashion to law.

So next time you feel annoyance after the latest Internet hair argument about whether coconut oil can solve everybody's hair woes or why bangs are never the answer, take heart. At least nobody's going to go to jail if they knock your hat off your head.

1. Big Hair Stopped Ladies From Thinking Too Much

This particular belief comes courtesy of Victoria Sherrow's Encyclopedia Of Hair, but it's difficult to find any other sources for it, so it may be something that was passed down as an oral tradition. According to Sherrow, there was a belief in ancient Japanese culture that women's hair had a unique and very anti-feminist job: to be piled on top of a woman's head and place pressure on the brain so that she wouldn't think too much.

It's true that for large swaths of Japanese history (except for the Heian Dynasty, where hair was worn long and straight so that it swept the floor), noble women were expected to arrange their hair in elaborate and weighty styles on the tops of their heads. Long hair, however, has always been a strong part of Japanese society and ritual, so it may be that this was a folk belief concocted to explain (or make a joke about) how much hair aristocratic women balanced on their scalps.

2. You Can Dye Your Hair With Leeches Rotted In Wine

Blame Pliny The Elder for this one. The famous Roman physician had a series of very inventive recommendations for dying hair and getting good results; however, one of his ideas for dying hair black left a little something to be desired: Pliny advised those seeking raven-colored tresses to let leeches putrefy for 40 days in red wine in a leaden vessel, and then apply the resulting mixture to their hair.

Somewhat charmingly, he warns against another method of hair-dying that involves putrifying leeches in a vinegar solutions, and then rubbing it onto the head and sitting in the sun, because the concoction was so strong, your teeth might go black. The only way to avoid this fate was to keep some oil in your mouth while the dye was applied applied. Pliny: always looking out for your best interests, if not the leeches'.

3. Uncovering A Woman's Hair Was Illegal

In medieval Europe, there were many distinct codes regarding how a woman should wear her hair, but they all pretty much boiled down to one specific line of thinking: covered hair meant a woman was virtuous, uncovered hair meant she was not so virtuous. Married women were supposed to cover their hair in public in all circumstances, and the only way to get out of it was to be in Italy, where they didn't care.

This led to the development of some interesting laws about pulling a woman's headdress off in public — because doing so would imply all sorts of things about her character and sex life. In some parts of medieval Europe, from Burgundy to Lombardy, laws were put on the books that equated pulling off a woman's headdress with verbal assault or public insult to her entire family, and perpetrators faced seriously heavy fines — far heavier than any punishment given out for insulting a man.

4. Female Hair Could Lure Back Soldiers' Spirits From War

In Hair: Its Power And Meaning In Asian Cultures , Gary Ebersole lays out the many ways in which hair was important in Japanese religious culture over the course of its history. And it turns out that women's hair was thought by many to have significant mystic powers, from inducing safety to fertility to general good luck. One temple in Kyoto still has one of the ancient ropes made from donations of human hair by female worshipers, and it's one of the holiest parts of the complex.

More poignant, though, are reports of women who left their own shorn-off hair at temples and places of worship during times of war, in the hope that the spirits of their brothers, fathers, and husbands would be attracted to the hair and return home. Female hair was meant to be attractive to spirits and women were urged to be careful in how they managed their hair, in order to make sure the wrong ones didn't get caught up in it. But in this case, the hair was meant to be for family members and lovers. Men's hair, apparently, didn't have this power in the slightest.

5. Prostitutes Needed To Be Blonde

The Romans and Greeks appear to have had a slightly fraught relationship with blonde hair. On the one hand, they seem to have prized it highly; the Emperor Commodus sprinkled his white hair with gold dust, and Aphrodite and Venus, goddesses of love, were both often depicted with blonde hair. Roman women would even wear blonde wigs made from the hair of conquered European women. And yet the ancient obsession with blonde hair had a darker side: it was used to mark out prostitutes from the rest of society.

In 40 AD, under the rule of the (seriously crazy) Emperor Caligula, Rome passed a law making every prostitute dye her hair blonde or wear a blonde wig, to distinguish her from dark-haired "virtuous" ladies. Unfortunately, the idea seems to have backfired, because it made blonde hair more desirable. Whoops.