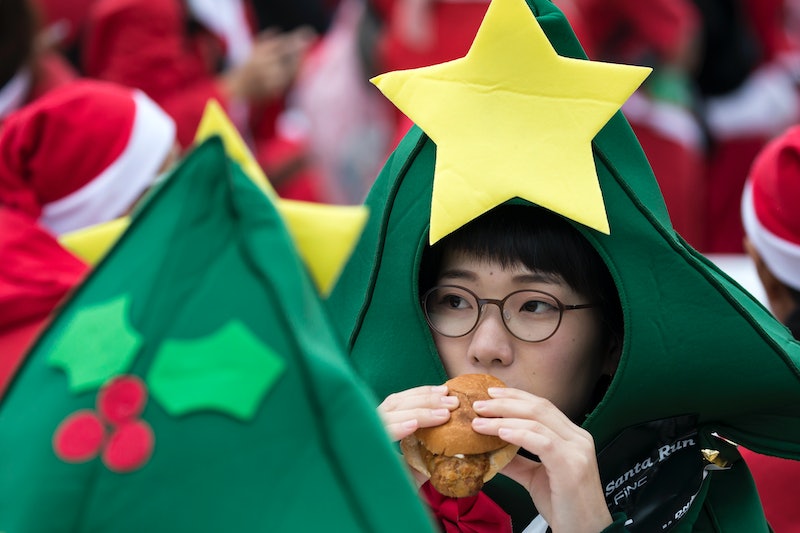 December is well under way, and with the start of Hanukkah this week, the holiday season is, too. So, to mark the occasion, Tracy Soren and Jessie Jolles — better known as comedy due Soren and Jolles — are back with a brand new video imagining what it would be like if Christmas and Hanukkah were people… and you guys? It's spot-on. I say the following as a celebrator of Christmas who typically enjoys the month of December: Christmas? I love you... but you're kind of obnoxious.

Christmas is that friend who's constantly one-upping everyone. Christmas has to be the best at everything, whether it's decorating her cubicle at work or gossiping in the break room. Christmas has a lot of self-confidence, but she's also oblivious and self-centered — she assumes that because she thinks she's the best, everyone else thinks she's the best, too. If she comes to visit, she stays for way too long and doesn't usually take the hint when it's time for her to go. She appears to be incapable of acknowledging that a world outside of her own bubble exists, and while she's not consciously mean-spirited, her willful blindness is harmful nonetheless.

As is the case with all good comedy, this sketch gets at an important point: Christmas isn't the only holiday celebrated at this time of year, and it's extremely problematic that it eclipses holidays like Hanukkah so completely. As Lilit Marcus observed in The Guardian on Dec. 6, Hanukkah is still woefully underrepresented at best or ignored completely at worst throughout the season: Apartment and office buildings decorate with enormous Christmas trees, while menorahs or other Hanukkah references are tiny or non-existent; “happy holidays!” is really just a euphemism for, “At least I'm not just saying Christmas”; and the commercial trappings that take over pretty much every public space throughout the month of December are overwhelmingly Christmas-related. And that's not really OK. Wishing someone a happy Hanukkah if that's the holiday they celebrate shouldn't be an afterthought; it should be a necessity.

I'm telling you this as a concerned friend, Christmas: You might want to think about putting the following behaviors to rest.

Scroll down to watch the full video.

1. When Christmas Throws a Party, It HAS to Be the Event of the Year

It's so big, in fact, that everyone gets the day off for it, even if they don't go. I mean, I'm all for days off — but it's kind of bullshit that this isn't the case when anyone else throws a party, you know?

2. Christmas' Gossip Is Kind Of Weird

I actually think a magical lamp that burns a week longer than it should is more mind-blowing. It's cool, Hanukkah.

3. Christmas Will Not Shut Up

Not even if you're trying to work. Christmas still insists on singing the same dang songs, over and over and over again… for two months straight. And yes, these days it's two months, because as far as Christmas is concerned, its season begins sometime around Halloween. Holiday creep: The struggle is real.