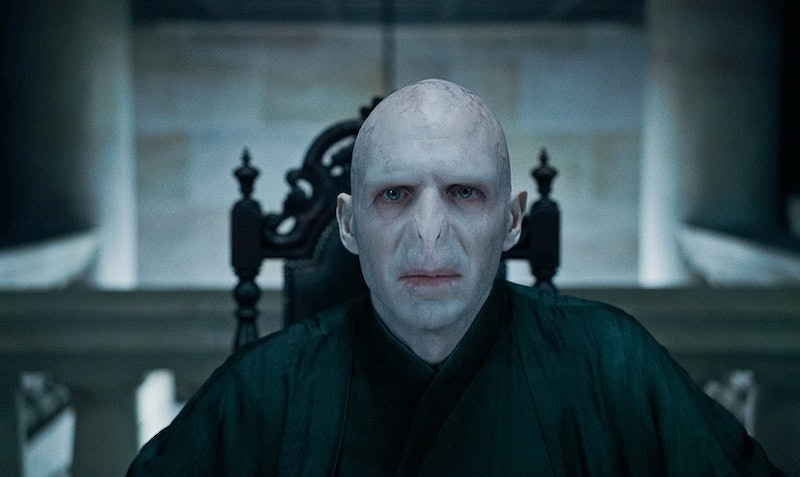 Donald Trump has centered his presidential campaign on pandering to the most ignorant and hateful U.S. citizens. Many have drawn comparisons between Trump's rise to political clout and Adolf Hitler's. But on Tuesday morning, J.K. Rowling compared Trump to Voldemort — and apparently toupee beats bald when it comes to bad.

Of course, Trump's supporters don't see him that way. In their minds, the Republican candidate is a man who commands respect for his "no PC bulls**t" attitude. By which they mean his fearmongering, jingoism, and overtly racist diatribes. People of color get beaten up and shouted down at his rallies. Trump himself makes fun of people with disabilities, during his campaign speeches.

Most appallingly, he has voiced support for an immigration ban and a registry and identification program for members of a particular religion. After Trump cited a 14-year-old myth about "thousands and thousands" of New Jersey Muslims cheering on the 9/11 carnage, his Islamophobic remarks escalated. In an interview on November 20th, Trump said his administration would "sign [Muslims] up" for registration in "a database system that tracks [them]." On December 7th, he called for a total ban on Muslim immigration "[u]ntil we are able to determine and understand this problem and the dangerous threat it poses."

These last two incidents drew comparisons to Hitler's politics. Most citizens realize that Trump's Islamophobic policies violate the 1st Amendment. Even Lindsey Graham has called out The Donald's rhetoric as "dangerous" and un-American, along with fellow Republicans Jeb Bush, Chris Christie, and John Kasich.

Among voters, Trump's call for an immigration ban sparked a firestorm of tweets comparing him to Lord Voldemort. On Tuesday morning, Rowling herself waded into the fray, saying:

BOOM. AVADA KEDAVRA, MAHFAHS. From the Queen of Hogwarts herself, there you have it. Donald Trump isn't just eerily similar to Hitler. He's actually worse than Voldemort, a Hitler analog in his own right.

Rowling's tweet has been retweeted and faved more than 50,000 times. Compare that to Trump's "Statement on Preventing Muslim Immigration," which has a paltry 4,100 retweets and 6,600 faves. In 17 hours, Trump's tweet has only managed to generate 10 percent of the support Rowling's comparison earned in its first 180 minutes. Personally, I'm taking that as a sign that goodness will prevail over Nazi wizards with bad hairpieces and strange accents.

More like this
Savannah Guthrie Got Her First-Ever Tattoo With This Former Wild Child
By Suzanne Zuckerman
Kukulkan From 'Wakanda Forever' Has A Surprising Connection To Marvel History
By Grace Wehniainen
Slip Shorts Are My Hack To Making Dresses More Comfortable — & These Lacy Pairs Are So Cute & Comfy
By Maria Cassano
Here's Everything You Need To Know About The 2023 Grammys Runtime
By Grace Wehniainen
Get Even More From Bustle — Sign Up For The Newsletter
From hair trends to relationship advice, our daily newsletter has everything you need to sound like a person who’s on TikTok, even if you aren’t.