While personally I subscribe to the Liz Lemon school of thought when it comes to walks of shame — that is, that they should be called a "stride of pride," because let's be real, you just got laid and that is awesome — but despite that, this is actually kind of cute: It's not set to be released until spring, but the upcoming Elizabeth Banks film Walk of Shame already has its first trailer.

A loose summary of the plot, just in case you're too lazy to simply look at the video embedded below and hit 'play': Elizabeth Banks portrays an LA newswoman named Megan who, after being dragged to a club by her friends, meets a real-life Disney prince-looking kinda guy (James Marsden) and ends up going home with him for a night of messily eating pizza and sex. While she's there, she gets a call from her boss saying that the network was considering her for a job as main anchor, and that they were going to come and see her work that night's news shift to decide if she deserves the job. As a result, Megan leaves in a rush — just in time to see her car, which had her purse, wallet, phone, and ID inside — being towed. Now, she has literally a few hours to make it home from downtown LA, and y'know...downtown LA at night can be kind of a terrible place to be. It's hilarious.

You can check out the trailer below. In addition to Banks and Marsden, Walk of Shame also stars Gillian Jacobs and Sarah Wright, and was directed by Mr. Deeds' Steve Brill. It opens in theaters on April 25. 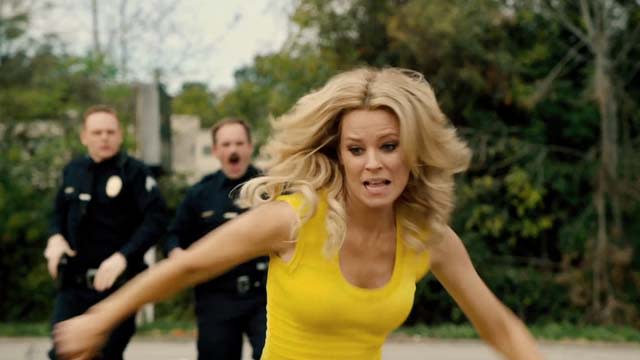