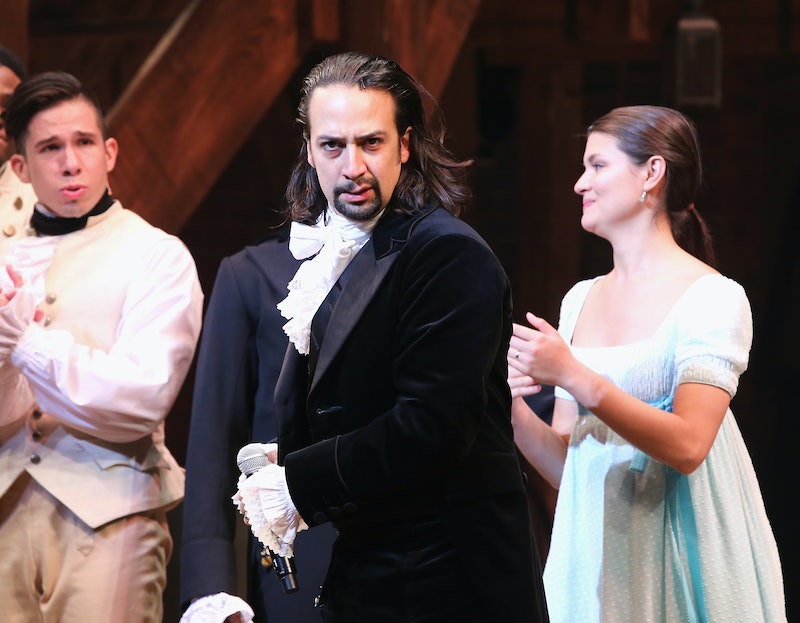 Every Hamilton fan is united by their "I am the trash of the thing" moment. For me it was about the time I started sashaying while muttering "werk, werk" under my breath to and from the bathroom in my office, but at least I am faring slightly better than a friend of mine, who may or may not have drunkenly exclaimed "southern motherf***ING DEMOCRATIC REPUBLICANS" on the subway the other night. (Our forthcoming book, Making Friends In New York 101, debuts in January 20-never.) The thing is, when you're a huge fan of Hamilton the musical, there is pretty much no limit to the hell you will put your last remaining shred of dignity through to express that love. We're down for the count and drowning in/narrowly avoiding arrest for being a public disturbance for it.

Praise be to all that is nerdy, we at least live in a world where there is so much Ham Trash that we basically have our own Ham Landfill. I'm lucky enough to live in the greaaaatest city in the woorrrrrld, so I usually don't have to look far to find another fan — but even for those of us where are flung far and wide, there is an aggressive fan community clustered on the Internet to give us life. We are all of us strangers, but united in our unabashed dorkery and obsession for Hamilton. And bless us all for it, because otherwise we might feel self-conscious when we do all of the following inevitable things that shameless Ham fans do:

You Become A One-Person Hamilton Missionary

People around us used to be complex, multi-faceted human beings who were either friends, coworkers, acquaintances, or strangers. Now there are only Hamilton Fans and People Who Have Obviously Not Listened To Hamilton Yet, and we have taken it upon ourselves to make sure each and everyone of them is brought to the light.

You're Smug AF When You Convert Someone

Think Jefferson's "Aha-ha-ha ha" in Cabinet Battle #1, and that's the approximate level of smug you are when your "yeah, yeah, I'll get to it" friend turns into an "I AM NOT THROWING AWAY MY SHOT!" friend. <3.

You Miss An Entire Night's Sleep Watching Through All The #Ham4Hams ... Twice

You Peruse The Maelstrom Of The "Hamilton" Tag On Tumblr

If you can dream it, someone has 'shipped it. And made fanart of it. And a crossover of it. ... And called Lin Manuel-Miranda "dad".

You Wear Your Hamilton T-Shirt To Work

Dress code? What dress code? (At least we don't smell like new money or dress like fake royalty.)

You Are Following All Of The Hamilton Cast Members, Hamilton Parodies, Hamilton Hashtags, And Maybe Your BFF (?) On Twitter

There's a new trending hashtag in this fandom to keep up with on the DAILY. Keep your cast album handy, y'all.

WHOSE STUPIDLY BEAUTIFUL BRAIN DECIDED TO DO THIS TO US?! UNRELATED BUT RELATED NOTE: WHY IS HISTORY SO SAD?!?!?!?

Aka, literally every character introduced in Act One. They are your cinnamon rolls, too good, too pure for this revolution. Or, y'know. Act Two.

You're Confused By Actual Pictures Of The Founding Fathers

What were you listening to before the cast album came out? Was there music before that? Is this real? Are you real?! ... What have you done to us, Lin?!?!?

You only need, like, what? Half a kidney? Maybe someone will let you borrow one of theirs!!

Alas, it's too late for your Ham Trash Heart.