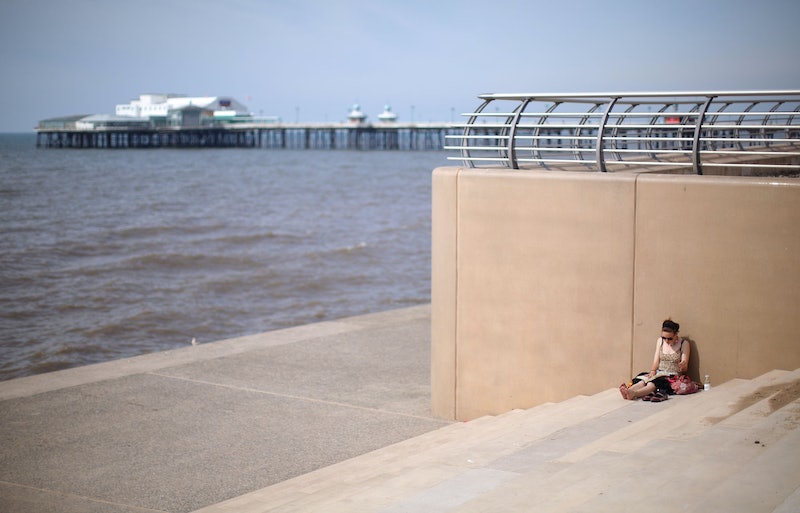 When we think about love and romance in classic literature, we usually think of a more restrained time. We picture Juliet up on her balcony spouting poetry to her beloved Romeo, or Gatsby staring moodily at that green light, or Jane Eyre pining over her boss while his crazy attic wife tries to burn the house down. People in classic lit are always writing love letters, and dating seemed to mean folks staring passionately at each other from across rooms. Yes, people had affairs, but it seems like they mostly consisted of perfumed notes and stolen kisses. How refined!

Except... was it? Or is classical literature actually full of dirty secrets that we totally missed on the first read-through? Did we just completely miss the gay sex scene in The Great Gatsby back in high school? Or Juliet's entire speech about how she can't wait to get it on with Romeo? It turns out that old-timey authors still had their characters getting very friendly with each other, they were just subtle about it. Sometimes even a little sneaky, if they were trying to keep their books from getting an x-rating. But if you missed these steamy moments on the first read through, don't worry: here are a few sex scenes in classic books that we never even realized were sex scenes.

1. Nick Carraway Has Sex With a Man in The Great Gatsby by F. Scott Fitzgerald

To be fair, Fitzgerald is really subtle on this one. But at the very end of Chapter Two, after partying hard with Tom and Daisy, Nick's riding the elevator with this dude who's inviting him to come to lunch one day... and then there's a very suggestive ellipses, and suddenly Nick is standing next to this guy in bed:

I was standing beside his bed and he was sitting up between the sheets, clad in his underwear, with a great portfolio in his hands.

Um... so Nick has sex with another man and no one ever talks about it again? If you say so, Fitzgerald.

2. Something Goes Down in the Garden in Jane Eyre by Charlotte Bronte

OK, so this one is kind of up to your interpretation. But, before it's revealed that Edward Rochester is already married to his secret attic wife, he and Jane have an awfully romantic encounter in the garden. After half of a Gothic novel of will-they-or-won't-they, Rochester finally proposes to Jane, and she gladly accepts. And THEN... well, Rochester whispers, "come to me entirely now," in her ear, and then Jane just starts talking about how he looks kind of aggressive (or that his "exaltation" was "savage"), but she's totally into it. He keeps asking if she's happy, and she keeps telling him yes. Look, maybe they're just cuddling but... maybe it's something a little more?

If you read this play way back in high school (or even middle school), you might have missed that Romeo and Juliet definitely get it on — in act three, scene five, it's the morning after, and Juliet's trying to convince Romeo that it's not quite daybreak, and he doesn't need to leave to go be banished yet ("it was the nightingale, and not the lark," and all that jazz). But before all that, Juliet has a lengthy monologue wishing that her wedding night would just come already, because she is so freaking excited to consummate this marriage. She also wishes night would come so that it'll be dark, and Romeo won't notice how much she's blushing (because teenagers have always been horny and awkward). Awww. Let's just pretend they live happily after ever, OK?

4. Molly Bloom Loves Herself in Ulysses by James Joyce

It shouldn't surprise anyone that it's a little hard to tell when a sex scene is happening in Ulysses — it's pretty hard to tell what's going on at any point in Ulysses (don't let that discourage you, though! It's a confusing masterpiece). After a whole book of Leopold Bloom's stream of consciousness and Stephen Dedalus's stream of whining, Joyce ends with Molly Bloom's internal monologue. She's Leo's wife, and she spends the whole final chapter lying next to him in bed, masturbating, in one heck of a run-one sentence. (Well, OK, the last chapter is eight sentences... over the course of 36 whole pages). At first glance, the chapter might seem like a jumble of nonsense, but it ends with Molly finally getting off to the memory of Leo proposing to her. That's actually pretty darn romantic.

5. There Are Some Very Dirty Giants in Gulliver's Travels by Jonathan Swift

If you're easily grossed out, now is the time to walk away from the computer. And if not... well, you've probably heard of a book called Gulliver's Travels. A normal-sized Englishman goes on charming adventures where he meets the tiny people of Lilliput and the giants of Brobdingnag, who are about 12 times his size. But you might have skimmed over that part where the Brobdingnagians treat him as a weird living doll, to the point that the ladies at the Brobdingnagian court use him as a living sex toy. He's about six-inches tall compared to them, so you can just... you can imagine exactly how that whole thing is happening. Jonathan Swift casually drops this little detail with no explanation, and then just goes on with his book like he hasn't ruined all of our lives forever.

6. Edna Feels Fiery in The Awakening by Kate Chopin

The Awakening is pretty much all about sex, but the actual sex scenes are pretty subtle. Edna Pontellier is a well-to-do wife in a stifling marriage, and she suddenly realizes that she's a human person with desires and she can pretty much do whatever she wants. If she wants to go have an affair, she's just going to do that and everyone else can deal with it. But the actual moments when she has sex with her illicit lover are just so brief and vague. Like: "It was the fist kiss of her life to which her nature had really responded. It was a flaming torch that kindled desire." Oh wait... what? The chapter's over now? We were supposed to infer that they had sex based on that one really great kiss? OK, then.

7. Odysseus Cheats on His Wife All the Time in The Odyssey by Homer

We might have missed a few details of The Odyssey back in high school. At least, we all remember that Odysseus took forever to get back home, and spent the whole time freaking out over whether his wife Penelope would assume he was dead and re-marry. Penelope didn't re-marry, of course (even though she had plenty of opportunities), but Odysseus really shouldn't be the one to talk. He sleeps with the enchantress Circe — and not just once. After they go to bed the first time, she continually "separates" him from the other men to "talk," with the implication that there won't actually be that much talking. And then, of course, Odysseus is trapped on Calypso's island — she's keeping him there as her "husband", but Odysseus is definitely attracted to her, and it's pretty clear they're having sex. So maybe Odysseus shouldn't hold Penny to so much of a double standard.