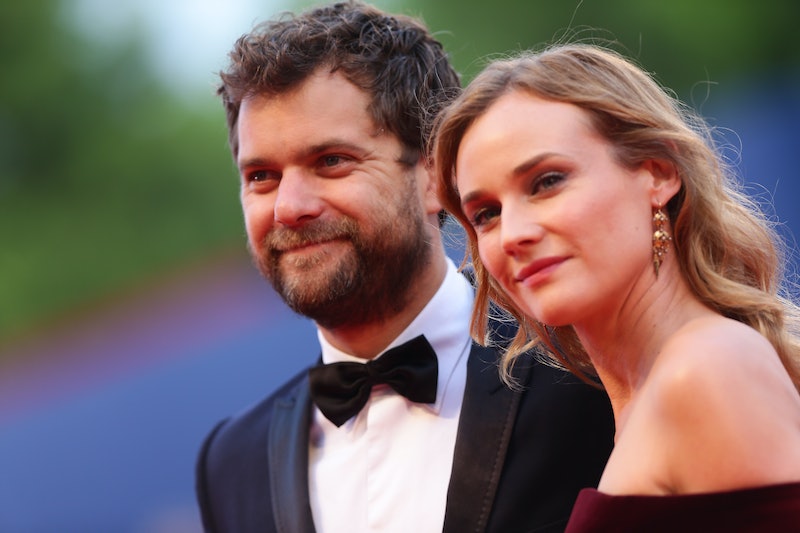 Diane Kruger may be one half of one of the most gorgeous, yet low-key, celebrity couples out there, but even she isn't immune to the green-eyed monster. Her longtime love Joshua Jackson stopped by The Ellen DeGeneres Show on Tuesday to discuss his show, The Affair, and the host asked him about his often steamy scenes on the show. Specifically, DeGeneres wanted to know if it's easy for Jackson to strip down and lock lips on camera with multiple actresses. You know, the same scenarios we all deal with at work... right?

Jackson admitted that it's not easy or comfortable at all, telling DeGeneres,

No, it's not. It's just not. You're emotionally naked, physically naked, all sorts of naked. It's one thing for the guys, its awkward certainly. But for women, it puts women in a particularly vulnerable space, so there's all of that stuff that goes into those scenes that you have to work through. There's just the weirdness of a job, a profession where you're like, "Hi, my name is Josh, we're going to get naked and then we're going to have sex and then we're going to talk about how it feels afterwards. Is that cool? Alright, great. Let's go." I mean, that's what I do for a living.

And then I go home and I go, "Babe, I had a great day today. I had sex with two different women and I felt like it went really well."

The couple of nearly 10 years apparently don't watch the show together, but Jackson admitted Kruger would prefer if he looks a little "schlubby" when filming said sexy scenes. As if that's possible, amirite? In all seriousness, though, who wouldn't feel uncomfortable knowing millions of viewers are watching their significant other basically naked on screen? And they're not the first celebrity couple to admit the inherit awkwardness of sex scenes. Even Channing Tatum's wife Jenna Dewan Tatum and Jamie Dornan's wife Amelia Warner have admitted watching their sexy spouses stripping down on camera is hard to watch. Celebrities, they're just like us!

Since Kruger is German, the two will spend Christmas in Germany together, which Jackson described as "like Disneyland" thanks to Kruger's family's very festive celebrations. DeGeneres kindly gave Jackson something to help him fit in during the festivities — an adorable pair of lederhosen, complete with snowmen, garland, and bells. Somehow I bet only Joshua Jackson can make lederhosen look sexy. Here's hoping his lovely lady won't mind!

More like this
I'm 42 & I've Never Had Sex. Is It Too Late?
By Sophia Benoit
Sandra Bullock, Girlboss Extraordinaire
By Matt Harkins & Viviana Olen
Spice Girls’ Net Worth: The Richest Member Is Wealthier Than The Rest Combined
By Hugh McIntyre
Long Live Bennifer!
By Allie Jones
Get Even More From Bustle — Sign Up For The Newsletter