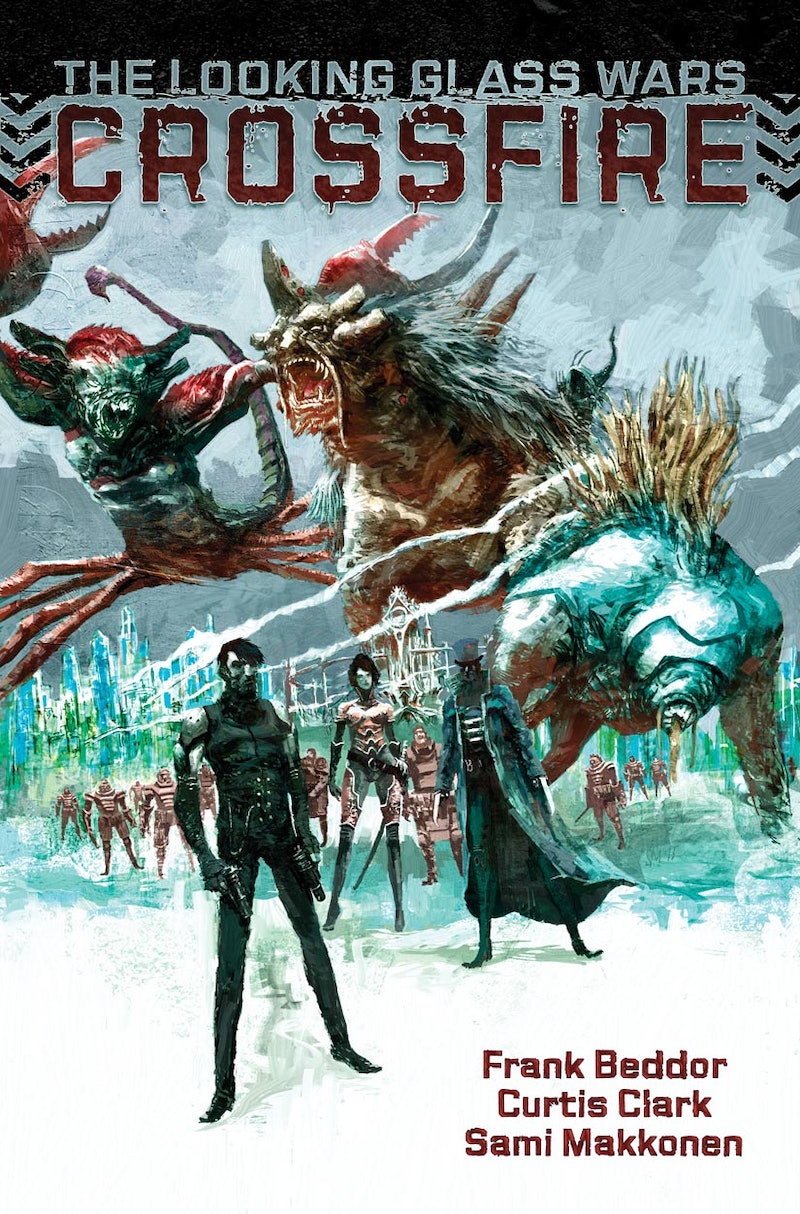 Since Frank Beddor's Looking Glass Wars trilogy concluded with ArchEnemy in 2009, fans have been clamoring for more information about the fate of Wonderland after the creation of the Everqueen. Now, Beddor is all set to continue Alyss' story in a graphic novel duology that begins with Looking Glass Wars: CrossFire , but the author needs your help. The CrossFire Indiegogo campaign ends on December 16, and Bustle has all the deets on this impressive new series, plus an exclusive look inside the upcoming graphic novel.

CrossFire opens where ArchEnemy left off. Alyss and Dodge Anders have married, and he now acts as her emissary to the Boarderlands tribes in the wake of terrorist attacks. The tribes don't seem too happy with Anders' role as king, however, and believe his new title marks an abandonment of his soldier background for a life of luxury.

Meanwhile, Alyss must handle political dealings in Wondertropolis. From the Indiegogo campaign:

After the creation of the Everqueen, Alyss Heart of Wonderland faces great difficulty as she fends off political assaults from rival suit families while struggling to maintain diplomatic relations with the tribes of Boarderland. More vulnerable now than ever before, she barely escapes an attempt on her life. No longer sure whom to trust, she aligns with controversial new allies in order to keep Wondertropolis safe and prevent havoc on Earth. And yet the fight, the battle, finds her—as it seemingly always does—and Alyss discovers that all decisions, even the right ones, have consequences.

CrossFire is already complete, with 160 pages of full-color glory. In his Indiegogo campaign, Beddor asks fans "to finance the first printing," to the tune of $20,000. At the time of this writing, CrossFire has received 36 percent of its funding goal, with little more than a week to go.

Set campaign tiers range from $15 to $3,000, and include plenty of interesting goodies. For $105, artist Sami Makkonen will include a donor's likeness in UnderFire: the CrossFire sequel. A $150 donation gets you signed copies of the Looking Glass Wars trilogy in hardcover — now out-of-print. WriMos and other writers will be interested in the $2,500 tier, which gets your novel read, edited, and commented on by Beddor himself.

Makkonen is the illustrator behind the final four volumes of Beddor's Eisner Award-nominated Hatter M series, which centers on Hatter Madigan's quest to find Alyss after her initial disappearance from Wonderland. His work is beautiful, and it's among the swag donors can access in the Indiegogo campaign's higher tiers.

Bustle teamed up with Beddor for these seven opening pages:

If you loved the court intrigue of the original Looking Glass Wars trilogy and the graphic novel adventures of Hatter M, you're sure to love Looking Glass Wars: CrossFire. PDF versions of Beddor's new graphic novel are expected to ship in January 2016, with print editions coming out the following Spring. For more information, or to secure your own copy, check out the CrossFire campaign on Indiegogo.