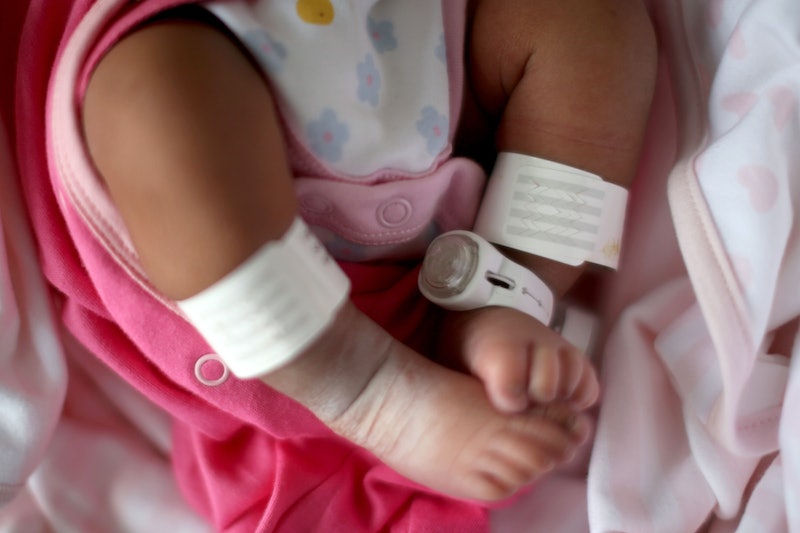 It seems that parents choosing to name their children unconventional names may not actually be that unconventional themselves anymore: According to BabyCenter's 2015 report, unusual baby names have risen significantly in popularity this year. BabyCenter began releasing some of the most interesting pieces of analysis from their 2015 user database last week, and according to their annual survey, 43 percent of parents reported liking unusual names. It bodes well for little Saint West, doesn't it?

But just because unusual names are popular as a trend doesn't mean that all unusual names are equally popular. It turns out that there's a sort of hierarchy of unusualness, with many BabyCenter users who chose more unique monikers picking names that weren't very popuar, but still somewhat familiar — think Sierra or Colby. A small percentage of the group did, however, pick completely out-there baby names, with everything from ancient Greek gods to movie characters serving as their inspiration. Naming babies after Instagram filters is apparently a trend now, too.

BabyCenter subsequently created a list of some of their favorite unusual names parents chose for their babies this. There was one important criterion for which names made the grade, though: Each name had to have been chosen at least three times to make the list, meaning at least three babies this year wound up with that particular title. Although BabyCenter organized their list by gender, I honestly think most of them are pretty gender-neutral; they'll be fitting for both boys and girls. Besides, gender neutral baby names are on the rise, so let's embrace it.

Here are 10 of the best unusual baby names from 2015. To see the complete list, make sure to head over to BabyCenter.

Indigo is one of my favorite shades of blue and I think the name is equally as pretty to say and spell. I love that this name is very unique, but also recognizable to most.

This is actually my last name, so I found it peculiar to be included on a list of first names, especially with this unusual spelling. But hey, it's definitely an unconventional choice!

The Social Security Administration has recorded 909 babies being named "Story" from 1880 to 2014; it seems to have risen in popularity in recent years, too, with 102 people naming their babies "Story" in 2012. It sure would make a good story (see what we did there?) to tell how you got this name!

It could be a cool, sentimental memento to name your child after a state; if you hail from Alabama, maybe consider this for an unusual name choice.

I find "Remi" to be a very cute name; it also reminds me of Leah Remini, of whom I am a huge fan, though, so maybe I'm biased. The name came in in 662nd place for most popular in 2014.

"Lyrik" is a more unusual version of the name and word "Lyric," which is a great choice for parents who are music lovers or musicians. I find the name to be very poetic; it's a nice choice for those who want to keep the art of music in the family.

If you're familiar with Christianity as a religion, you probably know of the many books of Psalm, which were written by King David most famously, also had contributions from figures like Moses and Solomon. This is a great, unusual name to pick if you want to use something biblical, but are tired of parents choosing names like "Mary" and "Joseph."

George Lucas named his daughter Everest, which might perhaps inspire other parents to chose this name for their child. I love how peaceful and calm the name sounds rolling off the tongue, as well as the potentially aspirational meaning behind it: It refers to the world's tallest mountain. Great heights to climb, both literally and figuratively, no?

This makes me immediately think of Kanye West, but the idea of naming a kid after a cardinal direction is also pretty neat.

Meaning: "To Be Heard." French.

If you are a fan of the painter Clade Monet, art in general, or even just appreciate the French influence behind the name, this could be a great choice for an unusual baby name. Perhaps your baby will feel the artistic vibes and be the next big thing in Impressionism. Think of the self-fulfilling prophecy!

More like this
On TikTok, #SeñoraEra Shows Latinx Users Becoming Their Mothers
By Natalia Perez-Gonzalez
The 4 Most Forgiving Zodiac Signs
By Kristine Fellizar
The Best Time To Date After A Breakup, According To Experts
By Bustle Editors
How This Founder Turned Her Antidote To Doomscrolling Into A Business
By Anna Scott
Get Even More From Bustle — Sign Up For The Newsletter