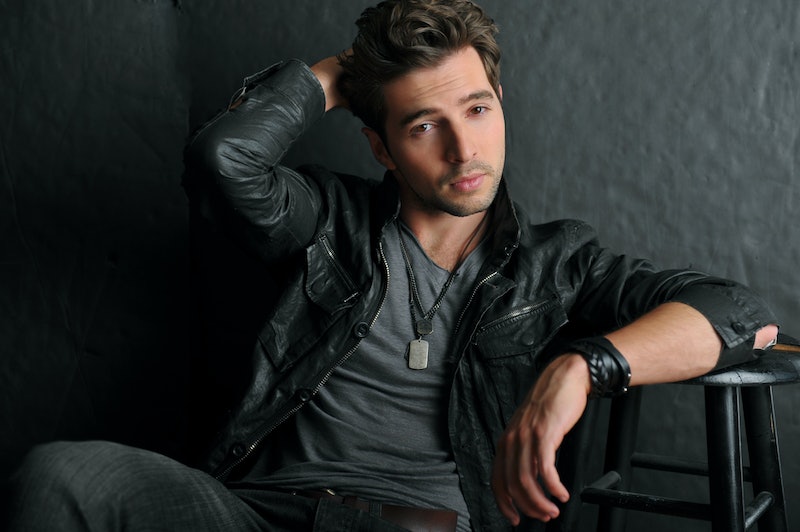 We may still have a few weeks to go before the Pretty Little Liars Season 6B premiere, but diehard fans have plenty to obsess over before that glorious day arrives. In many ways, it will feel like a brand new show, thanks to the five-year time jump. And while we're all obviously eager to catch up with what our core characters have been up to since we last saw them, there will also be a few new faces appearing throughout the season that are definitely worth a closer look. Bustle recently had the chance to chat with PLL newcomer Roberto Aguire, who plays Liam Greene on the show, and learned a few teasers as to what his character will bring to the Rosewood table.

"He lives and works in Boston. He's an editorial assistant in a firm over there. And he's basically this really nice guy that has a very positive outlook on life," the actor shares, though I'm sure that outlook may change once this town is through with him. And if you're thinking that an editorial assistant position sounds a lot like Aria's job in publishing, then you would be correct, because the two of them actually work together. And while Aguire assures us that the two of them "get along very well," he revealed that Liam's main focus will be, surprisingly, on Ezra, not Aria.

"Where we see [Liam] at the beginning of the second half of the season is him helping Ezra get his book published, after having gotten his first one published. So that's kind of where I jump into the story five years after the flash forward." And given the rather dire state that Ezra finds himself in (like turning to alcohol, for example), he's probably not going to be the easiest client in the world to handle. (You're going to have to earn that paycheck, Liam!) But his connection to Ezra will apparently lead to some fun interactions with a few of our other main characters as well. "When I get to go to Rosewood, I meet Ezra's social group there, so I get to interact with a whole bunch of people on the show. Who, specifically, I'm not allowed to say, but you guys will see!"

Speaking of things he's not allowed to say, Aguire admits that he knows who the Season 6B Big Bad is, but kept his lips completely sealed as to who it could be. "You'll have to tune in to find out." So clearly he's already got the whole secret-keeping thing down. (You might say he's willing to take it to the grave.) However, he was kind enough to provide us with a few emoji clues as to what's to come.

So let's break this down the best we can, shall we?

I think it's safe to say that the devil's face could represent the new threat, or "beast" as Aguire calls him/her, that'll haunt the Liars from here on out. Perhaps that's why this otherwise sunny Rosewood is being brought into cloud-covered darkness.

Undoubtedly this means that death is on the horizon, hopefully for none of our leading ladies, though!

We all know what the representation of two hearts suggests: love is in the air, but for who? Hanna is engaged to a new beau, but maybe this is in reference to Aria or Emily. Considering that the last image is a book, though, (book = publishing) maybe Liam and Aria decide to mix a little business with pleasure? Anything is possible on this series!

Basically, January 12 needs to hurry up and get here already, so we can all be glued to our TV screens when Season 6B premieres at 8 p.m. on ABC Family.

And for a quick PLL refresher, check out Bustle's very own drunken recap video below: