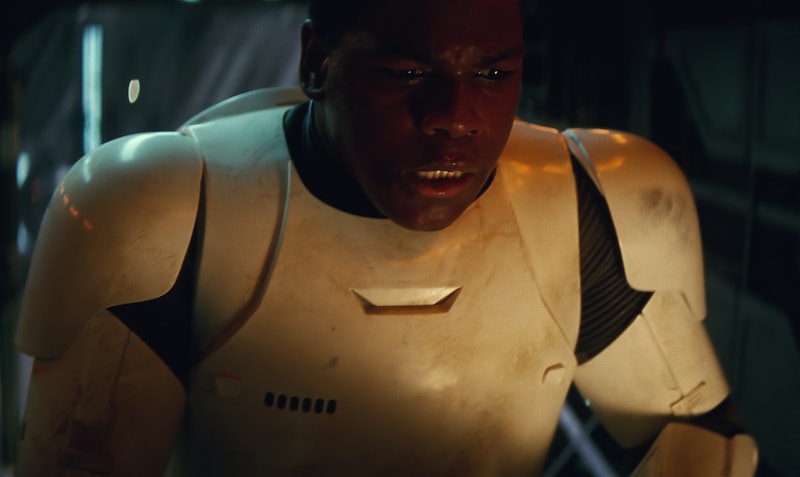 If the world thought that they were going to get a ton of spoilers and loads of information after The Force Awakens press conference, then they thought wrong. The L.A. press conference continued director J.J. Abrams' wishes to keep the details of the movie hidden under a shroud of secrecy that no one will witness until Dec. 18. Even so, Mr. Abrams and the cast weren't going to be entirely stingy about everything. They were nice enough to throw a couple of bones to the audience of hungry press members — and I was there to partake in all that glorious information. One of the first questions that popped up during the press conference was: does The Force Awakens will have a post credits scene? It's a detail that everyone is dying to know. Diehard fans are probably expecting that there will be a tease to Episode VIII or even the Star Wars spin-off Rogue One . When Abrams was asked if there will be a post-credits stinger, he looked into the audience and flat out said, "No."

Since the Star Wars franchise is under the Disney banner and they are known for putting a little extra scene after the credits (specifically the Marvel ones), moviegoers have been trained to sit through no matter what kind of movie it is. In the case of The Force Awakens, Abrams just saved us a bunch of time by telling us to not hold our breath for a "special scene." Sorry to burst your bubble, folks.

On the brighter side of things, I learned some other bits of information from the press conference.

Yup. She is. The Mindy Project Star moderated the press conference and is also friends with director J.J. Abrams. She made it clear during the conference that she was going to ask the cast and crew questions that they have never been asked before during their press tour — and she did. And it was hilarious.

Daisy Ridley And Gwendoline Christie Have Cool "Walk Up" Music

A "walk up" song is a tune that an athlete (mainly a boxer or MMA fighter) walks into the ring to — for instance, Ronda Rousey walks into the ring with "Bad Reputation" by Joan Jett. Kaling asked some of the women of the cast what their "walk up" song would be or what gets them in the pumped to play their characters. Ridley cited "I Will Make A Man Out Of You" from Mulan as hers, while Christie said that she rocks out to "Kashmir" by Led Zeppelin while donning the metallic Storm Trooper suit. She even performed some of the song with Oscar Isaac and John Boyega while on stage — hand banging and all.

Maz Kanata Has Some Ties With Yoda

So far, all we have known about Maz Kanata, played by Lupita Nyong'o via motion capture, is that she is a former pirate turned bar owner. During the press conference, Abrams gave us a big reveal, saying, "I do believe that Maz and Yoda, at some point, crossed paths. But that is not something that happens in this film." Whoa! Maz and Yoda may have been buds!

Oscar Isaac And Carrie Fisher Had The Best "Party Trailers"

Kaling pointed out that every movie set has a trailer where everyone "parties." She asked Isaac, whose trailer was the "party trailer"? Isaac jokingly said his and then told a story how he bought his uncle to set one time and lost him only to find out that he was hanging out with Carrie Fisher and her dog, Gary in her trailer.

The world may think that Harrison Ford is cool because of the swagger he brought to Han Solo, so you would think his kids would think the same thing, right? Wrong. "My kids don't think I am cool," he said during the press conference. "This movie will not convince them otherwise."

When Kaling asked Christie what other Star Wars character she would love to play, she said "Han Solo." She then said that she doesn't have even the slightest "modicum of swagger" that Harrison Ford has to pull it off. I beg to differ. If she can pull of Brienne of Tarth in Game of Thrones, she can pull of Han. Get it girl.

Are Finn And Mace Windu Related?

There have been theories that Finn, played by John Boyega, is related to Mace Windu, played by Samuel L. Jackson in Episodes I-III. Of course, this is just a theory, but it became a somewhat of a reality when Boyega was at a party and was tapped on the shoulder. He turned around it it was Jackson. He said, "Yo! Black Jedi! It's my son!"

There Will Be No Jar Jar Binks And No Ewoks In The Force Awakens. AT ALL.

People let out a sigh of relief and erupted in cheers when they found out that Jar Jar Binks is nowhere to be found in The Force Awakens. As for ewoks, I personally don't mind them, but they will not appear in the movie. Ford joked that it was in his contract that he wouldn't appear in the movie if Ewoks were in it and Carrie Fisher said that there aren't any Ewoks in the movie "that we are aware of."

The press conference may not have given us tons of answers, but it definitely gave us some stories to laugh about.