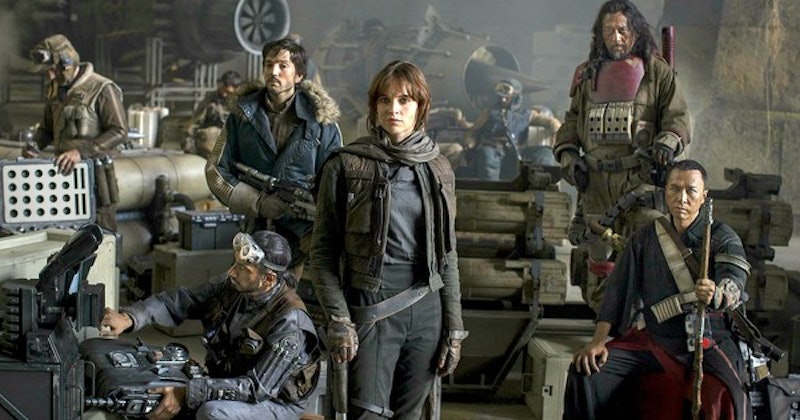 Star Wars: The Force Awakens is almost here. It's the first Star Wars movie in a decade, but there won't be such a wait before the next one. That's because Rogue One: A Star Wars Story hits theaters next year. But how does Rogue One connect to Force Awakens ? It's already well-known how The Force Awakens connects to the Star Wars universe at large. There was the original trilogy, which began with Star Wars (A New Hope) in 1977 and ended with Return of the Jedi in 1983, that told the story of Luke Skywalker and the rest of the Rebel Alliance doing battle against Darth Vader and the evil Empire. Now, The Force Awakens takes place thirty years after that by continuing the story of those involved as well as introducing several new characters as it kicks off a new trilogy. So where does Rogue One fit into all of this?

Well, in addition to the original trilogy, there was the prequel trilogy. The films kicked off in 1999 with The Phantom Menace, and ended with 2005's Revenge of the Sith, and these films detailed the early life of Vader and the rise of the Empire. Anakin Skywalker (Luke's dad) becomes Darth Vader at the very end of Revenge of the Sith, but by the time A New Hope rolls around, Vader is already a very established and in-control villain. So what happened in between? That's where Rogue One comes in.

Rogue One is the first of the Star Wars anthology movies, meaning it's a standalone film whose story is on the periphery the main saga. It takes place somewhere in the interim between Revenge of the Sith and A New Hope, likely right before the events of the latter, and tells the story of a group of rebels who steal the plans for the Empire's original Death Star seen in A New Hope. Most of the characters will be new characters that fans have not seen before, so there's a good chance that several won't survive the mission in what sounds like is going to be a high stakes, outer space heist movie. The theft that's going to be depicted in the film is actually referenced in the opening crawl in A New Hope, and sets the stage for that film's plot:

Rebel spaceships, striking from a hidden base, have won their first victory against the evil Galactic Empire. During the battle, Rebel spies managed to steal secret plans to the Empire's ultimate weapon, the DEATH STAR, an armored space station with enough power to destroy an entire planet.

Not much else is known about Rogue One other than the announced cast, and it's all new faces; including Felicity Jones, Diego Luna, and Mads Mikkelsen. As far as characters from The Force Awakens showing up in Rogue One, there's certainly a possibility, but nothing is confirmed. It would make sense to help newer fans, who may be less familiar with the original trilogy, to be able to connect this new prequel to the current Star Wars universe. The character who would make the most sense to appear would probably be Leia, since she is in possession of the stolen plans in A New Hope. However, since Rogue One takes place about 35 years before The Force Awakens, Carrie Fisher reprising her role in the new film seems unlikely. R2-D2 could show up, since he was the Rebel Alliance's way of getting the word out about the plans in A New Hope. Or maybe some of The Force Awakens' new characters who have lived long lives, like Lupita Nyong'o's 1,000-year-old Maz Kanata, could pop up in a ret-conned role filling in their backstory.

Rogue One's connection to The Force Awakens will be tenuous given the time gap between the films, but you can bet Disney will be looking for ways to link the two films for the new generation of Star Wars fans. Whether that will be in the form of character crossovers or winking references, fans will probably have to wait another year to find out: Rogue One hits theaters in December 2016.