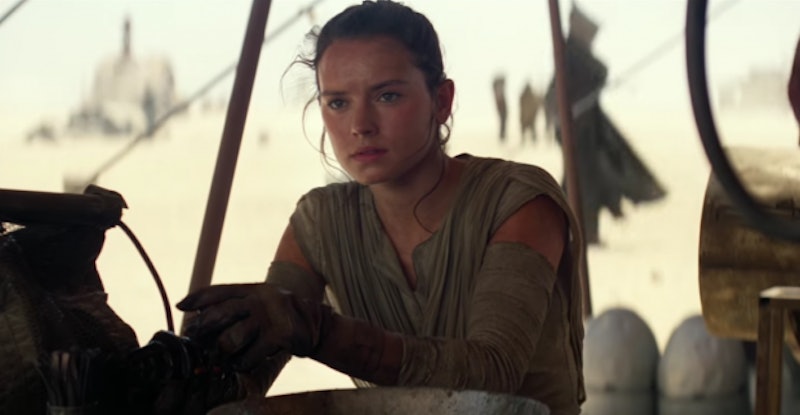 What's not to love about Daisy Ridley, who plays Rey in Star Wars: The Force Awakens? A new face to the franchise, Ridley, 23, also comes as a wave of feminist fresh air as the series' new female lead, and arguably the first woman to truly lead a Star Wars film. We've had Princess Leia (portrayed by Carrie Fisher) and Queen Amidala (portrayed by Natalie Portman) from Star Wars film predecessors, but Rey feels particularly different — from what we've seen of her, she appears to be pretty scrappy and independent. Awesome, right? But will she be sticking around for the long haul? How many Star Wars movies will Daisy Ridley be in, according to her contract?

Well, unlike most questions about the new Star Wars films, this one's a little easier to unpack. We know that Ridley has described Rey as "an amazing character" in a behind-the-scenes video for the upcoming movie. Ridley also said, "I hope that women and men all across the world get to see something they relate to in Rey: a strong woman who kind of does her own thing and has her own story." Well, get excited guys, because not only will she be introduced in The Force Awakens, the plan is that Ridley will also appear in next two Star Wars movies, reports Deadline.

Star Wars: Episode VIII is slated to be released in theaters on May 26, 2017 with Rian Johnson confirmed writing and directing the second film of the sequel trilogy. Jurassic World director Colin Trevorrow is confirmed to direct Star Wars: Episode IX, an announcement made at this year's D23 according to The Hollywood Reporter. Episode IX will be released in 2019, so Ridley has a long journey ahead of her — and she comes from pretty humble beginnings.

Ridley, who hails from London, told the New York Times in a recent interview that her last job before The Force Awakens was working at a beer and ale house. Ridley's pretty much come from small television and film roles to bartender to starring in one of the most popular movie franchises of all time. Ridley told the Times that director J.J. Abrams himself called her to let her know she had scored the role of Rey. And while not much else is currently known about Rey, one rumored that's sprung up from the well of The Force Awakens theories positions Rey to be even more of a crucial character than any of us can imagine. The mystery surrounding Rey may be due to a familial connection.

During a television interview earlier with year on a Japanese TV network, Ridley kept on repeating the phrase "solo-tary instead of "solitary," reports the Mirror. "I’m not sure how much I can say. I guess because I’ve said that I’m solitary, and that’s how I begin, that is probably a big clue as to what i​t is," Ridley said about Rey's character. Executive producer Kathleen Kennedy also said that she took note of how often Ridley spoke about her family. "We began to realize that many of the things about Daisy are the things that are inside the character that is played in the movie that is Rey," Kennedy said. Han Solo and Leia are also confirmed to be appearing in The Force Awakens so hmm.

If this rumor happens to be true, then it's entirely possibly that Rey may be picking up after the legacy of her parents and become just as well-known to the Star Wars series as Han Solo and Leia. I, for one, will be keeping my eyes peeled for Rey and Ridley's next moves — the (potential) rise of a legendary character is something that you don't get to see everyday. And besides, there's something really cool about the idea of the new generation coming up admiring a space opera heroine like Ridley in the same way may Star Wars fans have come to admire her maybe/maybe not father. Regardless, may the Force be with her. Star Wars: The Force Awakens opens in theaters Dec. 18.