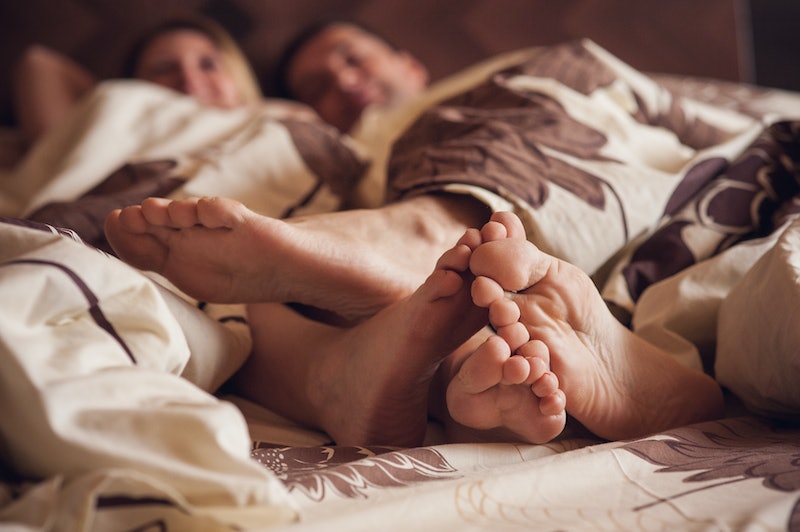 Although your friends and family are likely to advise against it, many of us are guilty of having sex with an ex. Even if we know it’s a bad idea, sometimes the desire for familiarity or the need to fulfill the “just one last time” thinking overtakes us and suddenly we're in bed with an ex, wondering how we're going to justify it in the morning. A lot of us have been there.

Because sleeping with your ex is such a fairly common occurrence, the sex toy company, Adam & Eve, decided to do some scientific research on the matter. The company took a poll of 1,000 adults, ages 18 and up, and asked not just who’s slept with an ex, but why they slept with an ex. Were they hoping to get back together? Was it some drunken regrettable thing that weighed on the brain for months? Naturally, the answers varied.

While reasons behind sleeping with an ex vary from person to person, according to Dr. Kat Van Kirk, a sexpert at Adam & Eve, a lot of it has to do with the comfort of having been with the person before, and it’s not necessarily always a bad thing.

"With an ex, there can be familiarity and comfort. As long as both partners are on the same page, it can be mutually satisfying. It is when one person engages in the act with ulterior motives that it becomes a problem,” say Van Kirk.

If you’ve had sex with an ex, here’s your big chance to know if you’re in the majority or the minority. Here are five findings about ex sex that Adam & Eve uncovered.

1. More Women Than Men Sleep With An Ex

Apparently, when it comes to ex sex, women are more likely to go down that road than men. As the survey found, of the respondents who have slept with an ex, 54 percent were female and 44 percent were male.

2. The Majority Of People Haven’t Had Sex With An Ex

Although more women than men have gotten it on with an ex, overall, 56 percent said they had not had sex with an ex. I don’t know if we can label these people wise or missing out… I guess I’ll take the responsible route and choose the former.

3. It’s About Comfort For Most People

As Van Kirk mentioned, having sex with an ex provides comfort that you’re just not going to get with a one-night stand, because obviously. Since that’s the case, the reason with the highest percentage, at 37 percent, was comfort and that cozy feeling of the familiar.

4. More Than 10 Percent Are Looking For A Reconciliation

Although I have had sex with multiple exes, I can at least say I was able to look at the hookups as JUST hookups, because clearly we were no longer together for a reason. However, for 14 percent of people who admitted to sex with an ex, they really had their hopes and heart set on reconciling with their ex. However, conversation, not sex, is probably the best route to take in this particular situation.

5. Some Have Sex With An Ex For Revenge

While I’m not sure how revenge can come from having a night of hot sex with an ex, for five percent of people, that was their sole motive. I guess if you really wanted to screw over an ex, you could get them turned on beyond belief then bail, but I’m still unclear as to how banging an ex is revenge, especially since you’re obviously great in bed. Why give that awesomeness to an ex? You can save it for someone totally worthy of your time and skills.