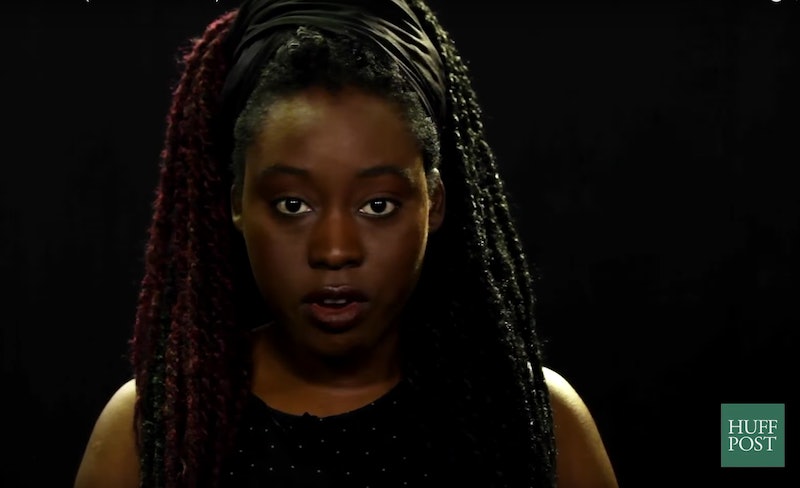 Women are treated differently than men in our society, but we're all so used to it that oftentimes, it doesn't register. Until, of course, you hear it all at once. That's the conceit of The Huffington Post video "48 Things Women Hear In A Lifetime (That Men Just Don't)." It's powerful, heartbreaking, angering, and so may other things. As women, we're all so used to having this stuff come our way that it sometimes doesn't even occur to us that half the country never has to deal with it at all. And that in and of itself is upsetting.

Women deal with a lot of inequality in our society. From unequal pay to unequal political representation to the prevalence of violence against us, there are so many ways that we are disadvantaged and oppressed. And even though we have made great progress in making things more equal, women are still treated as "other" in this country. And those unequal power dynamics are reinforced through seemingly normal comments, among many other things.

People have been working on these problems for a long time already, and unfortunately, we will probably have to keep fighting for a long time to come. But in order to change the place women occupy in society, we will also need to change the subtle, underlying attitudes about women that are reinforced through comments that men simply never have to deal with.

Here are just eight examples of things women hear, from the time we're children to the time we're elderly, that men never do. Scroll down to watch the full video for all of them.

Boys aren't told to equate unwelcome behavior, meanness, cruelty, or abuse with love. Girls are taught this from the very beginning.

Boys aren't told that their simple presence is a distraction to others — and especially aren't taught that this negates their right to be in certain places, to wear certain clothes, or to do certain things.

3. "Stop Being Such An Attention Whore."

Guys can seek attention without being shamed for it. But if girls think they deserve attention, that's another story.

Though women are expected to deal with periods as a matter of course — and to never speak about them publicly — somehow, if one shows any signs of being upset, it must be because she's on her period. Guys don't have to deal with people dismissing what they think or feel because of a biological phenomenon that may or may not be occurring.

There are some men who seem to think that women never get rejected. It might just be because society tells women that rejection is something we have to accept and deal with, while it tells men that they are entitled to women's time and attention. Men never have to deal with a woman lashing out because a guy wasn't interested, but women deal with that from men all the time.

6. "Are You Planning On Working After The Baby's Born?"

Men don't have to deal with huge existential crises about what to do with their lives after they have children. Women, on the other hand, are going to face judgment no matter what they choose.

7. "Your Husband Cooks Dinner? You Really Have Him Well-Trained!"

No one is surprised, on the other hand, when women make contributions around the house.

8. "You Must Have Been Beautiful When You Were Younger."

Men aren't expected to stay looking like they're 25 for their whole lives, and male celebrities are often even held up as attractive in their 40s and 50s. Men also aren't judged first and foremost on their looks. Women, on the other hand ... well, you know where this is going.

You can see all 48 comments in the video below. The most difficult part? There are many, many more that aren't in it — but you can usually hear them just by living your life.

More like this
25 Inspiring Quotes From Black Women To Celebrate Black History Month
By Kyli Rodriguez-Cayro and JR Thorpe
24 History-Making Black Women You Probably Didn't Learn About In School
By Ayana Lage and JR Thorpe
Twitter Is Identifying With Sally Field & Jane Fonda’s Friendship In New Viral Video
By Jake Viswanath
21 Galentine’s Day Memes To Celebrate Your Best Friends
By Meghan Bassett and Mia Mercado
Get Even More From Bustle — Sign Up For The Newsletter
From hair trends to relationship advice, our daily newsletter has everything you need to sound like a person who’s on TikTok, even if you aren’t.