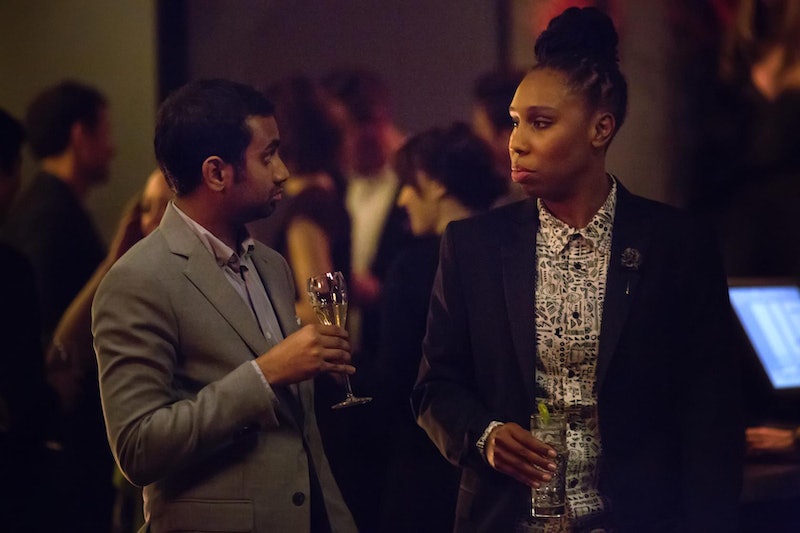 On Master Of None, Aziz Ansari's character Dev goes into an audition for a part that would have him playing a cab driver. When he sits down in the waiting room, it's filled with Indian men, and, when he goes in to read his lines about a missing girl he had once driven, he's asked to do a stereotypical, highly-offensive Indian accent. Though the resulting exchange is funny, it's also sad, since this encounter from an episode called "Indians On TV" probably isn't too far for what it's like to be an actor or actress of color. For too long, these performers have been asked to play stereotypes, caricatures, one-dimensional versions of who they really are. But, in 2015, television made strides to change that, casting numerous shows so that the world of TV looked more like the real one we all live in. I would even go so far as to say that 2015 was the most diverse year of TV... so far.

It's safe to say we have Shonda Rhimes to thank for this, who, last spring, declared, “I am making TV look like the world looks." And, since Grey's Anatomy debuted a decade ago, she has been, casting her ABC shows with a diverse array of actors and actresses. Other networks, specifically streaming ones, have started to take notice of the "Shonda Effect," which is an empire that includes additionally diverse shows like Scandal — which, after premiering in 2012, became the first network drama with a black woman as its lead in nearly four decades — and 2014's How To Get Away With Murder, which stars African-American actress Viola Davis — who became the first black women to win the Emmy for Best Lead Actress in a Drama.

Though, if you ask Rhimes, she will tell you she's not diversifying TV, she's "normalizing" it. Her color-blind casting choices are not about filling some sort of quota, like has too often been true when it comes to hiring minority actors; it's about making TV something we can all look to for strong role models.

This approach is similar to what Ansari's doing over at Netflix with Master Of None. He's not only writing and starring in the first show to star an Indian-American actor — Mindy Kaling became the first Indian woman to star in her own series in 2012 — but casting other people of color to play supporting roles as his friends, like Taiwanese-American actor Kelvin Yu and African American actress Lena Waithe. Neither of these two have to represent a whole group of people; they're simply able to portray three-dimensional characters, something that is especially important. This year's rise in diversity wasn't just about seeing non-white characters on TV. It was about creating well-rounded characters of different races and nationalities that people could love, loathe, and look up to.

When you turned on the television this year, you could watch Fresh Off the Boat, a show that looks at an Asian-American family who moves to mostly white suburban neighborhood, or black-ish, which focuses on an upper class black family and has no problem tackling race in an important and funny way. You could watch Empire, which continued its ratings reign, even expanding overseas, and features not only a mostly African-American cast, but two queer characters. You could Jane The Virgin on the CW, which features nearly an entire cast of Hispanic men and women, led by star Gina Rodriguez.

You could watch The Flash, the DC Comics adaptation, which started as a spin-off from The CW hit Arrow, and has been called "“the most diverse superhero show on TV," thanks to its choice to cast two African-American actors to play the title character's adopted parents, even though he is white. “You want to go to a place where you work everyday where you get to tell stories that look and feel like the audience in America that are watching,” showrunner Greg Berlanti said. Another superhero show, Supergirl, also chose to cast against the comic book type, hiring a black actor to play Jimmy Olsen.

This fall also saw the premiere of Rosewood, starring Morris Chestnut, Quantico with Bollywood star Priyanka Chopra, and Dr. Ken, which stars Hangover standout Ken Jeong in a show based on his time working as a doctor. Jerrod Carmichael was the star and creator of The Carmichael Show, which is based largely on the black stand up comedian's family and personal life, and tackled Black Lives Matter, gun control, and religion in its debut season. On cable networks, there was the second season of Fargo, which had an American Indian actor in a supporting, but crucial role, as well as a black actor.

This year's television lineup also expanded the definition of what "diverse" means. How To Get Away With Murder included a story line about a character coping with an HIV diagnosis, and Ryan Murphy's Scream Queens, which definitely wasn't PC, but was tongue in cheek about its portrayal of different races and nationalities, cast a deaf actress in a supporting role.

It's true looks can be deceiving, but the numbers don't lie. According to GLAAD's recent annual survey of television's diversity, the group found that, of all the regular characters on broadcast television (not including streaming platforms like Hulu, Amazon and Netflix), 16 percent are black, the highest percentage since GLAAD started doing the survey 11 years ago. Overall, GLAAD found people of color made up up 33 percent of series regulars on broadcast TV — up six percent from 2014, and 10 percent from 2013. The group counted a total of 162 LGBT characters on scripted broadcast series, plus an additional 109 recurring characters. For the first time, GLAAD also looked at the LGBT characters on original series that premiered on Amazon, Hulu, and Netflix and counted 43 series regulars and 16 recurring LGBT characters across 23 series like Orange Is The New Black, Transparent and Sense8.

But, even though the numbers are at the highest they've ever been, that doesn't mean everything is fixed. GLAAD's study found that, though up 3 percentage points from last year, there is still a lack of female leads on broadcast TV at only 43 percent. Specifically, African-American female characters are down this year. There is also very little representation of LGBT people of color, and though it is growing — cable saw a 6-percentage-point drop in that demographic since last year — it's still a slow-go. Trans representation is also a weak spot for television, with no trans characters on broadcast television, and only three on cable.

And, behind the scenes, well, it's not nearly as diverse as what you see on screen. A Writers’ Guild of America report released earlier this year noted that staff employment for people of color actually decreased between the 2011 to 2012 season (when it was at its peak) and 2013 to 2014 season, from 15.6 percent to 13.7 percent. Focusing on diversity across the board, specifically hiring women directors, could also help when it comes to expanding roles for men and women of color.

More like this
Julie Andrews Revealed A Surprising Behind-The-Scenes 'Bridgerton' Detail
By Grace Wehniainen
Viktor Hargreeves’ Coming Out Scenes Are The Sweetest Part Of Umbrella Academy Season 3
By Gretchen Smail
Lilibet & Prince Charles’ First Meeting Was Emotional, According To Reports
By El Hunt
'Mean Girls' ​​Daniel Franzese Spoke Candidly About Conversion Therapy
By Rachel Mantock
Get Even More From Bustle — Sign Up For The Newsletter