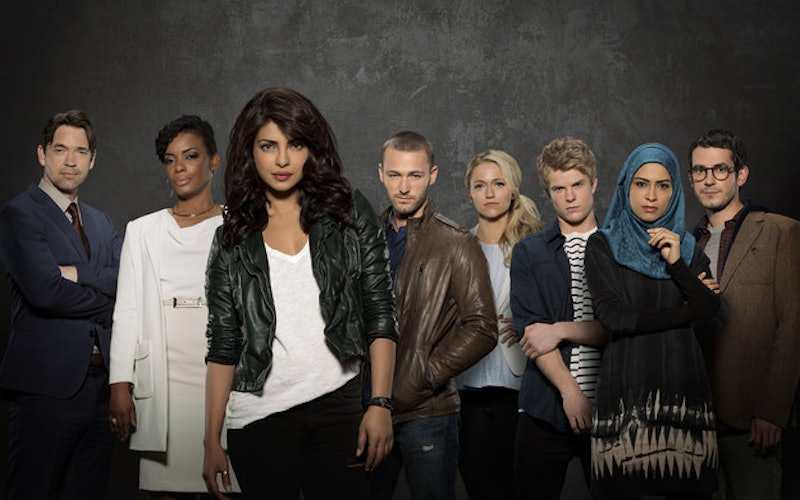 It shouldn't be news to anyone that television (as well as movies, books, etc...) is not exactly known for its diversity. Series made by white people are starring white people are the norm, and while a few exceptions do exist, they're exactly that — exceptions. Shonda Rhimes may be changing TV, yes, but she can't be doing it all alone. Thankfully, the upcoming 2015-2016 season is trying to fix this imbalance; of the dozens of shows picked up and renewed by the major networks for the upcoming year, a startling percent contain diverse casts.

There's Quantico, an FBI ensemble featuring all different races and ethnicities; Dr. Ken, a comedy about an Asian-American family; Uncle Buck, an ABC reboot of the '80s movie starring an all-black cast. And then there's the Latino-starring Jane the Virgin, renewed for its second season; Fresh Off the Boat, back for another round; and, of course, all three Shonda Rhimes shows, plus a new one, The Catch, all known for their diversity.

Overall, it's a stellar season for bringing POC to the small screen, with more shows starring non-white casts than any other in recent memory. Of the 24 new series picked up by the five major networks — ABC, NBC, CBS, Fox and The CW — an impressive nine of them feature casts with significant diversity, and that's in addition to the dozen renewed shows with POC in lead roles.

Although that number is certainly smaller than it should be, it's still a vast improvement from the years in which you'd be hard-pressed to find a single non-white face in all of network TV. Hopefully, many of these shows will succeed, and studios will be forced to confront the fact, once and for all, that POC can sell TV, too. Isn't it time already?

Below, nine of the most diverse new shows coming our way:

ABC just picked up this comedy from Community star — and real-life doctor — Ken Jeong about Dr. Ken, a physician struggling to balance work, marriage, and fatherhood. The show co-stars Suzy Nakamura as his wife, and features a largely Asian-American cast.

This ABC drama revolves around a group of FBI recruits, one of whom is suspected of leading a terrorist attack on New York City. The cast features actors from all different races and ethnicities, including Aunjanue Ellis, who is black; Priyanka Chopra, who is Indian; and Yasmine Al Massri, who is Palestinian and Egyptian.

The ABC reboot comedy, based on John Candy's 1989 film, stars an all-black cast led by Mike Epps of Hangover fame. Like in the movie, he'll play an immature nanny given care of his nieces and nephews. Nia Long, Sayeed Shahidi, and Aalyrah Caldwell also star.

NBC is introducing this comedy, about two sets of neighbors who become best friends. One couple is white, the other is black. It's being co-produced by Ride Along's Will Packer, who's also behind Uncle Buck.

This NBC workplace comedy stars America Ferrara, the actress best known for her Emmy-winning role on Ugly Betty, making it one of the few shows on TV to feature a Latino star.

In the CW thriller from Vampire Diaries' Julie Plec, a deadly epidemic leads to a mass quarantine, and those stuck on the inside must fight for their survival and try to keep the peace. David Gyasi and Christina Moses star, marking the first time the CW has ever had a show with two black actors in the lead roles.

Shondaland's newest ABC series stars Mireille Enos in the lead role, but its supporting cast includes several black actors, such as Alimi Ballard and Rose Rollins. It's a Shonda Rhimes-produced show — if you're worried about the cast being diverse enough, don't be.

Of Kings and Prophets

This ABC Biblical drama is told through the eyes of three men: a king, a prophet, and a young shepherd. As the source material suggests, the cast is diverse, including Maisie Richardson-Sellers, who is black; Haaz Sleiman, Lebanese; and Mohammad Bakri, who is Israeli.

More like this
Viktor Hargreeves’ Coming Out Scenes Are The Sweetest Part Of Umbrella Academy Season 3
By Gretchen Smail
What’s New On Netflix: Lana Condor’s Ghostly Comedy & A Sexy Reality Series
By Arya Roshanian
What’s New On Netflix: 'Stranger Things' & 'Mean Girls'
By Arya Roshanian
Here’s Everything Coming To & Leaving Netflix In July
By Grace Wehniainen
Get Even More From Bustle — Sign Up For The Newsletter