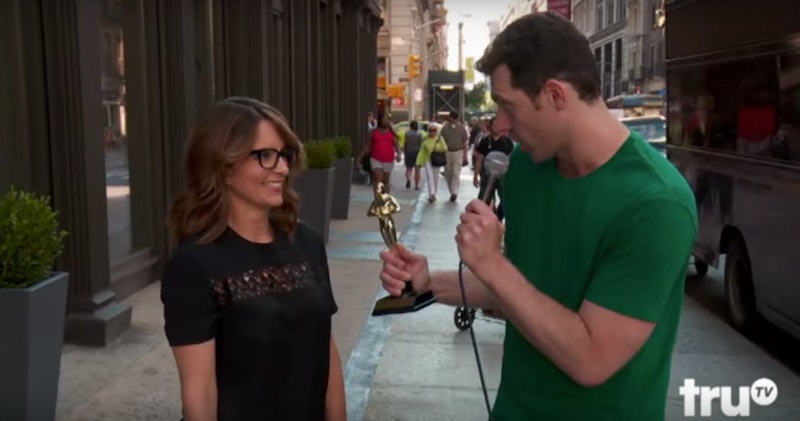 Though it's great (read: genius) to see a Tina Fey and Billy Eichner combo right in front of my face, I can't help but politicize this particular episode. That's probably because making Tina Fey name 20 Latino actors/actresses in a 60 second fake Oscar speech (properly titled "LaTina Fey"), seems a bit too on the noise to be taken for anything other than an actual comment on Latino representation in Hollywood. This representation has been put under scrutiny — and rightfully so, in my opinion — for quite some time now, and this skit does nothing if not remind us that we still have quite a ways to go.

Having Eichner scream in your face "Latinos, yes more Latinos!" while you're being timed is intimidating and would cause anyone to blank, but Fey's inability to name 20 Latino performers says a lot about the conversation regarding Latinos in Hollywood, in the sense that we don't have enough of them represented in the mainstream sphere of fame. Because, after all, how can we include Latino performers in our conversations around TV and entertainment culture, how can they become easily accessible for us to remember and name off, if they don't get the same opportunities in TV and entertainment culture as white performers?

Stars like Gina Rodriguez and Sofia Vergara have been vocal about proper representation — and, hey, it looks like maybe they're not the only ones willing to talk about it anymore. Whether that was his intention or not, Eichner's skit is a great way to open that dialogue. His points may be dressed in comedy, but I'll take 'em. Maybe this season will feature some more culturally relevant points like this one. The bar has certainly been set high.

Check out the skit below:

And make sure to catch Billy on the Street starting October 8 on truTV.