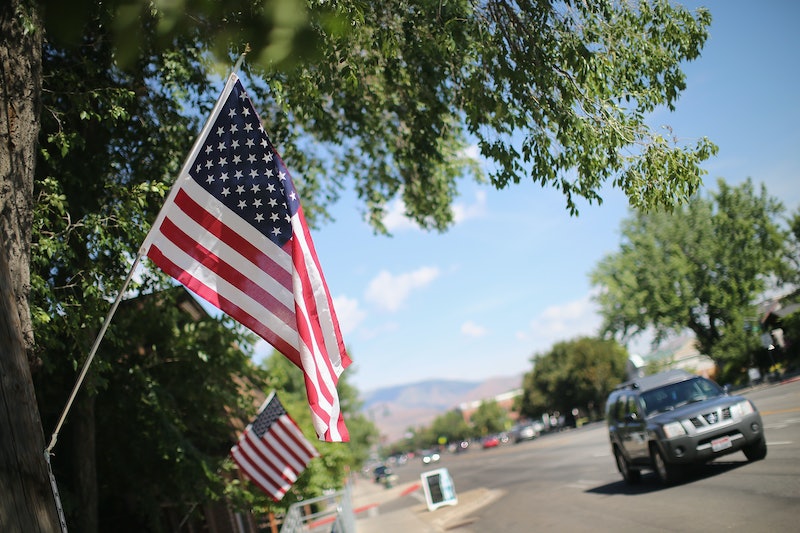 Now that the first podcast of Serial season 2 about Bowe Bergdahl has been released, it offers a characterization of him that conforms to neither the hero nor the villain camp. While much of the public sentiment about Bergdahl has seemed to err on the side of painting him as a "traitor," it seems so far that Serial won't fall into that narrative. Like it delved into both sides of Adnan Syed's case in the first season, it'll likely do the same this time around.

Sgt. Bergdahl was captured by the Taliban in 2009 after leaving his post in Afghanistan and wasn't rescued until 2014. Held as a prisoner for five years, Bergdahl is considered the longest-held war U.S. prisoner of war since Vietnam, according to The Guardian, and is the longest-held prisoner of the Taliban in history who didn't die in captivity. President Barack Obama made an exchange for his release for five Guantanamo prisoners, a decision that's proven to be intensely divisive and has received immense media coverage.

Obama announced Bergdahl's rescue in a lavish Rose Garden ceremony, but a number of Republicans remained unconvinced. At a Las Vegas rally, Donald Trump said Bergdahl's behavior never would have been accepted 30 years ago.

We're tired of Sgt. Bergdahl, who's a traitor, a no-good traitor, who should have been executed.

Some of Bergdahl's fellow soldiers were also displeased at the prospect of him being referred to as a hero. Former Sgt. Matt Vierkant was a member of Bergdahl's platoon and provided an early counter to Obama's triumphant announcement that Bergdahl had been released.

I was pissed off then, and I am even more so now with everything going on. ... Bowe Bergdahl deserted during a time of war, and his fellow Americans lost their lives searching for him.

Serial's Sarah Koenig provides an alternative narrative that isn't so quick to portray Bergdahl as a traitor just yet. "DUSTWUN," the title of the first episode, is named after the radio signal sent out when a soldier is taken captive or goes missing in the combat field. According to the podcast, which relies heavily upon Zero Dark Thirty journalist and screenwriter Mark Boal's recorded conversations with Bergdahl, the sergeant had planned on causing a "DUSTWUN" to draw attention to the lack of leadership within the platoon. During his conversations with Boal, Bergdahl explained that his intentions were founded.

All I was seeing was, basically, leadership failure, to the point that the lives of the guys standing next to me were, literally, from what I could see, in danger of something seriously going wrong and somebody being killed.

Koenig explains that Bergdahl's unique case scenario, in which he pre-planned his escape, sets him apart from the popular perception of an American traitor.

It means Bowe doesn't fit into any of the AWOL or desertion scenarios we're used to hearing. He wasn't cavorting, he wasn't drunk or goofing off, he didn't drop his weapon and flee in the middle of a fire fight, he didn't decide in a burst of panic or confusion to go walk about, instead, slow, simmering, and methodical, Bowe created a plan.

Nonetheless, many in the public has aggressively condemned Bergdahl as un-American and disloyal since his homecoming to the States. In addition to media coverage — which never included an interview with Bergdahl himself — the fact that his decision to leave his unit was illegal has contributed to his villainous characterization. Initially following the sergeant's return home, a senior Defense official said he didn't think Bergdahl would be charged after having spent five years as a Taliban captive, CNN reported. Things changed as the comments from his fellow unit members surfaced and painted him in a light of unforgivable disloyalty. In March, the Army charged Bergdahl with two counts: "desertion with intent to shirk important or hazardous duty" along with a count of "misbehavior before the enemy by endangering the safety of a command, unit or place." The desertion charge could result in a sentence of life in prison.

A soldier from Bergdahl's unit who was interviewed by Serial commented unfavorably on the potential implications of the podcast, saying "I get it that ... Serial is trying to make a nifty diorama for hipsters to marvel at, but I think it's the height of crassness for them to do this when it could potentially affect the legal proceedings."

With the first episode of the second season, Serial has resisted the black and white interpretation of Bergdahl's actions, but only time will tell whether the podcast series will eventually fall into the dichotomous "Bergdahl is a hero" or "Bergdahl is a villain" troop. But considering how the first season left friends arguing over whether or not Adnan Syed was guilty or not, it feels like people will be left with a similar takeaway.

More like this
What Is Barack Obama’s Net Worth? He Makes *Way* More Now As An Ex-President
By Hugh McIntyre
Michael Peterson & Sophie Brunet’s Relationship Timeline
By Morgan Leigh Davies
ITV’s 'Grace' Will Likely Return for A Third Season — & Many More After That
By El Hunt
All The Theories About Kathleen Peterson’s Death
By Morgan Leigh Davies
Get Even More From Bustle — Sign Up For The Newsletter