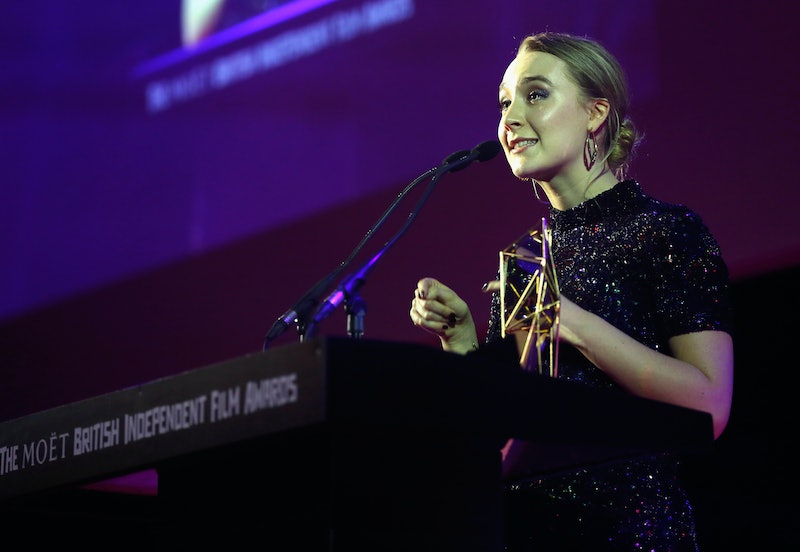 Irish actress Saoirse Ronan started earning attention with her role as Keira Knightley's younger sister in Atonement, steadily racking up credits including The Lovely Bones, The Grand Budapest Hotel, and now Brooklyn over the past 10 years. She's an obvious and worthy choice for the Golden Globe nomination for Best Actress, an award that has gone to the likes of Ingrid Bergman, Meryl Streep, Jessica Lange, and Charlize Theron over the course of its history. Yet despite her acclaim, somehow those three consecutive vowels in Saoirse trip up everyone from fans to fellow stars. Here's how you pronounce Saoirse Ronan's name, for everyone out there (ahem, Dennis Quaid) who seems to have a tough time with it.

Just as the name "Siobhan" is pronounced "Shuh-von," different letter combinations in Saoirse's name make syllables that might sound difficult to the anglo-centric ear. And, contrary to how Dennis Quaid pronounced it when he announced her nomination for the Best Actress Golden Globe, it is not "Shee-sha." No, Saoirse is more like "SEER-sheh," emphasis on the first syllable and a slight accent on the second. This silly YouTube video ("Saoirse Ronan, I believe you have stolen my heart," the narrator says) does a far better job of breaking down the pronunciation.

Ronan explained the pronunciation to Us Weekly back in May: "I pronounce it Sir-sha like inertia," she said. And when Quaid mispronounced the name on the Golden Globes nomination announcement Thursday morning, Twitter leapt up in Ronan's defense with some incredulous responses. The mishap was likened, of course, to John Travolta's infamous botching of Idina Menzel's name at the 2014 Oscars, when he referred to her as "Adele Dazeem." Vanity Fair critic Richard Lawson picked up on another parallel — Elizabeth Moss's (seemingly very straightforward!) name being mispronounced as "Elizabeth Moths."

Correct pronunciation of the name of a famous and talented actress is important. It matters enough to take the five minutes out before presenting a nomination to learn how to say it properly. And just as Menzel sought her revenge the following year at the 2015 Oscars — she welcomed Travolta to the stage as "Glom Gazingo," Travolta admitting that he might have deserved that — Ronan may have her moment, too. We're watching you, Dennis Kay-Vood.

More like this
'Derry Girls' Sister Michael Isn’t As Fictional As You Might Think
By Olivia-Anne Cleary
You Can Thank 'Spider-Man' For The Meme-ification Of Movies
By Dana Schwartz
'Stranger Things' Star Joe Keery Is Dating An "Indie Scream Queen"
By S. Atkinson and Grace Wehniainen
Laura Dern Said “Cultural Awareness” Made Her Rethink This 'Jurassic Park' Fact
By Grace Wehniainen
Get Even More From Bustle — Sign Up For The Newsletter