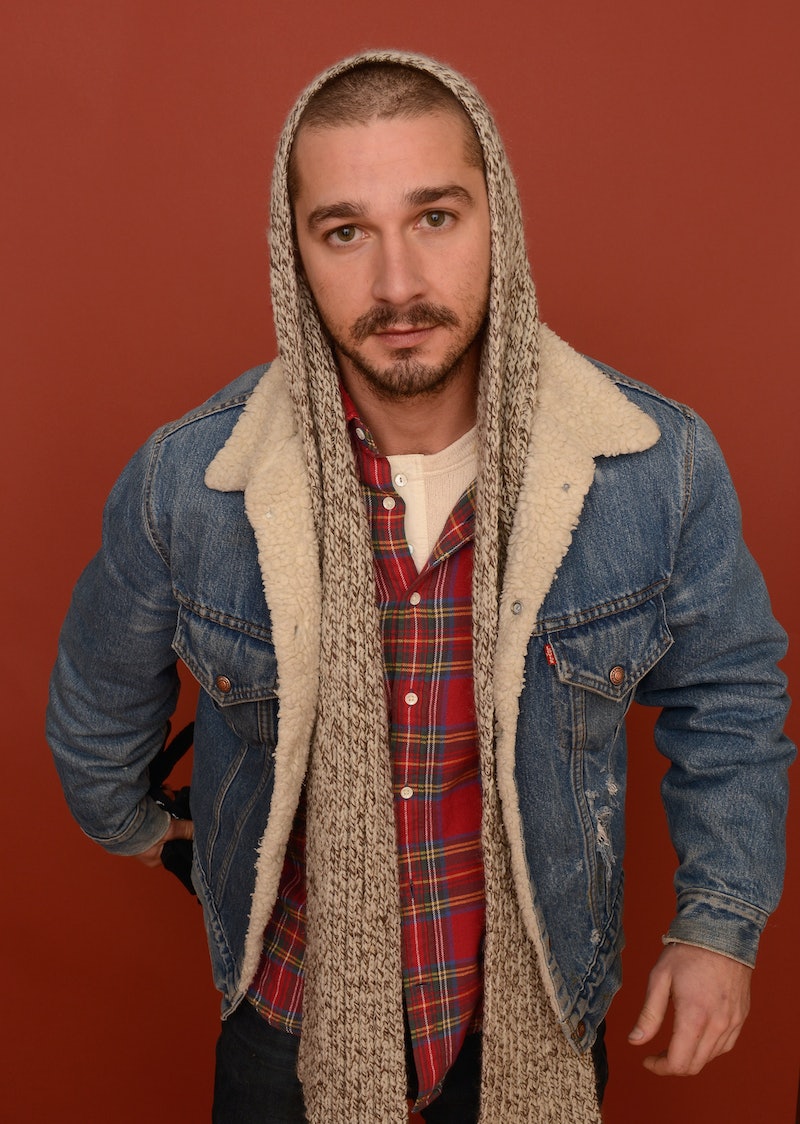 Shia LaBeouf did something else that drew a lot of attention to himself because of course he did. Last night, Shia LaBeouf got in a fight with a man at a bar in South London. The whole thing was caught on video and it appears that LaBeouf was trying to defend his honor (or something like that..?) when the man spoke badly about the mother of LaBeouf's girlfriend, Mia Goth. In the video, the man just sits there while LaBeouf yells in his face, "What did you say about my girl's mom? What did you just say?" At one point LaBeouf sort of headbutts the clearly drunken man — it's really more of a light shove that involves his head. Throughout the fight two women can be heard screaming "Shia!" in an attempt to get him to stop. All of this is to be expected from LaBeouf, especially since he recently retired "from all public life" and that obviously wasn't going to work out, but what was actually strange to watch was another video that was taken afterwards of LaBeouf explaining himself.

The second video shows LaBeouf speaking with a couple friends, possibly new friends or a bartender since one of them has an English accent, about what happened in the argument. "I'm not trying to have, like, anymore problems ... I accept what I gotta get into to do what I love and I'm not trying to shit on anyone," LaBeouf says while rolling a cigarette. He's clearly drunk, but he sounds like any regular drunk guy at a bar that just got in an argument. Could it be that Shia LaBeouf is just misunderstood?!

He goes on to say, "I'm a human being" to which one woman, laughing, responds, "I'm sure you are." He continues, "I'm super normal, like more normal than most, but when people are hostile or shit on my girl's mom or say things out of turn..." He trails off, but it's clear he means, don't mess with the LaBeouf unless you want what's coming to ya. (And what's coming to ya is a lot of screaming and some semblance of a headbutt, if that wasn't clear.)

Weirdly, Shia LaBeouf fighting someone and then explaining how he's "super normal" is the most normal LaBeouf has seemed recently. It's definitely less strange than the plagiarism, or the retirement from public life, or the Twitter confrontation of Jim Carrey, but hey, maybe our standards are just too low at this point.

More like this
Twitter Is In Awe Of Taylor Swift’s “Lavender Haze” Music Video
By Jake Viswanath
Zach Gilford Admits He Forgot Taylor Swift's Name When He Starred In Her Music Video
By Jake Viswanath
Everything To Know About The 2023 Grammy Awards
By Jake Viswanath
Twitter Can’t Believe The Madonna Biopic Is Scrapped & Fans Have A Solution
By Alyssa Lapid
Get Even More From Bustle — Sign Up For The Newsletter
From hair trends to relationship advice, our daily newsletter has everything you need to sound like a person who’s on TikTok, even if you aren’t.