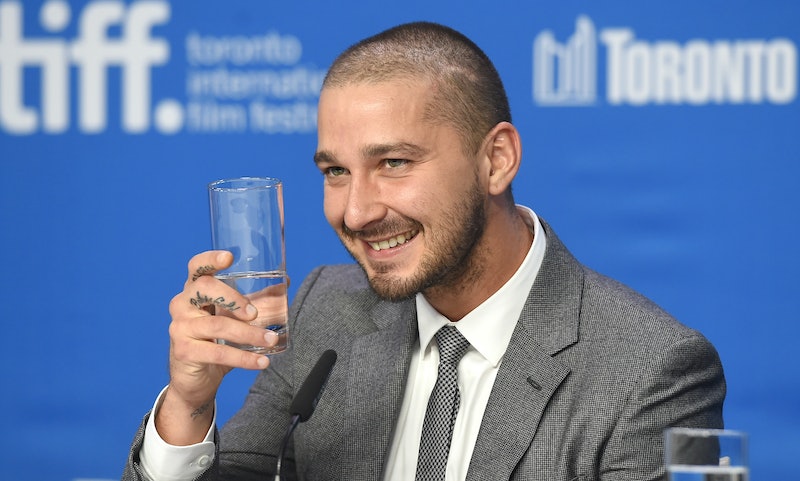 Shia LaBeouf continues to be the greatest human being alive. (Go on, fight me on it — I dare you!) His latest art project comes hot on the heels of his art installation #ALLMYMOVIES, during which members of the general public were invited to the Angelika in New York to watch (you got it) all of LaBeouf's movies with him, while a live stream of the actor's reactions was available on the Internet. How meta is that? LaBeouf's latest work, #TOUCHMYSOUL, has the actor at FACT in Liverpool, UK, where he is answering a dedicated phone line with the other members of his art collective, LaBeouf, Rönkkö and Turner.

You can watch a livestream of #TOUCHMYSOUL online now, so even if you can't get through (I've dialed, like, 500 times since this morning with no luck), you can watch him chat on the phone with other people who are infinitely more lucky than you. According to the collective's press release, "#TOUCHMYSOUL asks us how we can truly connect with another person across the networks, what this feels like, and how we can be moved by such an encounter." Any chance I get to connect with LaBeouf is one I will gladly take! But what would I speak to him about if he actually answered?

I'd love to ask LaBeouf if he's always been a dancer, or if, as in all his other projects, he just took a leap of faith. I also want to find out if Sia wears the wig that covers her face when she speaks to him, or if he actually gets to see what she looks like.

2. Indiana Jones And The Kingdom Of The Crystal Skull

I want to ask LaBeouf how he felt during the making of Indiana Jones and the Kingdom of the Crystal Skull. Speaking at Cannes in May 2010, LaBeouf said, "You get to monkey-swinging and things like that, and you can blame it on the writer and you can blame it on Steven Spielberg. But the actor's job is to make it come alive and make it work, and I couldn't do it. So that's my fault. Simple." His famously negative comments about his experience on the movie contributed to a bad public opinion of him. Personally, I think that LaBeouf can do no wrong. Haters gonna hate!

3. What He Dreams About

I realize it's probably a bit creepy if I ask LaBeouf what he dreams about. But I want to know.

One of my favorite songs of all time, Rob Cantor's legendary video, which celebrates LaBeouf in all his glory, is something to be watched again and again. Does LaBeouf love it? And more importantly, does he know all the words?

I'd ask him what he learned from watching all of his movies in reverse chronological order. And I also want to know if any crazed fans made the experience great or awkward.

It's a legit question.

In all likelihood, if I ever manage to get through to LaBeouf, I'll forget what I wanted to say. Totally shocked, the adrenaline will kick in, and I'll have no clue what to ask him. Awkward silence it is, then.

I'm going to keep on dialing over the next few days. But if I don't get through, it's good to know that the whole experience is being documented, and that this won't be the last art project he'll be a part of. There's always more Shia LaBeouf, and that's a great thing these days.