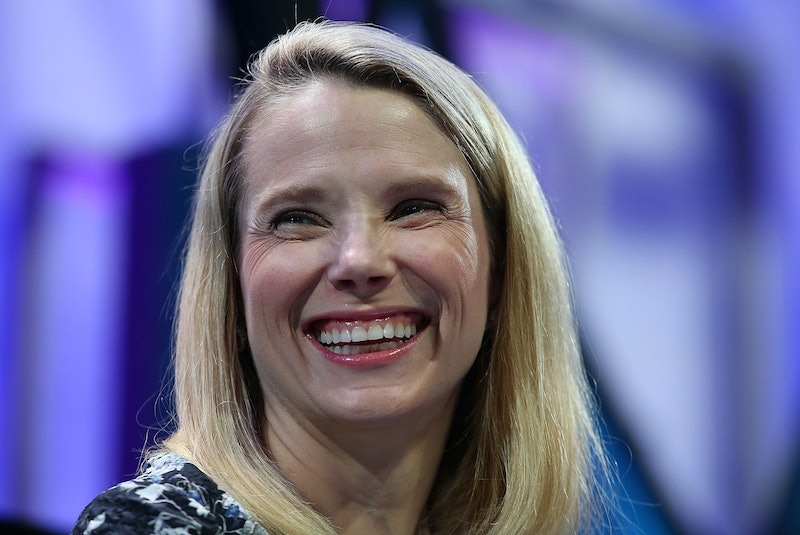 The tech world is abuzz with yet another baby announcement. Yahoo CEO Marissa Mayer gave birth to twins on Thursday. The identical girls were born in the morning and Mayer says that they and she are doing well. Mayer announced the pregnancy in September in a Tumblr post. She indicated that, as with the birth of her son Macallister in 2012, she would be working throughout her brief two-week maternity leave and taking no additional time off. Mayer said:

I plan to approach the pregnancy and delivery as I did with my son three years ago, taking limited time away and working throughout. I've shared the news and my plans with Yahoo's Board of Directors and my executive team, and they are incredibly supportive and happy for me. ... I'm extremely energized by and dedicated to both my family and Yahoo and will do all that is necessary and more to help both thrive. The future looks extremely bright on both fronts.

Mayer similarly issued a brief Tumblr post announcing that she had given birth, thanking supporters for their well wishes.

Mayer's pregnancy announcement and the birth of her twins came just after a baby announcement from another leader of a tech giant. Mark Zuckerberg and his wife, Priscilla Chan, recently welcomed their first child, a daughter named Max. In addition to vowing to give 99 percent of their Facebook shares to charitable causes, Zuckerberg also expanded the company's maternity and paternity leave. The four months allocated for both new mothers and fathers is now available to Facebook employees outside the United States.

Conversely, Mayer has made no such similar announcements. She's been previously criticized for her hard stance on taking such a brief maternity leave. Though Mayer did double the amount of parental leave to 16 weeks, she has so far refused to take the full amount. This has troubled prominent tech leaders as well as those who advocate for a better work-life balance across the country. Senior Vice President for Strategy at the Families and Work Anne Weisberg had this to say about Mayer's decision in an interview with The Guardian:

She's a role model and I think she should take whatever Yahoo's parental leave is — the mark of a great leader is that they have a strong team and don't need to be there all the time themselves. And she's having twins — just physically that's a big deal.

The announcement that both Mayer and her twins are healthy is fantastic news. Hopefully they both continue to do well, no matter how hard Mayer works in the weeks to come.

More like this
Sandra Bullock, Girlboss Extraordinaire
By Matt Harkins & Viviana Olen
Spice Girls’ Net Worth: The Richest Member Is Wealthier Than The Rest Combined
By Hugh McIntyre
Kourtney Kardashian Got Married In A Heart-Stamped Mini Dress
By Allie Fasanella
Playing A Scrub Nurse On 'Grey’s Anatomy' Made BokHee An Instagram Royalty
By Brad Witter
Get Even More From Bustle — Sign Up For The Newsletter